Could Your Child Be Better Off Dead? 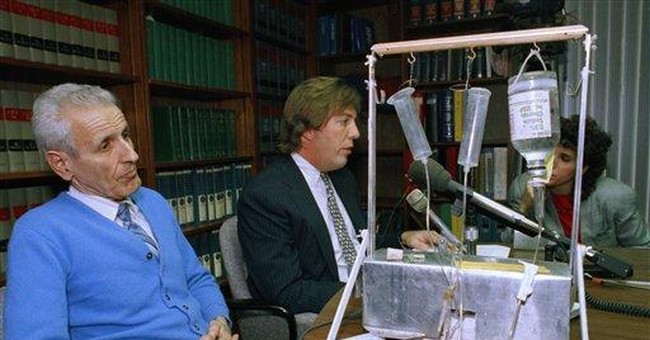 Pharmaceutical magnate Gigi Jordan is on trial for the murder of her son, and her story will wrench your heart. Jordan admits that she poisoned Jude, who was eight years old, deaf, and autistic. But she claims that the killing was justified: She was certain that Jude would be granted to the custody of his father, who had abused the boy sexually and was sure to abuse again. So her killing was not a murder, but a maternal act of mercy in a desperate situation. She didn’t murder her boy—she spared him unspeakable suffering.

Leave aside the obvious questions of fact that come to mind: Was Jordan lying about her ex-husband, falsely making a charge that is commonly used in custody battles? If he had molested Jude and she was willing to kill to stop him from raping the boy again, why choose to kill the victim instead of the perpetrator?

Much more important: Why would a savvy woman like Jordan, with top-notch attorneys, select this line of defense? The answer is obvious: Because she thought it would work, that at least one member of the jury would be tender-hearted enough to approve of her decision or excuse it.

And Jordan is right. There are millions of modern, enlightened Westerners who would rather kill their own child than see him suffer—even when the “suffering” involved is far from certain. Despite the mounting evidence that Down Syndrome children can lead very happy lives, Americans choose to abort (by some estimates) 90 percent of unborn babies diagnosed with this genetic condition.

Belgians marked Christmas 2013 by legalizing euthanasia for children, in cases not just of chronic pain but also “incurable illness.” The Belgian definition of “incurable illness” is quite expansive: The leading proponent of child euthanasia in that country, Dr. Wim Distelmans, euthanized two adults in 2012 who suffered from… blindness and back pain.

We have not yet gone full circle to the 1930s German definition of “life unworthy of life,” but the West is well on the way. Gigi Jordan is hardly a trendsetter.

It is one thing for someone in physical agony, or crushed by depression, to despair that any painkiller or therapy could ease his agony. Such people can certainly come to crave death as a welcome release. It is something else entirely for the rest of us, in full possession of our faculties, to coldly agree with them, check off a box, and assist with their deaths. Imagine a policeman who found someone on a rooftop planning to jump, who instead of talking the person down, assessed his prospects and nodded agreement. “You’re right. You’re better off dead.” Then he helped the person over the edge.

How do we justify such decisions to ourselves? It’s easy. We use the modern ethical theory that’s all the rage on college campuses, propounded by experts like Princeton’s Prof. Pete Singer, called “utilitarian hedonism.” Put simply, it says that life has no purpose and suffering has no meaning. Each living creature, human or animal, is a bundle of nerve receptors, capable of feeling pleasure or pain. That is all. We may not agree on anything else, but we all know that suffering is bad. And pleasure is good.

So our laws and institutions should be centered on reducing the net amount of suffering and increasing the pleasure quotient. We will “nudge” people when we can, and force them when we must, to make decisions that maximize the number of happy moments that they experience, and diminish the number of sad ones. If a handicapped person’s life would have many sad moments—and even worse, impose a great number of sad moments on their caregivers and the taxpayer—then it is right to put him to death.

By this standard, Gigi Jordan did the right thing. Her severely handicapped child would have enjoyed few of the perks of modern life. Jude would never learn to ski, or go to Princeton, or Tweet his friends. He would never earn a fortune in pharmaceuticals, or write an autobiography. Cruel teenagers might someday call him a “vegetable.” Jude’s care would cost millions of dollars, and his well-being would haunt his mother for the rest of her life. What a huge pile of very unhappy moments that child trailed behind him wherever he went! The brief unhappy moments Jude endured while he was dying paled by comparison. His mother did the math and made her decision, and we should respect it. Not guilty!

Such a sad and simplistic worldview applies to human beings the logic of dog rescue shelters, which are forced to cull the fruits of America’s despicable puppy mills and euthanize the least adoptable—by the millions every year.

Is this the endpoint of humanism? Was it for this that the Renaissance glorified the human race and pushed forward the boundaries of science? Was this grim, puny image of man what motivated our Founders to risk their “lives and sacred honor”? Did Abraham Lincoln emancipate millions of soulless pleasure and pain receptors? Did we storm the beaches of Normandy and contain the march of Communism only to make of the triumphant West a high-tech pet cemetery? Is this the best alternative we can offer to young people tempted to go off and join groups like ISIS?

We must claw our way back to a strong concept of human dignity as the basis for human rights and a free society—and to do that we need to see that suffering can have meaning, that human beings can transcend their circumstances and prevail. As Viktor Frankl documented, the men and women he knew in concentration camps resisted suicide by seeking that higher meaning, by finding something inside themselves that their tormentors couldn’t destroy. That image, that essence, of man is the source of our hope.