Supreme Sonia: Fear What She Will Do Outside of the Court, Not Inside 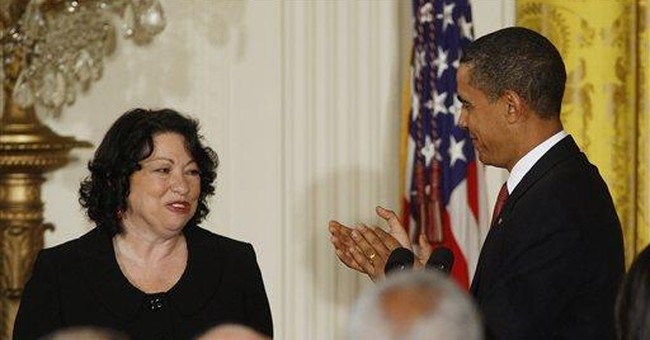 The prime focus of concern since Judge Sonia Sotomayor was nominated for the Supreme Court has been on what extent, freed from the constraint of appellate reversal of her judicial opinions, she might apply her racial and gender philosophy. Her speeches and her long record of support for ethnic activism might influence her work on the Court, secure in life tenure and answerable to no higher authority.

But her confirmation testimony suggests that she is not likely to be a persuasive influence on the eight other Justices, each of whom has strong convictions. Even swing Justices, though not tethered ideologically, are likely to prefer narrower grounds of decision than their more ideological colleagues desire.

What should really worry opponents of Judge Sotomayor are the influences she might exercise outside the court, especially on students. Her transparently mendacious disavowals of racial and gender activism outside chambers augur for more activism once she is safely ensconced as an Associate Justice. For if it is reasonable for her supporters to assume that she will continue to restrain her personal views when sitting on the Court, it is equally reasonable for opponents to assume that she will continue to agitate for her favored causes outside the court.

Yet GOP senators did the right thing in not trying to block a vote on her nomination. There is an ancient Chinese admonition about being careful for what one wishes for. Recall a pair of confirmation battles in 1993.

Bill Clinton's first two Attorney-General nominees were moderate Democrats Zoe Baird, a corporate attorney, and Judge Kimba Wood. They both went down over the first Nannygate scandals: failing to pay Social Security taxes on full-time maids they had hired. The upshot: we got Janet Reno for eight years, the ultimate nightmare who gave us (1) the Waco Massacre in 1993, which may have contributed to the Oklahoma City bombing two years later; (2) the 1995 "wall" separating law enforcement and intelligence activities–this even after the 1993 World Trade Center bombing carried out by Egyptian Islamists, a scary harbinger of the coming September 11 atrocities; (3) the 2000 snatching at gun-point of little Elian Gonzalez, frustrating the wishes of his mother, who gave her life to the Caribbean porting Elian to freedom. Reno delivered him into the clutches of his deadbeat Dad and, worse still, into the clutches of Fidel Castro, who made Elian into a Communist poster child.

Radical leftist professor Lani Guinier was Clinton's first choice to head the Justice Department's Civil Rights Division. Conservative opposition to confirmation of a Quota Queen prevailed, and Guinier withdrew to avoid the embarrassment of being voted down. The upshot? She was followed by two Quota Kings, Deval Patrick and Bill Lann Lee. Both of these appointees were very smart and highly skilled politically, and were extremely effective in promoting Team Clinton's racial quota agenda. Patrick even parlayed his stint into getting elected Governor of Massachusetts, where now he sits. Guinier, by contrast, was an ivory-tower academic with far less political savvy, who would have been far less effective.

So let us assume that somehow the GOP managed to stop Judge Sotomayor by winning just enough Democrats to their side. Who would President 44's next nominee be? One close intimate of 44 is none other than...Deval Patrick.

The Sotomayor hearings show a nominee likely to prove more Vote than Voice on the High Court. A Vote is what David Souter was, someone who sides with the liberal bloc but rarely persuades wavering colleagues or inspires law professors or students to look at the law differently; Souter lacked the power of persuasive reasoning that a Breyer on the left or Scalia on the right possesses in abundance.

Oliver Wendell Holmes once described the Supreme Court as "nine scorpions in a bottle." Efforts of Justices to sway colleagues can backfire. Sandra Day O’Connor and Anthony Kennedy became less conservative in part due to a desire to counter strong conservatives Antonin Scalia and Clarence Thomas. It is not hard to imagine that liberal Justice Stephen Breyer could decline to join far left opinions, should Sotomayor unfurl radical colors.

In her now notorious 2001 A Latina Judge’s Voice lecture at a Berkeley symposium—delivered when Sotomayor had been sitting on a federal appeals court bench for three years—she told students:

I willingly accept that we who judge must not deny the differences resulting from experience and heritage but attempt, as the Supreme Court suggests, continuously to judge when those opinions, sympathies and prejudices are appropriate.

Counseling students "to judge when their opinions, sympathies and prejudices are appropriate" is the antithesis of what mentors should be preaching. Mentors should counsel students to be aware of their "sympathies and prejudices not to indulge them "when appropriate," but to set them aside. To teach otherwise will only perpetuate racial, ethnic and gender conflict in America. This is, of course, the precise opposite of the post-racial campaign Barack Obama waged for the Presidency, which he won by getting more white votes than former President Clinton did.

The elevation of Sonia Sotomayor to the nation's highest court should signal not only ethnic progress in representation on an august institution for America's fastest-growing and largest minority population. It should signal to students that the future is theirs, if they achieve greatly, and that remaining barriers will not stop them. Instead, a passionate racialist will join the Court. When next she speaks to impressionable students after the first Monday in October, Associate Justice Sonia Sotomayor will be in a position to exercise immense tutorial influence. It is chilling to consider how students counseled "to judge when their opinions, sympathies and prejudices are appropriate" will approach their life challenges.

Judge Sotomayor is unlikely to have much success in pulling her new colleagues towards the radical left, should she so try. But she is very likely to have success in implanting in no small number of impressionable students her racial and gender obsessions. And in stark contrast to the work done by a Justice in the media spotlight of the Supreme Court, her work outside the Court often will be off radar.