John Stossel
|
Posted: May 11, 2022 12:01 AM
Share   Tweet
The opinions expressed by columnists are their own and do not necessarily represent the views of Townhall.com. 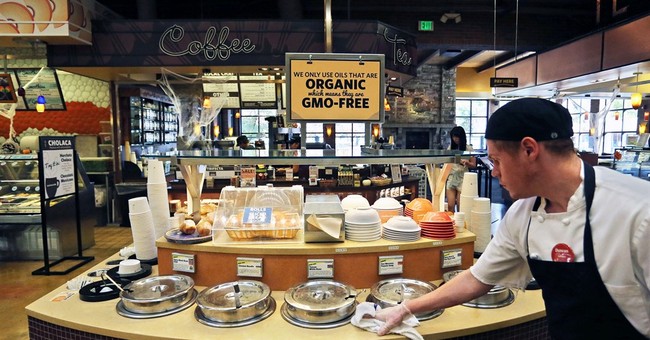 As a result, poor parents feel guilty if they can't afford to pay $7 for organic eggs.

This misinformation is spread by people like Alexis Baden-Mayer, political director of the Organic Consumers Association. She says organic food is clearly better: "The nutrition is a huge difference."

If you still want to pay more for what's called "organic," that's your right. But what's outrageous is that this group of scientifically illiterate people convinced the government to force all of us to pay more.

Congress has ruled that GMOs (genetically modified food) must be labeled. Busybodies from both parties supported the idea.

Politicians like Rep. Jim McGovern, D-Mass., said, "It doesn't cost any more. This idea that ... this ... will raise food prices is ridiculous."

It's McGovern who is ridiculous. The U.S. Department of Agriculture says the GMO labelling will cost from $598 million to $3.5 billion.

Ask people if DNA in food should be labelled, and most say yes. Yet DNA is in everything.

The idea of modifying a plant's DNA may sound creepy, but people have cross-bred plants and animals for years.

"The corn we have today, there's nothing natural about that," I say to Baden-Mayer in my new video. "What native people ate, we'd find inedible."

"You're saying indigenous corn is somehow inferior because you've seen it dried and it has tiny little kernels?" she asks.

"That's another myth of the industry," she responds. "People like you believe that."

I sure do. I also believe it's good that genetic modification lets us alter nature more precisely, gene by gene. That's better and safer than the more haphazard crossbreeding that's been done for years.

This new precision lets scientists make plants that save lives.

In poor parts of the world, half a million people per year go blind due to lack of vitamin A in their diets. Many die.

Scientists have created a new genetically modified rice that contains vitamin A. This "golden rice" could save those people.

"I've heard of golden rice," sneers Baden-Mayer. "That was a project that all of the chemical companies invested in."

I sneer right back.

"Golden rice hasn't succeeded partly because scientifically ignorant fools like you convinced the world that it's harmful!"

"I knew at a certain point you would resort to name-calling," she replies. "But it doesn't change the science on this."

Sadly, in some countries, people listen to advocates like her and believe that Americans want to poison them. One group of GMO fearful protesters invaded a golden rice field in the Philippines, ripping up all the plants.

Thousands will die or go blind, needlessly, because the organic cult spreads misinformation.

At least educated skeptics now understand that they were wrong about GMOs.

The New York Times points out that many "quietly walked back their opposition" to GMOs. "The science is clear," says a former opponent in The Wall Street Journal. "They're perfectly safe."

But the hardcore zealots will never be convinced.

Absolutely, yes. We live about 25 years longer than Americans did 100 years ago. Even compared to 10 or 20 years ago, we live longer.

But no amount of science will convince people like Baden-Mayer. "The GMO issue just has not been investigated enough," she says.