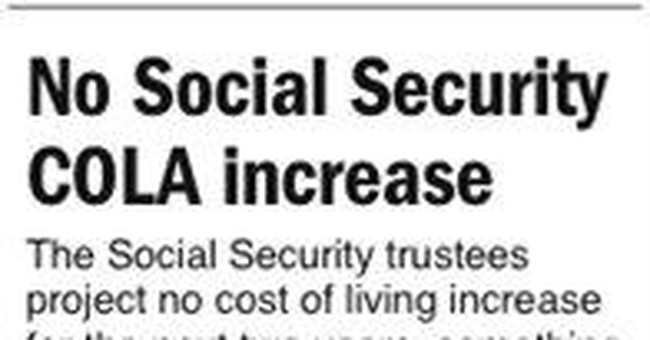 Bernie Madoff took money from people who thought he'd invested it, gave some to others who thought it was a partial return on their earlier investments and kept much for himself. That's called a Ponzi scheme, and his $50 billion fraud was called the biggest ever. But it wasn't the biggest. Social Security and Medicare are much bigger ones.

These are trillion-dollar scams. Medicare has a $36 trillion unfunded liability. Social Security's is $8 trillion. There's no money to keep those promises.

But Congress isn't investigating this scam. Congress runs it. That FICA money you thought government had saved for your retirement is gone. There's nothing left but IOUs backed by nothing. Your money was spent not only on current retirees but on wars, welfare, corporate bailouts, earmarks and all the other stuff Congress wants. For years, this was possible because the FICA tax brought in surpluses that allowed government to pay retirees more than they contributed and still help buy those other things.

Those days are gone. The huge group of baby boomers has started to retire, and that means trouble. In 2008, for the first time, Medicare paid out more than it took in.

So instead of filling the government's coffers and hiding the real size of the budget deficit, the entitlement programs have now begun to drain the treasury. Part of the "problem" is that we live longer. When Social Security started, most people didn't live to 65. Now we average 78.

This means that baby boomers like me who expect to collect Social Security and Medicare are basically stealing from children.

Think of the burden: When I was a kid, there were five workers for every retired person. Now, there are only three. And soon there will only be two young workers to fund each baby boomer's Social Security and Medicare checks.

When I explore this alarming matter on my Fox Business New show tomorrow night, Veronique de Rugy, an economist at the Mercatus Center, will point out that Social and Medicare right now consume almost half the federal budget. In coming years, if nothing changes, they will swallow nearly the whole thing. But since Congress will want to spend money on all the other things it now buys -- not to mention a new medical entitlement -- the government will either have to raise taxes to stratospheric heights, borrow like crazy or inflate the dollar. Whichever it chooses, we'll have serious problems.

Higher taxes are not a good solution because taxation suppresses economic activity by transferring capital to politicians. Yet our only hope is a sustained economic boom.

As Rep. Paul Ryan, R-Wis., points out: "You literally cannot tax your way out of this problem. It's not mathematically possible. ... You wipe out the middle class."

Well, how about borrowing? That might mean raising interest rates, which, again, would depress economic activity. Even then, lenders such as China may soon be too nervous to lend Uncle Sam more money. Moody's recently announced it might downgrade America's credit rating.

The most likely outcome is that the Fed will print more money, inflating the currency, so that the creditors are paid with less-valuable dollars. Our purchasing power will disappear.

The architects of the welfare state sure have left us a big mess. Yet hardly anyone talks about entitlements, except to add new ones.

De Rugy asks: Why can't people take care of their own retirement by investing the money government now takes? Had we done this all along, the looming problem would have been averted. Instead, "We're about to witness the biggest, most massive transfer of wealth from the relatively young and poor people of society to the relatively old and wealthy people in society."

Our forefathers would be appalled. After the American Revolution, when the new government was debating how to pay its bills, George Washington said this about a national debt: "We should avoid ungenerously throwing upon posterity ... the burden we ourselves ought to bear." Well, we sure are dumping my generation's debt onto posterity. I wish we had more politicians like George Washington.