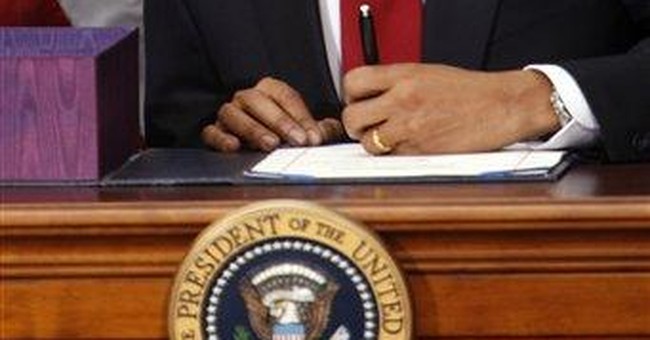 So President Obama got his stimulus bill. For a mere $787 billion, he has pledged to "save or create" 3.5 million jobs. That's only $224,857 and change per job! (If I still have my job next year, will he take credit for saving it?)

But wait. Only 3.5 million jobs? Why so few? It's not like creating jobs is difficult.

Egypt built more than 100 pyramids beginning sometime in the third millennium B.C. to house the corpses of the pharaohs and their significant others. Think of all the jobs that project created. I'll bet the unemployment rate was something any pharaoh could have proudly campaigned for reelection on -- if he faced election, that is. Pyramid building is one heck of a public-works project.

Its economic significance was not lost on that great advocate of full employment through public works, John Maynard Keynes. The British economist, so in vogue today, famously wrote in "The General Theory" (1936), "Pyramid-building, earthquakes, even wars may serve to increase wealth".

In fact, pyramids are even better than the usual government project. Keynes said: "Two pyramids . . . are twice as good as one; but not so two railways from London to York."

Ancient Egypt's success has many applications today. We could have full employment overnight if the government simply outlawed machines. Today's 7 percent unemployment rate would vanish.

Again, we find an endorsement in Keynes's "General Theory": "'To dig holes in the ground,' paid for out of savings, will increase, not only employment, but the real national dividend of useful goods and services".

Exhibit B is Franklin Delano Roosevelt. I don't mean his public-works projects, like the Civilian Conservation Corps. I'm talking about his most serious job-creating operation: the draft.

In September 1940, Roosevelt signed the Selective Act, which ordered all males 21-35 to register for military service. "Of the 16 million persons who served in the armed forces at some time during the war, 10 million were conscripted, and many of those who volunteered did so only to avoid the draft ... " writes Robert Higgs in "Depression, War and Cold War."

The draft marked the beginning of the end to the double-digit unemployment that had plagued America for a decade. Two years earlier, Roosevelt's treasury secretary, Henry Morgenthau, lamented, "[A]fter eight years of this Administration we have just as much unemployment as when we started". The draft was the answer they had sought all that time.

Instead of iPods, great art, cures for diseases and machines that replace back-breaking work, we get the equivalent of digging holes and filling them up.

Under President Obama's "stimulus" plan, jobs will be created to weatherize buildings, construct schools and wind turbines, and repair roads and bridges. But outside the market process, there is no way to know whether those are better uses of scarce capital than whatever would have been produced had it been left in the private economy.

Since government services are paid for through the compulsion of taxes, they have no market price. But without market prices, we have no way of knowing the importance that free people would place on those services versus other things they want.

So although we'll see the government putting people to work and even some new schools and bridges, we won't be able to calculate how much wealth we've lost because scarce resources were misallocated by the politicians.

Nevertheless, we can be sure we will have lost. If the government's projects were truly worthwhile, they would be undertaken by private efforts, and in their quest for profits, entrepreneurs would handle them more efficiently.

Remember this when President Obama begins to boast about how successful his stimulus plan is.