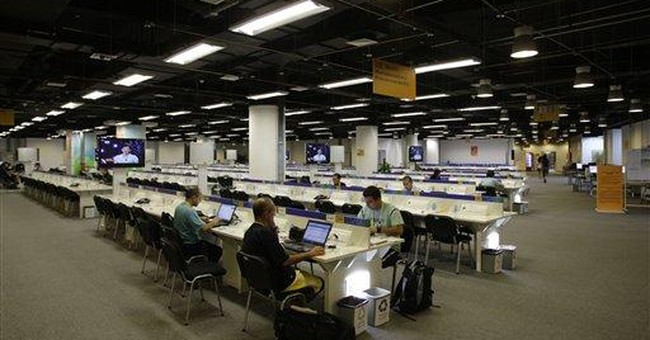 Editors' Note: On Thursday, July 31, 2008, John Stossel participated with a live chat with his readers to commemorate Milton Friedman Day, sponsored by Townhall.com and the Young America's Foundation.

Townhall: Welcome to Townhall.com. Thanks for joining us today.

We are pleased to welcome John Stossel, co-Anchor of ABC’s 20/20 and Milton Friedman Lecturer for the Young America's Foundation.

Townhall: Today is Milton Friedman Day. Friedman, who would have been 96 today, was regarded as one of the world's most powerful and influential promoters of freedom. He argued that the voluntary choices of individuals, not the dictates of the state, should be the default mode of human life; government is justified only insofar as it preserves, protects and defends people's liberty. His revolutionary work in economic theory earned him the Nobel Prize in 1976.

This chat is just one of more than fifty events in 42 states honoring the life and legacy of Dr. Milton Friedman.

Our guest today, John Stossel, champions the power of free markets and individual freedom through his ABC broadcasts and campus lectures through Young America's Foundation.

John Stossel: It's a pleasure to be a part of this chat today to honor Milton Friedman, one of my heroes. Thanks to YAF & Townhall for making this happen.

Townhall: Thank you for joining us. Let's jump to the questions.

Townhall: Recently there has been a bit of a controversy over the naming of the Friedman Institute at the University of Chicago. Have you been following that?

John Stossel: I read the NY times article. Not sure that's accurate -it's the New York Times after all. Assuming it was accurate it just shows some people despise capitalism despite its astounding contributions.

robodisc_108450: Hello. How can we best share Milton Friedman's ideas with young people?

John Stossel: I wish I had a better answer - my best attempt is to put them on 20/20 whenever I can. I’ve also persuaded 20/20 to offer some of these free to teachers through stossel in the classroom. YAF helps arrange for me to spread his ideas by speaking to college campuses. And any other suggestions are most welcome. Milton Friedman’s ideas do more to help poor people than a million community organizers.

williamv_0989087: In your opinion, what role should the government play in regulating the economy and why?

John Stossel: None. Milton Friedman taught me that. Government should enforce rule of law: punish cheaters & those who directly hurt others. Otherwise, government should butt out.

JohnH_5467897: John, I admire the way you clearly communicate your fact-based positions. Would you please run for office so I could vote for you?

Ryan_295616: Mr. Stossel, Do you have any advice for aspiring free-market intellectuals seeking to make a career in a leftist, and often belligerent, social atmosphere?

John Stossel: Milton always inspired me by remaining cheerful. I'm less successful at that. I think we all need to try harder to speak and write clearly and refine the arguments in modern terms.

Robert_295621: What was your initial response when you heard that the government is going to bail out Fannie Mae and Freddie Mac?

John Stossel: Horror. Gordon Crovitz in the WSJ has written persuasively about how Fannie & Freddie should be closed and the assets sold off - the tax payer shouldn't be on the hook.

Townhall: A lot of participants have asked which 20/20 episode has caused the most controversy. Any particular one come to mind?

John Stossel: Probably Stupid in America - my program about public schools criticizing both the teacher unions and calling public schools an evil government monopoly angered a lot of people.

Townhall: A question on Friedman...

Patrick_293384: What was it like to interview Milton Friedman? How did you first come to know him?

John Stossel: I came to libertarianism late in life. I truly read his work only 20 years ago. When I interviewed him he was quite old and sick but even at 96 he was more articulate than any other Nobel Prize winning economist that I have ever tried to interview.

LaurenV_8972343: Mr. Stossel, you eschew the label “conservative”. Where do you part ways with traditional conservatives?"

John Stossel: I don't want government to police the bedroom. I agree with Milton Friedman that the drug war is a mistake - he compared it to free speech regulation - just as government should have no say in what comes out of the mouths of adults, they shouldn't tell them what goes in.

John Stossel: I am also skeptical about America having troops in 130 countries.

Moderator: Clearly the Internet and more recently the blogs have had an impact on the media. How has it impacted your work?

John Stossel: It has shrunk my audience but it's a good thing, because people have more choices. And it's a good thing for me because now my peers in the mainstream media understand that there are different opinions.

Dr. Manhattan_295580: Mr. Stossel. What do you think about the fact that Congress will still take its recess regardless of the fact that the energy issue needs to be resolved as quickly as possible? What would you think of President Bush calling an emergency session of Congress, getting all of those butts back in their seats and getting this issue tackled once and for all?

John Stossel: I say the more Congress is in recess, the better off we are. Congress is more likely to make energy policy worse than better.

DrBruno_7804: Mr. Stossel, why has the global warming hoax become something accepted by much of society?

John Stossel: The alarmists are better talkers. They make a persuasive case to non-scientists - and people like to be alarmed. It also fits the natural bias against industrial production.

rcuster_92838: Which of Milton Friedman's books do you recommend the most and why?

John Stossel: I recommend Free to Choose because it's simple enough that even TV reporters can understand it.

Wayne: The thing I love about you is how you dispel “conventional wisdom." Could you give us an example of something widely accepted that needs debunking?

John Stossel: Second hand smoke is deadly - it's not. Studies claiming that it was were done on people who lived with smokers and spent years breathing smoke in homes and cars - the harms to passerby’s is minimal to none. Most everyone believe pesticides and wide spread use of chemicals has created a cancer epidemic. There is no cancer epidemic. Cancer rates are flat or down.

NYTimeser: You mocked the New York Times earlier. What papers DO you recommend?

Townhall: Or blogs or magazines?

John Stossel: I recommend the New York Times, WSJ, Washington Post, New York Sun, the Washington Times, Forbes, Reason, Weekly Standard, and New Republic. I find by reading a lot it's easier to sort the truth from the garbage. I also LOVE Townhall.com.

John Stossel: The current system is disgusting. The fair tax may be better because it's simpler but a sales tax that high will invite cheating & manipulation as well.

Townhall: I'm sure you've seen all the new report regarding Exxon's record profits. ChristineF emails asking “when did making a profit become a bad thing?""

John Stossel: Beats me. I wish the oil executives would stand up to the reporters and say, "Why are you so economically illiterate? You should want us to make more profits so we can go find more oil."

Castanza_0842: Growing up, who were your heroes? For example, did you admire Roger Cronkite or Dan Rather, etc.?

John Stossel: Actually it's Walter Cronkite. I didn't watch TV news and they certainly weren't my role models. I acquired all my role models later in life & they are classical liberals, not TV anchors.

Townhall: An emailer asks “what conventional wisdom will you be challenging this coming season?"

John Stossel: My next JOHN STOSSEL SPECIAL will be about government. It will air shortly before the election. I will investigate the conceit that politicians are a combination of Mother Teresa & Santa Claus.

John Stossel: Talk about it. It's outrageous that a government monopoly is responsible for educating most American kids. Milton Freidman & the fall of the Soviet Union showed that government monopolies don't do anything well. Perhaps when parents see that the kids down the street attend a school, like a KIP/charter where school is open to 5pm & kids can call their teachers in the evenings, then parents will wake up to the truth that choice provides better alternatives.

Townhall: We have time for two more questions...

Abi_295516: who do you currently look up to as leaders on economic policy?

John Stossel: I love the daily emails I get from Don Bodreaux, who's the George Mason University head of economics department. Tyler Cowen & Russ Roberts, also at GMU, I look up to. As well as many smart people at Cato, Reason, Heritage, Heartland, etc ...

Townhall: A emailed question is our last...

Townhall: Which ONE government agency would you choose to axe if you were given that power?

Townhall: That concludes our chat today with John Stossel. Thank you John for joining us today. Thanks to the Young America’s Foundation for sponsoring the event and thanks to all of you for you insightful questions.

Townhall: Thank you for helping us honor Milton Freidman. Those interested in booking John Stossel to speak on a college or high school campus or to learn more about Milton Friedman day should visit Young America's Foundation's website at www.yaf.org.