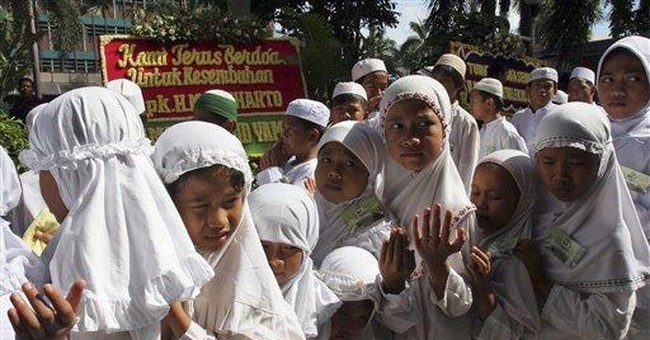 Do you want to rescue an abandoned child and give him a loving home?

That's not exactly what the bureaucrats said, but it's close. The State Department says the Guatemalan adoption system "unduly enriches" so-called baby brokers and that "Guatemala has not established the required central authority to oversee intercountry adoption."

"Central authority"? This from our government? They sound like Soviet apparatchiks.

Last December, the U.S. consul even butted his way into the Guatemalan Congress to make sure a sweeping new adoption law was up to American standards. The law is designed to put those profit-making brokers out of business by making adoption a government monopoly. But to thousands of kids awaiting adoption, a government monopoly could be a death sentence.

Yes, there have been horror stories about adoption fraud. Some children were stolen from families. This is horrible, but far from the norm. Out of more than 100 cases of alleged "baby stealing," only five were confirmed as true, says Guatemalan journalist Marta Yolanda Diaz-Duran. That's five crimes versus about 4,000 legal adoptions from Guatemala in 2006 alone. Guatemala has been the second leading source of adopted children coming to America -- after China and ahead of Russia. The adoption-broker system -- which relied on entrepreneurs providing a service for a fee -- worked well enough that Guatemala was an adoption success story.

American adoption agencies (charging a fee) worked with Guatemalan adoption brokers (also charging a fee) to match willing couples with the right children. There was a near-perfect safeguard against baby stealing: two rounds of DNA tests to prove the biological mother gave consent.

The process wasn't cheap -- parents paid $25,000 or more, and brokers who spent months or years jumping though the bureaucratic hoops -- made, horrors, profit! Hence our State Department's outrage about adoptions that "unduly enrich." The sentiment was captured perfectly by a UNICEF representative who huffed to The New York Times that adoption "has become a business instead of a social service."

Oh, yes, everyone loves "social service." But when adoption was a government-run social service in Guatemala, the results were disastrous.

I happened to be in Guatemala City last month visiting the Americas' most free-market university, Universidad Francisco Marroquin. UFM's president took me to visit Ines Ayau, a nun who runs an orphanage that was formerly in the hands of the government. The children are well cared for now, but before her church took over, Ayau said, the government staff had forced some children into prostitution. The orphanage itself was rat-infested and without electricity, and the government used the facility to funnel money to cronies. "Thirty-six persons were working, (but) 105 were on the payroll,"

Yet U.S. officials want adoption back in the hands of government?!

There's little reason to expect the current government to do much better. Guatemala is one of the more corrupt nations in the world, 111th out of 179 countries, says Transparency International.

Even if the new bureaucracy isn't corrupt, there's little chance it will process adoptions as quickly as the brokers did because without profit, it has no incentive to move the kids through the cumbersome adoption process. When other countries have put adoption in government hands, adoptions slowed or stopped. Paraguay went from sending more than 400 kids to the U.S. in 1996 to sending zero in 2006.

It may make some people uncomfortable that a middleman charges $5,000 to arrange an adoption, but profit isn't evil.

Someone has to be compensated for arranging the DNA tests and leading hopeful parents past the government's obstacles. The orphanages need funds. If some Americans are willing to pay even $50,000 to adopt, that's not a bad thing. NGOs, politicians and bureaucrats may call it disgusting "human trafficking," but I call it finding love for children who desperately need it.

Guatemala has followed America's lead, and now thousands of abandoned Guatemalan kids face spending their childhood in orphanages. Many could have found a home in the U.S. if only government -- American and Guatemalan -- had stayed out of the way.