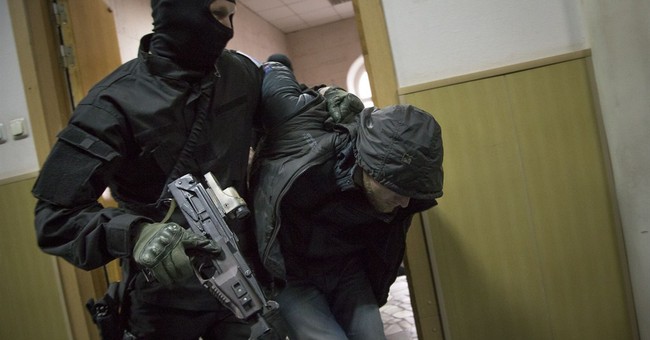 The signs that Russian president Vladimir Putin was toppled in a coup are multiplying. The U.K.’s Daily Mail reported that a key Putin ally believes that while Putin is likely alive that he has been detained by the security services after key Chechen – and Muslim-- allies were implicated in the assassination of opposition leader Boris Nemtsov on February 27th.

“I think that Putin is neutralised at the moment, but of course, he is alive,” said [Geydar] Dzhemal, seen as a Kremlin loyalist. “He is under the control of the power-wielding agencies, who have, in my opinion, organised a coup d'etat.”

Dzhemal is the head of the national Islamic Committee, and connected to Chechen leader Ramzan Kadyrov a Muslim whose security service is thought to be behind the assassination of Nemtsov—at least that’s the public explanation of the assassination.

(Note: Putin reemerged to the public today, which could signal that negotiations between two sides in an attempted coup have resolved the crisis for now.)

Anzor Gubashev and Zaur Dadayev were arrested on March 6th in connection with Nemtsov’s murder, and Dadayev, a key Chechen commander, has confessed to the murder, although he publicly retracted the confession in the newspaper Moskovsky Komsomolets.

And whether guilty or innocent, it doesn’t take a Kremlinologist to understand that when allies of Putin are publicly tied to the Nemtsov assassination by security services supposedly loyal to the president, that the loyalty is likely fictional by then.

There is no way that a Putin in command at the Kremlin would have allowed an ally to be implicated publicly-- on trumped up charges or on real ones. Less circumstantial evidence also points to at least some type of leadership crisis in Moscow.

There is information that Russia has recalled its military attaches and select security officers from embassies around the world. There are also reports of travel restrictions in Russia. Plus rumors continue to make the rounds of the murder of Putin's top security chief. This is reminiscent of similar leadership crisis from the Soviet days.

From our intel at NightWatch:

Russian President Putin has not been seen in public since 5 March. Various Russian media have aired video imagery of Putin since then, but reliable international news services have proven beyond doubt that the imagery was taken in advance for later broadcast. In at least once instance,

Attachés of several types reportedly have been recalled to Moscow from embassies around the world. Russian officials have provided no explanation for Putin's ten day absence.

Several sources opined that Putin has been ousted. If that were the case and the leadership issue were settled, the winning group would have made an announcement. No group has claimed it overthrew or assassinated the Russian leader.

Multiple sources proposed that Putin was ill. His personal spokesman denied those allegations.

While still speculative as to the fate of Putin, these point to a leadership crisis in Russia indisputably.

Given the fact that the documentary just shown in Russia has Putin saying he considered a nuclear alert in the Crimea, I think, while speculative, it also makes the prima facie case for the Kremlin on Putin's ouster.

However out friends at NightWatch don't necessarily agree:

The behavior of Russian government agencies indicates that a leadership crisis is occurring, but has not been settled. The absence of a highest level military alert and of a closure of international airports indicates that a leadership change has not occurred. Restrictions on popular movement, increased security measures at international points of entry and a force-wide nuclear alert were the key indicators of an attempt to overthrow Gorbachev in August 1990.

Speculation about his fate has mounted after Putin disappeared from view 10 days ago, causing a sensation across the media in Russia and the West. His disappearance follows the March 1st demonstration by opposition leaders in front of the Kremlin that was attended by 20,000-50,000 people.

“Prominent critics of Russian president Vladimir Putin have increased their security arrangements amid reports that a ‘hit list’ of opposition figures is circulating in Russian security services circles,” reported the Times of London on Saturday.

The hit list was first made public in the Russian journal Novaya Gazzetta.

The charge of a hit list and the public demonstration both show that the key to solving the Ukraine conflict is in the Kremlin, not in Kiev or Donetsk-- just as I wrote at the beginning of the month.

Nemtsov was the leading critic on the Ukraine gambit, and was poised to release a report in opposition to Putin’s Ukraine adventures.

The demonstration also revealed a major miscalculation that Putin and his allies may have made if they in fact arranged the killing of Nemtsov.

While ordinary Russians have largely shrugged off sanctions from the West, Kremlin leaders seem to be fearful of the domestic political reaction caused by the killing. However much Moscow resembles the Soviet-style Kremlin of bygone days, the fact is that leaders there can’t tightly control the media and communications as they had in the Soviet Union.

While Russia is not a democracy in the sense we would understand it, the Kremlin knows that it governs only if the people allow it to.

Or at least I hope so. In the absence of any clear foreign policy objectives from the Obama administration it's the best we can hope for in the crisis.

Note: Putin reemerged to the public today, which could signal that negotiations between two sides in Moscow have resolved the crisis for now.