Oppostion Marches in Moscow; Bullets for the Ukraine 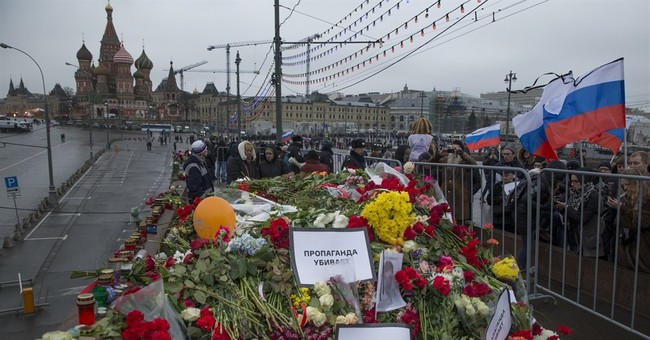 The suspicion is that Nemtsov, who was planning a rally in Moscow against Putin and the prosecution of the Ukraine war, was killed to silence an inconvenient critic.

“Tens of thousands of Russians marched through central Moscow on Sunday, carrying banners declaring ‘I am not afraid’ and chanting ‘Russia without Putin’ in memory of murdered Kremlin critic Boris Nemtsov,” reports Reuters.

While not impressive numbers like the movements that created the Arab Spring, it shows that there is an organized opposition alive in Moscow.

It's an opposition that the US should take advantage of by strengthening sanctions on Russia and by providing the Ukrainian government with the arms necessary to create a protracted morass in Ukraine that keeps Russia bogged down.

The longer that Russia remains bogged down in Ukraine, the less likely it is they could be in venturesome elsewhere. And it will give cheer to those opposition leaders in Moscow, who until the assassination of Nemtsov have had so little to cheer about.

Nemtsov, who was 55, was one of the leading lights of a divided opposition struggling to revive its fortunes, three years after mass rallies against Putin failed to prevent him returning to the presidency after four years as prime minister.

With an athletic build and characteristic mop of curly hair, Nemtsov had been a face of the opposition for years, along with anti-corruption blogger Alexei Navalny and former prime minister Mikhail Kasyanov, though no one figure has succeeded in uniting the ranks of opposition-minded Muscovites.

The opposition has little support outside big cities and Putin has now been Russia's dominant leader since 2000, when ailing President Boris Yeltsin chose him as his successor, a role Nemtsov had once been destined to play.

For relatively low cost, the United States can ensure that Russia remains what it has been since the 1970s: a two bit power with nuclear weapons.

It would also serve to have a salutary effect for those nations thinking that they can appeal to arms when solving grievances with their neighbors.

“Nemtsov, a fighter against corruption who said he feared Putin may want him dead,” concluded Reuters, “had hoped to start the opposition's revival with a march he had been planning for Sunday against Putin's economic policies and Russia's role in east Ukraine.”

The key to the Ukraine conflict in fact does not lie in Ukraine but rather has always been in the hands of the Kremlin.

There is no graceful way for Putin to end the war in Ukraine without losing face entirely.

His regime will either live or die with the way the war goes.

We only have to have the courage to supply the bullets.