The Danger of Maxine Waters Running the Banks is Real 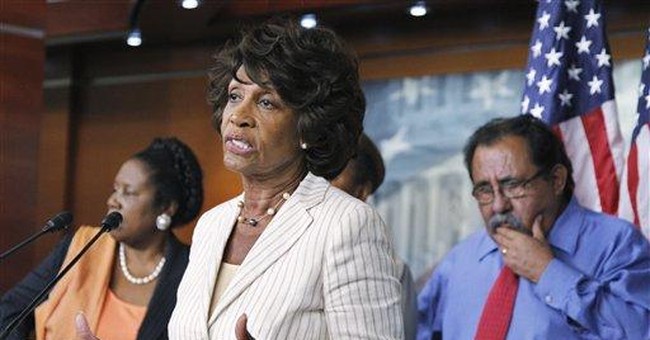 Inflation has been tame in the U.S. during the Obama administration, at least in regards to things the government is worried about, like wages.

If one looks at the official CPI measurements, inflation isn’t a problem. Deflation however could be, according to the Fed’s Politburo of Governors.

Falling prices, which presumably would give the rest of us relief at the checkout counter, if it wouldn’t do anything to add to our paycheck, is the biggest danger to the safety of our Republic, say central bankers.

“The Consumer Price Index… decreased 0.1 percent in October on a seasonally adjusted basis, the U.S. Bureau of Labor Statistics reported today. Over the last 12 months, the all items index increased 1.0 percent before seasonal adjustment.”

That puts inflation just between one and none for the year.

But the system of measurement that the government uses is geared to only record inflationary pressures in areas the government would like to control, like how much your paycheck and my paycheck is growing.

For the Fed, the ultimate sin of the economy is rising wages. When wages start to go up, look out. That’s when the Fed will start to hike interest rates to “cool” things off.

If you look at the way inflation was calculated prior to either the “reforms” in calculating CPI made by the government in 1990 or 1980, says the economic site ShadowStats, inflation is running near 5 percent or 9 percent respectively.

That rate includes the things that matter to you and me like food, energy, rents and clothes.

You know? The little things in life.

And those rates are quite unsettling considering how anemic our economy is.

I would say that anything above 10 percent inflation as calculated using the “prior to 1980” formula is likely a strain on the economy. The strain could cause—likely would cause-- the country to eventually go into a recessionary spiral no matter how low our wages remain or how anemic economic velocity is here at home.

The chart above tends to confirm that there was some link between spiking inflationary pressures and the financial crash of 2008.

As I have said before, I think the culprit was rising gas prices. Others may disagree.

Certainly consumers and producers are getting some relief today by lower gas prices, but that relief could be short term as long as our government pretends that low cost energy isn’t beneficial for the country.

But here’s the part that has me a little concerned and it’s tinged with good news and bad news: The good news is that bank lending is up and it’s helping both business and consumers.

"I think what we're seeing in the U.S. is that capital ratios have improved. We're now seeing pretty robust lending," Boston Federal Reserve President Eric Rosengren told reporters on the sidelines of a conference in the United Arab Emirates on financial regulation.

Asked where U.S. bank loans were going, he replied: "It's going both to the C&I, commercial and industrial, sector - it's also going to the consumer sector. That's exactly what you'd want to get with what we're doing with monetary policy, with the banks providing lending to both the households and the firms."

The bad news is that that means that all that money that has been pumped into the system by the Federal Reserve through quantitative easing and other monetary stimulus efforts—a record amount of money now sits in accounts in the United States—will start to increase monetary velocity, meaning it will change hands more frequently.

Now imagine how bad things will get if Maxine Waters ends up running the financial services committee in the United States House of Representatives while we have an inflationary peak and the economy is in another crisis.

Today the essential element of inflation is the availability of credit, not necessarily money supply.

And Congress can put pressure on banks to loan money regardless of circumstances, income, credit or risk.

“We must ensure that reform of this complicated market is accomplished in a manner that provides opportunity to Americans on all income levels," said Waters recently about her proposal for the government to guarantee the housing market, "protects taxpayers and consumers, and brings equity and accountability to all actors within our financial system."

Note her omission of Congress when it comes to accountability.

Inflation, generally speaking, happens in a flash. Where there is no inflation, suddenly in a period of six months or so, inflation becomes a problem.

For example, from December of 1977 inflation went from a relatively mild 4 percent annualized rate to 12 percent by June 1978. And then it took until 1981 to stabilize and reverse the inflation trend.

One way of looking at it—I explain this especially for Rep. Maxine Water who WILL be the US House chair of the financial system if Dems win a majority in the House-- is to think of the money supply as fuel in a propane tank, the banking system as the hose that carries the fuel and inflation as the fire. If you suddenly expand the size of hose by loaning more money, you will add more fuel to your fire.

The mistake the government types are making has been they have been adding more fuel as a substitute for taking care for the size of the hose—the hose being the banking sector.

The private economy has a way of adapting, however, even to government policies that we have today. It wants a larger hose and will eventually get one by its own efforts. In the meantime the government has pumped the tank with more fuel under higher pressure.

When that record fuel under higher pressure meets that expanding hose, a conflagration is what we’ll get.

And it will be years in taming. Maybe decades if Maxine Waters gets her shot.