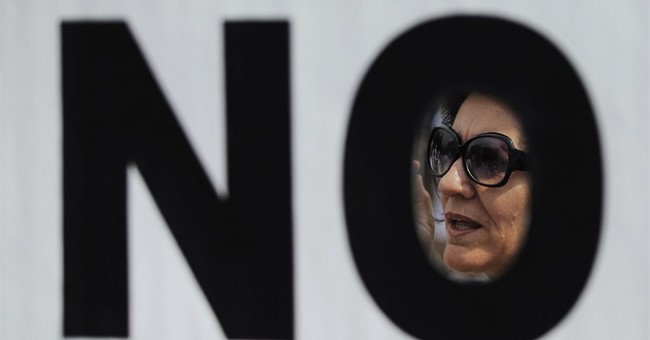 It’s not been a good few weeks for Obamacare, and thus for the American taxpayer. As doomsday draws near, with the implementation of key provisions of Obamacare, even stalwart Obama allies in the labor movement are pulling alarm bells.

That can’t be good for anyone.

So, let just put it this way: Obamacare is about to cost you more money than even the crooked accounting they did in the first place would admit of.

Labor leaders, including Jimmy Hoffa, sent a highly publicized letter in July to Senate Emperor Harry Reid and House Jester Nancy Pelosi this summer warning “Right now, unless you and the Obama Administration enact an equitable fix, the ACA [Obamacare] will shatter not only our hard-earned health benefits, but destroy the foundation of the 40 hour work week that is the backbone of the American middle class.”

While many conservative commentators focused on the “40 hour work week” to suggest unions had broken with Obama on Obamacare, that was just a red herring.

The key phrase was “equitable fix.”

So as a part of the “equitable fix” for poor neglected union membership, the White House is considering offering Obamacare subsidies to union members in an attempt to buy back their love, according Forbes’ Avik Roy, a Senior Fellow at the Manhattan Institute for Policy Research.

“Now, according to a report from InsideHealthPolicy,” writes Roy, “the Obama administration is considering offering insurance subsidies—intended for the uninsured—to labor union members who already have employer-sponsored coverage.”

Roy estimates that the proposal, if enacted, would cover about 20 million union members and cost about $50 billion per year, even though their health insurance is already covered under an existing employer-sponsored plan mandated by the government.

The interest on $50 billion per year could build a few, nice, big casinos in Havana, Cuba too.

Bada bing! The labor movement is back!

You know? For informational purposes.

I’m sure no one from either the White House or the labor unions have actually considered that... yet.

I’m guessing that they have “outside consultants” to manage such things as casino construction loans anyway.

The biggest issue that Roy raises, however, is how such an “equitable fix” might be done: legislatively or through regulation?

“I would say that it’s inconceivable that the White House would seek to impose such a ‘fix’ to Obamacare without the consent of Congress,” writes Roy. “But, given the other changes that the administration has made to the health law—of similarly questionable legality—we can’t rule anything out.”

So not really inconceivable per se, just maybe kind of illegal.

With Democrats and unions?

I say it’s a near certainty that Obama will at least float the idea of bypassing Congress.

Because if a red line exists beyond which a key Obama constituency can’t move, Obama doesn’t recognize it.

If Syrian president Bashar Assad were really smart, he’d quickly unionize all Syrian citizens and enroll them in Obamacare.

With only 21 million citizens and likely only about 10 million households, Syria’s portion of Obamacare would only add another $25 billion to the USA's deficit.

And Obama, I'm sure, thinks you’re that chump.