The Civil War Rages in Public in Egypt; and in the United States Behind Closed Doors 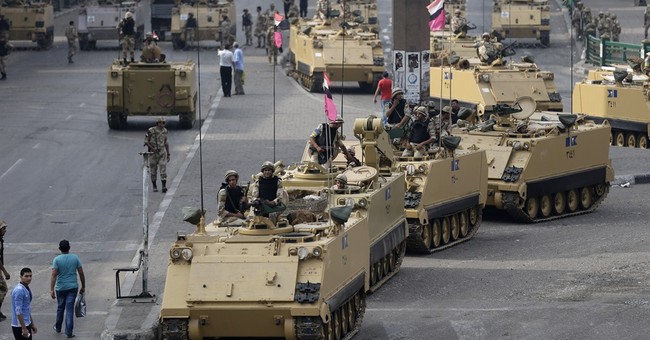 There are many things for which on principle we should stand.

As long-time readers know, I’m keenly sensitive to oil price movements, believing that high oil prices, more than any other single factor, were responsible for the systemic failure of the financial industry worldwide in 2008.

I have often argued, thanks to the work of the our contributors at Political Calculations, that high gas prices result in layoffs in the private workforce, something we can ill afford right now.

In general, my strongest indictment of the Obama administration is the abandonment of the common sense and common policy that gives us cheap, plentiful energy. That policy makes for a robust economy in the United States.

That policy used to be something that we could all agree on regardless of party.

Oil prices will continue to rise as Egypt continues to be rocked by violence in wake of the coup the Egyptian military staged against the duly elected government run by the Muslim Brotherhood.

But I agree with Abraham Lincoln that there are things some things more important than economic hardship.

Lincoln, as he prepared to take the presidential oath of office, was confronted by a delegation from New York insisting that he yield to “the just demands of the South” in order to protect the commercial interests of the nation, and avoid a costly civil war. “It is for you, sir, to say whether the whole nation shall be plunged into bankruptcy,” declared a member of the delegation to Lincoln, “whether the grass shall grow in the streets of our commercial cities.”

Defending the constitutionally-elected government of countries, and respecting the rule of law, are a noble goals for U.S. foreign policy; goals that sometimes call for sacrifices.

However Egypt, under the Muslim Brotherhood, deserves neither defense nor respect.

Democracy is a myth in Egypt, whether manipulated by the Muslim Brothers or the Egyptian army. But in general I believe that the army better protects the aspirations of ordinary Egyptians than do the religious zealots Obama favors in Libya, Egypt, Syria and elsewhere.

As our own NightWatch analyst noted last Christmas, the vast majority of Egyptians boycotted the elections process when Egypt approved a new Islamist constitution:

The informal results show that just fewer than 5.5 million people made the decision for 82 million Egyptians that Egypt will be a more devout Islamist state, governed by Sharia. They overwhelmingly abandoned the last 60 years of Egyptian political history and US involvement in Egypt.

With such a low voter turnout, the referendum can hardly be considered an accurate measure of what Egyptians want. By far the vast majority of Egyptian voters voted for no change by boycotting the referendum.

Today Barack Obama’s foreign policy is in tatters, shredded by willful blindness with which the president views-- or rather disregards—history, especially the history of regions where he has a keen personal interest.

Foreign policy for a great American nation, he should know, is not made on the slights, animosities and centuries-old grudges that Obama seems to trade on like money.

It’s much bigger than that.

Within our government today there are deep divisions about the abandonment of decades-old alliances in the Middle East, which, in stark contrast with today, kept the peace.

This is true of Egypt.

The U.S. military has such a deep and complex connection to the Egyptian military that it would take the suspension of reality to believe that military leaders in Egypt don’t consult with contacts in the Pentagon, receiving both material and moral support from them.

When the final chapter is written in the Obama presidency, and the memoir wars begin, I expect that the civil wars raging in the Middle East will be paralleled by revelations of shadow wars within the defense-intelligence community at home that is mostly at odds with Obama policy, especially on Egypt.

Certainly a president is entitled to enact his own foreign policy. But disregard for the chain of command, while not worthy of our country, is a natural outgrowth of Obama’s own disrespect for our constitution and the rule of law here at home.

I’m glad that someone is willing to stand up to the shifts and evasions of a president who believes his own pseudo, Greek-column majesty outpaces that of a nation built on the daily hard work and sacrifice of so many.

We are entitled to protest in this event; and let oil prices go where they may.