One of the fatal miscalculations that has plagued the Obama administration is their complete, total and utter misunderstanding on how energy prices affect the economy.

Our friends over at Political Calculations have done a great job trying to explain this to the White House for the past year.

In fact, Political Calculations top-of-the-page feature “Good Morning White House Staffer”- which shows the relationship between gas prices going over $3.50 per gallon and new unemployment claims going up- is a must see.

The feature takes gas price and unemployment data from 1976 to the present and allows you to predict the unemployment rate two years from now when gas prices go to a level that you input.

For example, if gas prices go to $4.15 on average, two years from now, says the PC tool, unemployment will be at 10 percent.

While other economists have been caught flatfooted two years in a row on unemployment and the rapid slowdown of GDP, PC has called it in advance, leaving Townhall readers better informed than most top traders on Wall Street.

This is in part due to their excellent work on the relationship between gas prices and the economy. 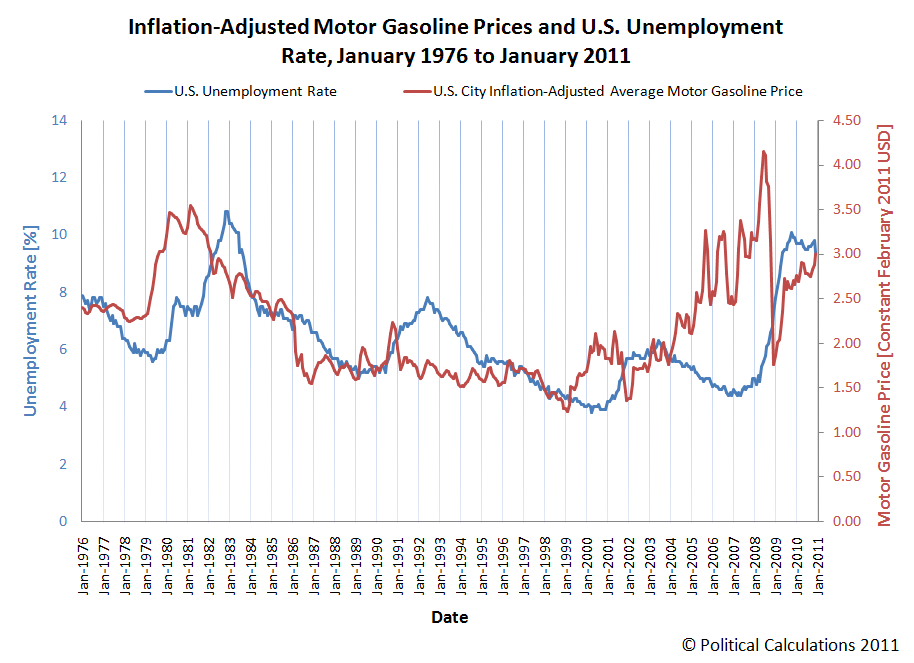 While gas prices are going down right now as you read this, Political Calculation is advising you to “keep your resume up to date,” and suggesting to residents of our federal city “that this summer will perhaps present the best opportunity you will have to sell your metropolitan Washington D.C. home before that real estate market changes.”

In part this is because the Obama administration has failed on two fronts energy-wise. And these failures have tended to accelerate the upward spike in gas prices, in contravention of a decades-long federal energy policy that seeks to ensure that energy remains both cheap and reliable.

There are good, strategic reasons for the U.S. to be involved in the Middle East and those reasons don’t include a love for sand. They do include making sure the U.S. has access to reliable sources of …cheap oil.

Despite rhetoric to the contrary, the administration has not followed an “all of the above energy policy.” The administration’s well-known war on fossil fuels- you know, the fuels that make up the bulk of energy that we use?- is too familiar to all of us to warrant a rehash here.

Suffice to say that whatever credibility Obama sought on energy has been wasted on: 1) Obstructing projects that would create real jobs and real energy and; 2) Spending money on “energy” projects that create neither energy nor jobs.

The result has been that energy prices have been volatile, making it difficult for businesses to plan or hire long-term.

But even more important than the supply-side contraction that Obama’s policies have meant for traditional and reliable sources of energy are the monetary policies that have helped push the price of oil up despite world GDP slowing substantially in 2011 from a projected rate of 4.5 percent to under 4 percent.

Revisions so far for 2012 has the Conference Board predicting that “Global growth is projected to grow at 3.5 percent in 2012, then accelerate somewhat to 3.6 percent from 2013-2016, and then show a further slowdown to 2.7 percent from 2017-2025. At 3 percent, on average, global growth will still be somewhat higher than the period 1980-1995 but between half and a full percentage point below the growth rate from 1995-2008.” Advanced economies they say will grow by “1.3 percent in 2012. For 2013-2016, the outlook suggests some recovery in advanced economies, bringing these countries back to the pre-recession growth trend of a little more than 2 percent.”

But don’t expect the anemic growth rates to give us anything other than temporary relief from high energy prices.

Because our world bankers are demanding more dollars to keep the inflation gravy train going. If you can’t grow out of a financial hole, you can at least inflate out of it. If the federal government was giving me interest-free loans right now, like they are the world’s banks, I’d probably be buying a barrel or two of oil with that money too, just as they are.

Twice in the last year we have seen monetary policies pump extra dollars into the financial markets with the result being that energy prices have gone up so rapidly that any apparent growth in the economy can only be attributed to inflation. And then as we see, once oil prices reach a certain level, the economy comes falling back to earth.

This Dollars-to-Oil cycle, more than many other things, is responsible for the low-growth, no-job, so-called recovery we are stuck in today.

It’s the plague of Obama. And until it stops feeding on the rest of us, the economy just won’t grow.

P.S. From my friend Senator Shawn Mitchell via Facebook: "What kind of person names his dog after himself? Seriously."