Liberals wants you to know that America's best days are almost behind her.

They even pegged a date. And included pictures.

The date is 2016, says the mainstream media.

That's the date when they say that the IMF warns China's economy will surpass America's in real terms.

The IMF disputes the claim. 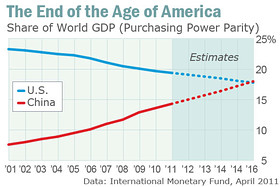 There are a number of problems with this projection as the "End of America."

Firstly, in actual dollars the U.S. will still have a substantial advantage in GDP in 2016 according to the IMF.

"An analyst at the IMF said in a statement," reports CNN, that "much hinges on whether economic size is measured by purchasing power parity -- what your money can actually buy on the ground in any given economy, the basis of the famous 'Big Mac' index -- or GDP at market rates -- which is measured by converting the national currency into a common currency (normally the U.S. dollar) and measuring how much is flowing through the economy."

But you can't compare economies by using purchasing power parity. Instead, the correct figure to use is the dollar-to-GDP figure, according to the IMF.

“The IMF considers that GDP in purchase-power-parity (PPP) terms is not the most appropriate measure for comparing the relative size of countries to the global economy, because PPP price levels are influenced by nontraded services, which are more relevant domestically than globally,” said an IMF spokesperson according to the Financial Times.

For example, you can't count rents as equal in China and the U.S., which PPP would most certianly do. You get a lot more with rent here than you do in China in the most simplistic example.

Also, projections about economic growth are notably tricky. A lot of assumptions go into coming up with a PPP or a GDP dollar number that likely won't pan out.

But most importantly people seem to be mesmerized by the sheer size of China, but discount the difficulties in controlling a command economy enjoying as much growth as China has sustained.

As we have written about on this site in the past, there is a tremendous amount of malinvestment in China. Whole cities have been built that stand empty. That kind of investment can't go on forever.

In the general upward slurge of growth a country can paper over a lot of problems. They just can't do it forever.

In fact authorities in China may have started the biggest crackdown on dissent in over ten years.

“Shenzhen officials seeking social stability before they host the Summer Universiade, an international sporting event for university students,” reports the China Reform Monitor “have arrested or evicted more than 80,000 people deemed a threat to security.”


Corruption, lack of freedoms, central planners, human rights problems and- oh by the way- being Communists- all present problems to China in becoming the biggest economy in the history of the world, ever!

Reformers, led by Premier Wen Jiabao are in the minority in China; a big minority.

"It is obvious [Wen] is the symbol and the voice of the reforming forces ... The fact that he appears helpless is a very good reflection of China's political reality," said Professor Joseph Cheng Yu-shek. "You have people in the party who might be interested in reforms but they are certainly in the minority and can't do much."

But eventually that park closes down.

And America's freedom to innovate then takes over.

Certainly long-term, China has the potential to be the biggest player, but it will be some time before that happens, if it happens at all.

In the meantime, I suggest that we take seriously a rapprochement with Russia, while imposing stiffer restrictions on trade with China, pending serious reforms in her government and economy.

Oh...and get rid of that guy Obama.