John P. Warren
|
Posted: Apr 03, 2017 10:59 AM
Share   Tweet
The opinions expressed by columnists are their own and do not necessarily represent the views of Townhall.com. 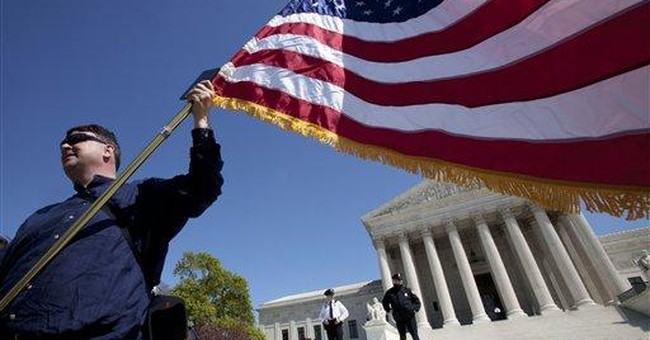 Another upside-down federal mandate means that veterans who have fought for freedom in the world’s most desolate places return home to many taxpayer-supported colleges and universities where their First Amendment rights have ceased to exist, and may not use their benefits at institutions where they thrive.

How veterans may use their benefits is part of a larger picture of federal overreach. Pew's "Federal and State Funding of Higher Education" study reveals that where once state funding of colleges and universities far exceeded that from federal sources, the federal government now supplies (as of academic year 2013) over $75 billion dollars to the states’ total of about $72 billion. According to Pew, “About half of the U.S Department of Education’s budget is devoted to higher education (excluding loan programs).” Also in 2013, feds provided $103 billion in student loans, while, “States, by contrast, provided only $840 million in loans that year, less than 1 percent of the federal amount.”

While the states primarily support general operations of public institutions, Uncle Sam provides assistance at public and private schools in the form of student Pell grants, research grants, and benefits to others. The latter category includes $12.2 billion in federal veterans’ educational benefits, and therein lies the rub.

Veterans may only attend colleges and universities that accept federal funding. They can attend schools like Rutgers, which denied Condi Rice the right to speak in May 2014; they can go to DePaul and Berkeley, which kept Milo Yiannopoulos from speaking in May 2016, and February 2017, respectively; they can go to all the schools that silenced Ben Shapiro throughout 2016; veterans can attend NYU, which prevented Gavin McInnes from appearing in February 2017. And Kellogg Community College—which also accepts federal money—would welcome veterans even though authorities there arrested students for handing out copies of the U.S. Constitution. And then, there’s Middlebury College, which forced the eminent Charles Murray from campus in March 2017. Middlebury gladly accepts federal funding, too, but appears to care little for the rights of those attending there.

Campus cries against the evils of war and environmental pollution have been honored traditions for as long as most of us can remember. Vilifying and bullying those with disfavored political or religious views by students and faculty alike are something else. It is organized fascism funded by the American taxpayer.

Veterans can, of course, attend places like Hillsdale College and Grove City College—both of which retain their independence from federal government largesse and control by refusing federal funds of any kind—but they may not use their hard-earned federal veterans’ educational benefits at these schools, institutions where their First Amendment rights continue to be honored and respected. As of 2016, in fact, neither Grove City nor Hillsdale was listed on the Obama Department of Education’s fabled “College Scorecard,” for ostensible reasons too lame to legitimize here.

The ongoing hypocrisy comes into sharp focus when we must endure the selective piety progressives employ regarding so-called Sanctuary campuses for illegal immigrants and the whole LGBTQ imbroglio. According to a recent Inside Higher Ed piece advocating limited cooperation with federal immigration officials, the University of Illinois at Urbana-Champaign and Oberlin College in Ohio, to name two, sought administration guarantees to preclude release of student immigration status to federal officials. Jessica Vaughan, an executive at the Center for Immigration Studies—a group seeking limits on immigration—cut through the noise this way: “…universities…get a lot of money from the federal government, and if they are obstructing federal law, then they should not have access to federal funding potentially.”

In a Huffington Post piece, the writer piously outs schools like George Fox University for seeking waivers to Title IX so that they may deal with matters like sexual orientation and marriage in ways they religiously choose. The writer states, unequivocally, “With federal funding come federal laws,” and elsewhere, “But receiving federal funding implies a responsibility to meet federal laws.”

A recent Trump tweet wondered whether schools not protecting students’ freedoms should receive federal funding. Indeed, funding fascism can never have been an intended use of American taxpayer dollars. The swamp, everyone should understand, is not just about corporate interests and lobbyists amok; it is also about bureaucrats and rules that hamstring the constitutional guarantees to all our people.

Slashing federal grant dollars for schools that allow fascistic faculty and students to trammel the rights of others will be met with noisy resistance, no doubt. But in memory of those who gave all to ensure the Constitution’s birth, and for those women and men in uniform who serve us now, can we not let them use their benefits at schools they choose where freedom still rings?