Vote Fraud and the Big Lie

John P. Warren
|
Posted: Sep 28, 2016 9:22 AM
Share   Tweet
The opinions expressed by columnists are their own and do not necessarily represent the views of Townhall.com. 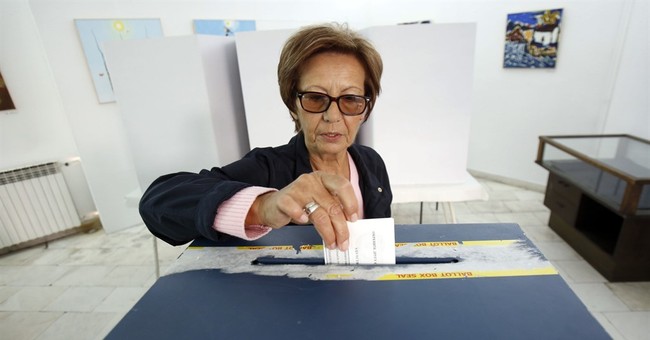 Whether Trump or Clinton won their first bout, pundits will debate. What’s not debatable is the big lie once again perpetrated by a favorite liberal lapdog, The New York Times. In a recent “Guest View” piece appearing in, of all places, The Sharon Herald, and other State Media organs to be sure, the NYT shilled: “The truth is that those who created the specter of voter fraud don’t care about the integrity of the voting system; they want to undermine the rights of legitimate voters because it helps them win elections.”

The opening was true Saul Alinsky: accuse the other side of doing what you’re doing by repeating the same lie over and over. It’s about the Democrats’ campaign to suppress Voter ID laws, all in the name of minority rights, but the truth may be murkier and more dangerous than anyone has yet imagined out loud.

So, let’s talk truth about voter fraud. The Heritage Foundation laid out nine separate kinds of voter fraud in its 2014 pamphlet, “Does Your Vote Count?” Consider these: impersonation at the polls, false registrations, duplicate voting, fraudulent use of absentee ballots, vote-buying, illegal “assistance” at the polls, ineligible voting, altering the vote count, and ballot petition fraud. In its 2008 decision in Crawford v Marion County Election Board, 553 U.S. 181,195, the U.S. Supreme Court “said that ‘flagrant examples’ of voter fraud ‘have been documented throughout this Nation’s history by respected historians and journalists.”

According to Heritage, citing a 2012 Pew study of 24 million registrations reviewed, over 12% were out of date, inaccurate, or duplicates. Moreover, 2.8 million people were registered in two or more states, and 1.8 million voters were dead. When actual vote fraud has been discovered, relatively minuscule numbers of votes were affected, and usually in local elections for sheriff, school board, city council, etc. Of course, there were the three advocacy organization workers who pleaded guilty to illegally registering and voting in the 2008 presidential election in Ohio. In 2011, a member of the Tunica County NAACP Executive Committee was convicted of voting in ten different names, four of which were names of deceased voters. Then there was vote buying in Kentucky in 2010, fraudulent absentee ballots in Florida in 2012, and another Ohio singleton in 2012, casting multiple ballots.

There’s no shortage of shenanigans at the polls, and while there are instances of fraud, not one is known to have affected a senatorial, gubernatorial, or presidential election. That isn’t to say, however, legions still believe there’s a van in the bottom of Lake Michigan with many thousands of Nixon votes never counted in 1960.

None of that negates the need for Voter ID laws. Quite the contrary. Americans consistently support Voter ID requirements by substantial margins, “no matter their race, ethnicity, socioeconomic status or party affiliation,” according to Heritage. In fact, studies have shown that percentages of voter participation have increased in Georgia amongst Latinos, and Black populations were much higher (than even White voters) after Photo ID requirements were implemented between the 2004 and 2008 elections. Increases in minority participation were also higher with Voter ID in Indiana and Tennessee in the 2012 election, to cite two more examples. So, if anything, Republicans pushing such laws should take full credit for more fully enfranchising minority voters by raising their confidence levels in the integrity of the process.

This is where the big lie becomes truly sinister. In denying the existence of vote fraud, the NYT conspicuously fails to mention massive electronic vote fraud, which is as undeniable a likelihood as Vladimir Putin reading Hillary Clinton’s emails. Like the illusionist, Democrats direct our attention to one part of the stage while the magical mischief takes place in another.

The liberals’ convenient fiction might have endured but for an unrelated series of events. One set involved foreign state actors hacking DOD secrets, likely siphoning Hillary Clinton email server secrets, stealing bankcard identities, and appropriating the life histories of over 20 million government employees, to name a few. Realistic portrayals of vote theft in entertainment pieces like Scandal and in (my own novel) Turnover, have convinced viewers/readers of the real probability of massive vote theft.

What finally shined a blinding light on the dark part of the stage, however, was an unsurprising discovery by the Commonwealth of Virginia. “During a recent election,” the Virginia Information Technology Agency reported in its 2015 audit, “one precinct reported unusual activity with some of the devices used to capture votes.” In a tightly controlled test, VITA proved, “the vote data could be remotely modified” by a “malicious third party.” Bingo!

What does this mean for the 2016 election? Is Trump right? Is the election riggable?

I’ve never seen Scandal, but the plot of 2014’s Turnover is simple: a sitting VP arranges for a friendly government contractor to audit the 2012 election returns to ensure vote integrity. Using actual Florida county vote tallies from the 2000 POTUS election, techies demonstrate to the VP how with simple electronic interfaces via the right government connections, votes could have been shaved or added without trace, thus giving Gore a clear majority over Bush with no threat of recount. Such “audits” of only a few battleground states would be necessary. Bribery and murder by desperate, ambitious politicos round out the story.

Earlier this year, for the first time, Secretary Jeh Johnson acknowledged the real possibility of massive electronic vote fraud via cyber attack. In the news September 27, 2016, it was reported that 18 states have asked DHS to help them ensure election integrity. Getting chills yet?

In an administration that already thumbed the scales of justice on behalf of Hillary Clinton, possibly to further a certain downstream SCOTUS nomination, is it possible some special government unit will thumb the scale once again on November 8th to secure it?