John P. Warren
|
Posted: Aug 29, 2016 12:01 AM
Share   Tweet
The opinions expressed by columnists are their own and do not necessarily represent the views of Townhall.com. 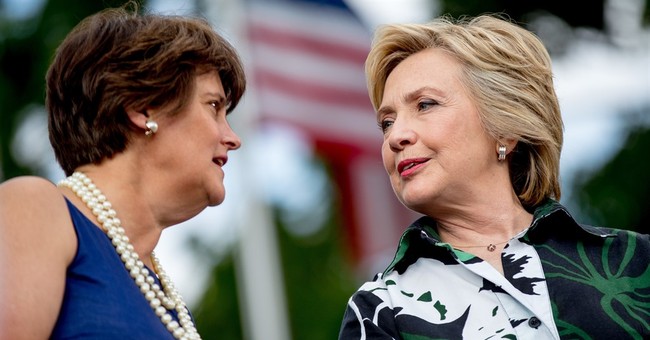 A recent cartoon by Catalino sums it up nicely: There’s a car pile up behind a sad sack of a driver who says to the officer: “My intention wasn’t to run a right light and kill someone.” The officer says, “Okay, you can go.”

Another artist adds an exclamation point. Former NSA employee and current international fugitive, Edward Snowden, says: “So you’re telling me I could have put everything on a private server and run for president?”

As biting humor often does, it gets to a larger truth that goes beyond the here and now of the 2016 election. As one friend asked the other day: “What do you suppose the longer term effect of a Hillary presidency will be?”

Baby-boomers and the generation or two immediately thereafter may have been the last to go through public or private elementary and high schools where teaching about character, responsibility, and accountability were part of a daily diet of morality tales. A ruler across the knuckles was not all that unusual for those who lipped off to anyone in authority. For every transgression—if you were caught—you expected to pay a price, and once home, the penalty was often more severe. “Hell to pay” became a cliché for a reason. Rules were rules.

The men and women we regarded as our heroes back then were, to be sure, human and culpable, but we didn’t often know it, unless, of course, our world turned upside down upon learning that Superman—George Reeves—took his own life. We did not live in a Facebook fishbowl and didn’t know how lucky we were. Even as late as 1984 when Democrats chose Geraldine Ferraro for VP, we may have argued about politics, but respected her even when Democrats lost in the Reagan landslide. Ferraro was a classy candidate thirty years ago and remained a woman of esteem until the day she died.

It wasn’t until 2008 that Republicans saw fit to nominate a woman for their ticket, and despite the broad smears by the State Media crowd and Dems who can’t stand a conservative woman, Sarah Palin stood her ground, and in her own way, has earned the respect of many millions. Palin, Liddy Dole, and Carly Fiorina went into the arena, and though neither they nor Ferraro ever claimed to be pure and perfect, none of them—not one of them—dishonored us by their candidacy or insulted us with an in-your-face dishonesty Hillary Clinton has foisted upon us throughout her three decades of public life.

It’s not as if what we know about her comes only from behind-the-scenes whispers as was true about the Kennedy brothers, for example. It’s not as if anyone not living under a rock can look themselves in the mirror and say: “Whitewater? Travelgate? Foster? Benghazi? Missing Emails? Pay-to-Play? Gee, I never heard any of that stuff? You mean, she hasn’t told us the truth?” If elected, it’s not as if we won’t wonder about who sleeps in the Lincoln bedroom, who’s been pardoned, who donates to the Clinton Foundation. It’s not as if most who exist above plant or animal life won’t ask the obvious questions: “How much did it cost them?” Or, “What did they get for their money?” How much will a Supreme Court appointment be worth? Last week, the Washington Post said: “Impressions such as these are corrosive to national institutions.” Ya think?

Democrats are appealing to their base, to their own conservative wing, to Indies and disaffected Republicans. A vote for Hillary is a vote for history, they say. The history she would make is not one for which we would be proud. Those voting for her will become her enablers, her accomplices, her associates in mass-coverup, and prisoners of their own guilt when all the sorry truths eventually reveal themselves. Her election would say to those who want something for nothing, who cheat on their taxes, who lie on job application forms, who steal from their employers, who disdain security rules, who commit perjury, who destroy evidence, who swear to preserve, protect, and defend the constitution—but won’t: “No problem!” Yes, the Hillary Effect will be deep, dark, and dirty.

Because Donald Trump has yet to find his stride, Clinton stands a better than even chance to win. What then? Will the 60% who distrust her now suddenly see her cloaked in a mantle of integrity on Inauguration Day? Will women be proud that this woman became the first woman president? “This woman is the best of us.” “Grow up to be just like Hillary.” Will women really say those words to their daughters?

Although the Teflon must be wearing thin, Hillary hasn’t worried about being caught because for her, unlike David Petraeus, Edward Snowden, and others, there’s been no accountability, no penalty, no price—not even a ruler across the knuckles. Now comes Donald Trump who says to Blacks and Hispanics, “What have you got to lose?” Democrats have been lying to you for years and years, he says. You have no jobs, your houses are falling down, and you get no education. How’s that been working for you?

For Blacks and Hispanics, the appeal may be about jobs, a better life, and respect. For all of us—every single one of us—what we have to lose if Hillary Clinton becomes president are all the promises of the social compact we have with one another. We will forfeit all expectations of trust, fair dealing, and decency. It won’t be long before we lose the right to call ourselves free.