John P. Warren
|
Posted: Jul 13, 2016 11:32 AM
Share   Tweet
The opinions expressed by columnists are their own and do not necessarily represent the views of Townhall.com. 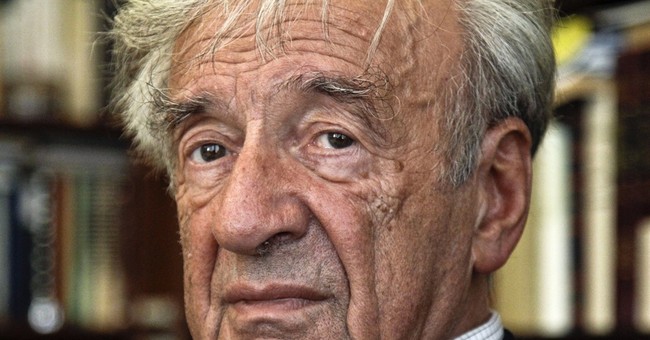 No philosopher or theologian am I, but the passing of Elie Wiesel at age 87 last week prompted me to think about where we—where we Americans—stand in the larger battle of good and evil.

In May 1944, a 15.5-year-old Jewish boy was cattle-shipped to Auschwitz with his parents and his little sister. Tattooed on his arm by the Germans that day was A-7713, a number he carried to his death over 70 years later. The years of the other Wiesels were over in mere hours when they went to the ovens.

In Night, Wiesel (Vee-Zell for purists) told of an encounter with another sojourner in the bowels of hell: “His cold eyes stared at me. At last, he said wearily: ‘I have more faith in Hitler than in anyone else. He alone has kept his promises, all his promises, to the Jewish people.’” Those were words I had read some years ago, a jagged counterpoint to the claims of Islamic extremists and Holocaust deniers everywhere. To say that Hitler’s Final Solution had not been carried out is to live in no less an alternate universe to reality than Stalin’s extermination gulags, Poland’s Katyn Forest, Pol Pot’s Killing Fields, the Sudan, 9/11, Sandy Hook, San Bernardino, Orlando, and all the other iconic atrocities of civilization. Now, Dallas. In America, in particular, the once noble goal of civil rights has become an orgy of correctness and divisive identity politics. Worse, “civil rights” has become the latest oxymoron to confound the xxxx-est nation on earth. There’s a word missing there, but I am beginning to wonder what it might become.

With evil personified seemingly ever present, it was a momentary relief when the wisdom of Mr. Wiesel became the center of Fr. Michael Allison’s homily this past Sunday. It was mostly his paraphrase of a well-known quote that insisted I listen more closely: So that no one forgets the Holocaust, or ignores the mega murders of the modern age, Wiesel has said in one way or another, “In the camps, I survived and someone else died instead of me. I must live for them.” Afterward, I found other nuances in ideas like: Having survived, I owe something to the dead, and anyone who does not remember betrays them again. Not remembering kills them twice.

While many of us might not have found ourselves in Orlando’s Pulse, a brother or a sister might have been, and any of us could have been in many other places, including Ft. Hood, Denver, or Boston—or on the streets of Dallas. That we weren’t taken to another world in any of these killing zones means we survived while others did not. In his 1986 Nobel Peace Prize speech, Wiesel said, “We must always take sides. Neutrality helps the oppressor, never the victim." For all those who have been slain in a mindless rant of violence, can any of us bear to kill them twice?

Father Allison reminded us of the great Protestant theologian, Reinhold Niebuhr, and it was he who once said, “There are historic situations in which refusal to defend the inheritance of a civilization, however imperfect, against tyranny and aggression may result in consequences even worse than war.”

Together, then, Wiesel and Niebuhr have dared us all to preserve our national, cultural inheritance because we owe it to ourselves, our children, and to all those who didn’t live to see our future.

Ronald Reagan spoke of Morning in America. Those sunlit days of economic growth, racial healing, and limitless American greatness seem to have clouded over, especially in very recent years, when everyday slaughter has scarred our eyes and deadened our souls. 2016 is a year when at the polling place we will be sorely tested. Democrats will nominate someone nearly 60% of our citizens believe should be prosecuted for criminal acts. Republicans will nominate someone so many find offensive.

To my friends who think leftward, I say: I understand you’re committed to your party, to your notion of social justice, to your dream of a woman president, but now that Bernie has his socialist planks on which to stand while selling out to the Clinton establishment, will your conscience allow you to choose a reckless perjurer and a crook?

To dear conservative friends, I say: I understand that Trump shares little of your principles. You’re right: he is to you a mere Republican populist, and a lout at that. Yet, will your cherished principles permit you to stand by while the Clinton-Sanders duet drags our beloved country toward a socialist twilight, the result of which may be another Wiesel Night?

To workaday Republicans and Indies: We owe Trump nothing. He owes us. If he wants to lead us, we must demand he do so representing all the best of our instincts for decency, respect, and civil behavior. Our nominee must inspire us to preserve our cultural inheritance and an ordered civilization of unrigged justice. If a degrading socialism is evil, can we avoid taking sides? As a friend of mine put it so well recently, “So, it’s either a crook or a lout? God, I hate it but we’ll have to take the lout.”

Honoring the men of Dallas and all the others with ceremonies and heart-choked words are not enough. Wiesel warned that those who were silent to yesterday’s assaults will remain silent tomorrow. The opposite of love, he said, is not hate. It is indifference. And indifference to the bleeding, numberless heroes who died for us to survive is, he concluded, “the epitome of evil.” Like those brave men in Dallas, we need to run toward the rumbles of national peril, not away from them.