Johnny Kampis
|
Posted: Apr 02, 2019 10:15 AM
Share   Tweet
The opinions expressed by columnists are their own and do not necessarily represent the views of Townhall.com. 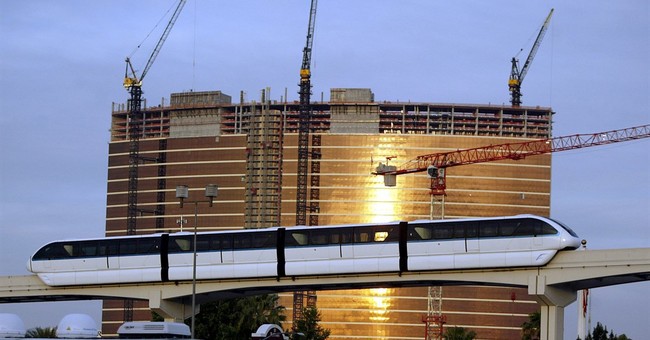 An expansion of the taxpayer-financed boondoggle that is the Las Vegas Monorail won’t be ready in time for the 2020 NFL season when the Raiders are expected to begin play in the Las Vegas Stadium.

City planners want to extend the monorail from its current southernmost stop at MGM Grand about one and a quarter miles down to Mandalay Bay, allowing patrons easy walking distance to the new stadium at the corner or Russell Road and Interstate 15. The project is expected to cost about $24 million.

Las Vegas Monorail Co. has yet to break ground on the project as it waits for the county to review its permit applications. Since the extension is expected to take 18 months to complete it’s very unlikely it will be ready by the start of the NFL season in September 2020.

Jeremy Aguero, an analyst at the firm Applied Analysis, told the Las Vegas Review Journal it’s difficult to say what impact the delay will have on the overall stadium project, which is expected to cost $1.9 billion that includes $750 million in taxpayer money from an increased lodging tax.

“It’s impossible to tell at this point,” he said. “The transportation plan hasn’t been developed, so the extent to what the monorail plays into that plan would be difficult to ascertain at this point in the process.”

The Nevada Department of Transportation has estimated infrastructure improvements around the stadium site will cost at least $200 million, and the Clark County Commission approved setting aside $4.5 million annually of room tax money as a backup source of funding for an extension of the Las Vegas Monorail to Mandalay Bay to serve stadium foot traffic. Las Vegas Monorail Co. is attempting to secure private financing for the expansion.

As Taxpayers Protection Alliance previously reported, the monorail has so far been a financial boondoggle. Initially costing more than $650 million – or nearly $150 million per mile – ridership numbers for the light rail that runs from SLS casino to MGM Grand have been far below expectation – about 14,000 per day compared to lofty goals of 55,000. The past four years’ financial statements show total losses during that period of more than $75 million.

Complicating things further, the Las Vegas Convention and Visitors Authority has suggested that Elon Musk’s The Boring Company be given a contract to build a two-mile loop beneath the convention center. While the initial project will only provide service under the 200-acre footprint of the convention center, official documents include a proposed expansion by The Boring Company of underground tunnels to service areas as far north as Fremont Street and south to the airport. That could put the tunnel in direct competition with the monorail if it ever came to fruition.

Ingrid Reisman, senior vice president of the Las Vegas Monorail Company, told Ars Technica that “as this project is specific to the Las Vegas Convention Center campus, we don’t anticipate it will impact our current operations and does not affect our expansion plans."

Parking at the 65,000-seat stadium has also been an issue, with organizers scrambling to find available spaces near the location. The Clark County Commission approved a plan by the Raiders that includes four satellite parking locations.

Officials at MGM-Mirage are concerned that its customers will be “choked out” by football fans taking over its lots on game days. MGM-Mirage owns the three casinos closest to the stadium – Mandalay Bay, Luxor and Excalibur, each with its own parking decks for customers.

Michael Schaus, communications director for the Nevada Policy Research Institute, told Taxpayers Protection Alliance that the selection of the stadium site was a head-scratcher due to the logistics of getting 65,000 people into that location. He also predicted the stadium project would “serve as an excuse for local authorities to green-light more publicly-funded projects surrounding the venture.”

“We've already seen this with regard to the ever-financially troubled monorail, and we're likely to see even more as the city bends over backwards to make sure the Raiders have what they need to accommodate their fans,” he said.