John Nantz
|
Posted: Feb 25, 2017 12:01 AM
Share   Tweet
The opinions expressed by columnists are their own and do not necessarily represent the views of Townhall.com. 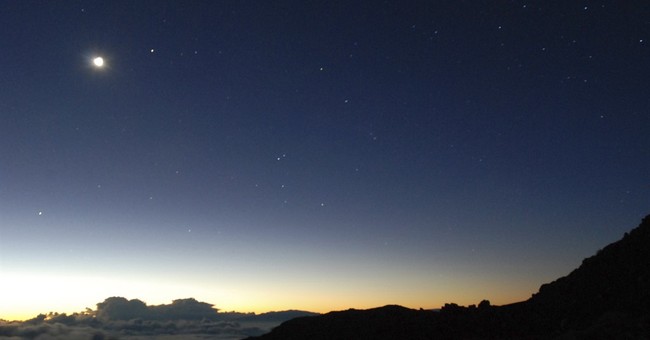 We've come a long way from Ward and June Cleaver, featured in the iconic 50's television show titled Leave It to Beaver. Some might say that the chasm between Ward Cleaver and the modern man has been spanned by a masterpiece of social engineering. But experience teaches that the modern family has experienced a precipitous plummet into the craggy depths of feminist disinformation, leaving masculinity a twisted, battered, broken corpse. Suzanne Venker's new book The Alpha Female's Guide To Men And Marriage is a profound and powerful refutation of all that feminism claims about how women should relate to and view men as husbands, fathers, and lovers.

Somehow, Venker has gained access to the shadowy realm of the male psyche, usually only exposed within the hallowed confines of official man-meetings. Few females have been successful in sussing out the obvious fact, as Suzanne says in beautifully crafted economy, "men are simple, not stupid." Feminism espouses a reductionist view of this paradigm and states flatly that men are stupid. Sample any modern sitcom and it becomes evident that the left's view of masculinity describes a bumbling but well meaning fool who owes any success in life to a domineering wife, who guides even the most mundane decisions.

But, Suzanne describes a relationship in which the wife relinquishes the urge to lead and allows a natural dynamic to prevail. Of course, for the feminist this is an heretical statement, having spent decades goading women into the role of the self-assertive alpha. This is the sociological equivalent of attempting to fit a square peg into a round hole and has shackled women to an archetype that is inimical to the happiness of the family and to themselves.

In Venker's tightly crafted book, she reveals an empowering simplicity. Following the "men are simple" paradigm, Venker identifies those aspects of the marital relationship that men regard as essential. Venker says that what men want the most is respect, companionship, and sex. Essentially, when these three needs are met, men respond naturally by working to please their mate. Additionally, women possess the power of the feminine which works in subtle ways to create an atmosphere in which men are naturally drawn to healthy conclusions. Venker likens this dynamic to the chessboard wherein the King and Queen move in very different but in mutually beneficial ways.

Far from cold, calculating manipulation, the power of the feminine is a compliment to the traditional male leadership role within the family dynamic. It can mold a relationship into a symbiotic harmony that creates the most value for both partners. Venker told Townhall, "Women have the power to navigate the health of their marriage as a parallel to male headship, not as something that undermines it. By "power" to navigate it, I mean that if things aren't going well, she has the ability to turn it around by simply getting out of his way and not arguing all the time, which will make life more peaceful and easier for her (and for him) in the end. They both win in that he's doing what he should be doing and wants to do (be in charge of things) and her power only comes into play in that she's getting what she wants (to relax and be cared for!), allowing it to happen."

The great irony of feminism is that it ultimately plays to the misogynistic fantasy of sex with multiple partners without responsibility. Whenever the Divine order is altered, there are entailments that follow as a function of natural law. And, encouraging women to assume the role of the masculine results in a dissonance which is usually only resolved by divorce. As Venker has stated in a recent article, "equality doesn't work in love."

The feminist sacraments of birth control and divorce have worked to the misery of modern women and encourage their objectification as sex and marriage are desacralized. Far from liberating women, the attitude of promiscuity subjugates women since, biologically, they are disproportionately impacted by pregnancy or by the excruciating emotional and physical trauma of infanticide. Venker told Townhall that "much has been lost in our obsession with contraception." Though contraception is certainly a valuable tool within the parameters of marriage, its abuse in abetting promiscuity only serves to dissipate the feminine. The prevalence of contraception has, in some ways, facilitated the alpha personality in women but, as Venker says, as long as you "walk out of your house an alpha, but come back a beta," things generally work out in a marriage.

From a man's perspective, one of Venker's best insights recognizes that men desire the acceptance of their wives and often seek it out by discussing problems with their spouses. A husband wants to feel that his wife is on his team. Venker explains, "When your husband comes to you with a problem, he wants you to listen to him, not play devil's advocate. Telling your husband you don't agree with him is effectively telling him that his judgement is poor, and his reaction will be to retaliate." Men want to feel that their wives are in their corner as they battle through life's vicissitudes. This doesn't mean that women must always agree, but it does mean that direct opposition undermines the potential for harmony. Women are uniquely endowed with an ability to communicate their opinion without assuming the verbally combative, alpha persona. Alpha personalities are great for the boardroom but create disunity and bitterness at home.

Venker also recognizes the role of biology in the marital relationship and details the vast difference between the expectations of the sexes. Women are programmed to seek out males that possess the ability to provide a home and financial stability and tend to not be sexually attracted to males that do not provide this sense of security, at least potentially. Venker explains that this impulse is not characteristic of the prototypical "gold digger," but is a practical component of the biological impulse to produce children. What may be more obvious is the male impulse which tends to be triggered by feminine physical aspects. Venker told Townhall, "I feel VERY strongly that both partners have a duty to look their best for each other throughout the duration of a marriage and that if they both don't share this commitment the marriage will typically struggle."

Though Venker's book is a wealth of detailed information, presented in an easy to read and concise way, the overarching principle of her thought draws from a foundational Biblical truth. Marriages are most successful when husband and wife view the relationship through Christ's example of servanthood. When both partners approach the relationship thinking of what they can give, instead of what they can get, most conflicts can be resolved harmoniously. The principle of servanthood is the most developed expression of love and exists only as a function of choice regardless of ephemeral, transitory feelings. Ultimately, love is what Venker's book is about. But it's not the brand of love peddled by pop culture or the selfish monstrosity espoused by feminism. Real Christ-like love is characterized by sacrifice and any marriage composed of a man and a woman demonstrating this kind of unconditional love will weather any difficulty, standing the test of time.