There Are No Toy Guns In A Gunfight

John Nantz
|
Posted: May 03, 2016 12:01 AM
Share   Tweet
The opinions expressed by columnists are their own and do not necessarily represent the views of Townhall.com. 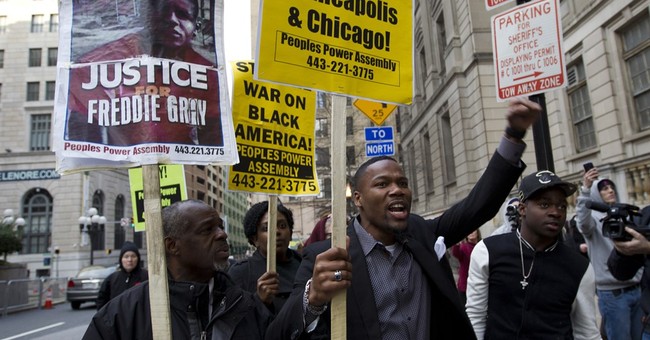 A 14-year-old black male youth was shot by police recently in Baltimore. For many, this sentence is infused with racial flammables, a veritable napalm awaiting the merest spark. For the Black Lives Matter movement and other members of the racism industry, facts are just dry kindling before the raging flame of witless emotion.

In this instance, the facts, as reported by the Baltimore Sun, involve Dedric Colvin who, on April 27th, was seen walking down a street carrying a BB pistol. Unfortunately, the BB pistol was indistinguishable from a Beretta 92 handgun. Colvin was confronted by a Baltimore City detective who identified himself and ordered Colvin to stop. Instead, he immediately fled on foot and after a brief chase, Colvin was shot. The 14-year-old received non life threatening wounds.

Most people understand that fleeing from law enforcement in the lawful execution of their duties is foolish. Indeed, the person fleeing has dramatically increased the risk both to himself and to pursuing law enforcement. This risk increases exponentially when a weapon is involved. The perpetrator sets in motion a chain of causation that links subsequent harm directly to his reckless act. The comedian Chris Rock put it in the easy diction of common sense: "Stop immediately."

Colvin was carrying a BB pistol that, to any reasonable person in the same or similar circumstances, appeared to be a Beretta 92 pistol. The rules governing deadly force are the same for law enforcement and for private citizens. The test is simple: would a reasonable person in the same or similar circumstances feel that they were in immediate jeopardy of death or serious bodily harm? There is no requirement, in legislation or case law, to take the time confirm if a weapon is functioning or authentic. In a gun fight, split seconds can mean the difference between life and death. The test is based on perceptions and on how a reasonable person would react based on those perceptions. In the spirit of equality before the law, race is in no wise a factor in the legal calculus of deadly force. It's the realization of Martin Luther King, Jr.'s dream of Justice blind to pigmentation.

The Baltimore Sun took pains to point out that the shooting took place on the one-year anniversary of the Freddie Gray riots. Although this fact may be of historical interest, it bears no relation to the events resulting in Colvin's injuries. However, the Baltimore Sun's juxtaposition of these two unrelated events highlights the predatory nature of race based politics.

The Baltimore Sun, in its disgusting attempt to pander and incite, makes the failings of a mother and the suffering of a misguided young man a cheap trade in salacious race propaganda. Freddie Gray died last year in police custody. Six Baltimore police officers have been charged, three of which were black officers and three of which were white. In the spirit of race politics, it should be noted that Gray's death occurred during the mayoral tenure of a black female, the hyphenated Stephanie Rawlings-Blake. She's a graduate of Oberlin College and a Democrat. Rawlings-Blake has the odious distinction of reigning over one of the most violent periods of Baltimore's history, with 360 homicides recorded in the past twelve months. Yet, the Black Lives Matter movement has agitated in Baltimore on the basis of alleged racial injustices. It would seem that the task masters that the racism industry rails against are those of their own making.

Nine people were the victims of murder the same week during which Colvin was shot. These lives are treated as a mere footnote and are only referred to tangentially. Unfortunately, for the bigots and agitators of the Democrat inspired racism industry, these murders serve no political purpose--none of the nine were shot by law enforcement.

Democrats are only interested in fixing an iron collar around the throats of a duped constituency, who are too easily distracted by demagoguing a convenient scapegoat. Power is their only real objective and the means, however unsavory, justifies that end. You have only to look to the tragic failures of their own policies, the social justice laboratories of New York, Detroit, Chicago, Los Angeles, and Baltimore. The toadies of the Democratic Party, Black Lives Matter operatives, create the fiction of law enforcement oppression to ensure the continued flow of money into Democrat coffers at the expense of the black community. In the meantime, Baltimore law enforcement officers continue to do the job they are sworn to do, answering the desperate calls for help from members of the Baltimore community who are unable to defend themselves.