Indicting Christ With the Atrocities of Islam 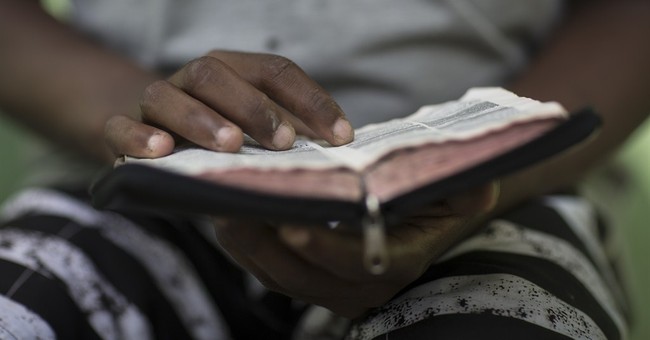 Liberals are very fond of trying to conflate the teachings of the Bible with those of the Quran. It is an attempt to destroy the foundations of our liberty by indicting Christianity with the atrocities of Islam. For liberals, violence is only religious if it impunes Christians. The Bible is a threat to liberal, leftist dogma because it is truth that diametrically opposes the humanist statism that is the utopia of the American left. Atrocities committed by Islamists are met with only nervous smiles or with blathering inanities about jobs for ISIS because Islam is not an American institution to be dismantled. Liberals rush to smear all of Christendom with the ancient history of the Inquisition because Christian doctrine opposes their deification of the state. And, dredging up the corpse of the Crusades is intellectual so long as it bashes the faith of countless Christians.

The Church of Rome’s Crusades are historical fact, so is the Catholic Inquisition. History attests to acts of violence perpetrated in the name of Christendom. History has also been witness to acts of brutality and conquest perpetrated with great consistency in the name of Islam. However, Islam and the Quran embrace violence as a matter of political and religious orthodoxy; whereas, violence perpetrated in the name of Christ and His church is always a matter of heretical deviance. Moreover, Muslim violence is an organic component of the doctrines of the Quran and of the chronicled history of Muhammad contained in the cannon of the hadith, which also forms the basis of shariah law. Furthermore, Islamic notions of theocracy, a fusion of church and state, come directly from Koranic teachings. Conversely, notions of ecclesiastical independence form the state and its propensity to meddle derive from Biblical doctrines.

Whereas, the Quran is tyrannical and brutal, the Bible is the fount of liberty and is permeated with notions of grace and compassion.

Much of modern confusion and liberal political propaganda concerning the Bible stems from a profound ignorance of the structure of the Bible and the concept of covenant. In fact, the idea of covenant is so monumental to Christian doctrine that the Bible is separated into two different testaments, the Old “Covenant,” and the New “Covenant.” The Bible actually contains far more than the two covenants but the two major divisions represents God’s over arching covenant with man under the Law and then a “New Covenant,” which is not really new at all.

The Bible clearly teaches that God is the same yesterday, today, and forever (Hebrews 13:8). The New Covenant is not new in the sense of fundamentally different, but in the sense of coming to fruition or completion. Since the fall of man in Adam, the only acceptable propitiation for sin is the shedding of substitutionary blood. God instituted the system of animal sacrifice to cover the offense of sin until, in the fulness of time, God’s perfect sacrifice was made—Christ. Old Covenant believers looked forward to Christ’s sacrifice in faith, whereas, we look back in faith to Christ’s redeeming sacrifice and resurrection.

The same crimson theme that begins at the fall of mankind in the garden continues to this day. Every covenant, every page of the Bible, points to Christ. Genesis records the fall of man and of God’s planting the seed of reconciliation, while the rest of the Old Testament chronicles the developing flower of God’s salvation blooming like a lily in the New Testament record of Christ’s sinless life, sacrificial death, and redeeming resurrection.

The original covenant was made between God and Adam. So long as Adam abstained from eating of the tree of the knowledge of good and evil, God’s relationship with Adam would remain unbroken. In this, Adam sinned. The Bible records that God created covenants with individuals such as Noah and Abraham, and with a particular nation—Israel. This is the particular point where the liberal begins to twist the truth of covenant. God formed a unique relationship with the progeny of Abraham and, in time, with the nation of Israel. God provided them with instructions unique to their heritage, to their time, and to their peculiar character as God’s chosen people. The Bible also says that these things were given to succeeding generations of believers as examples “written for our admonition.” I Corinthians 10:11 But, the specific provisions of covenants with Israel were for them and for their time.

Politically and culturally, this is the critical difference between the Quran and the Bible. There are notions of covenant in the Quran but they are utterly without nuance, monolithic, and locked in time. The Quranic concept of covenant is stunted and forever bound to the primitive culture and time in which it was devised. The Israelites were instructed to utterly destroy their enemies who occupied the promised land, to kill men, women, and children; to utterly destroy cultures, even down to their livestock. However, the Bible is crystal clear for any serious reader, these commands were delivered exclusively to the descendants of Abraham and for a specific purpose, with a limited objective, and because of a distinct relationship with God, His justice, and His plan of redemption.

The Quran knows no such limitations but authorizes barbarities in perpetuity, with a universal objective, and as a primary means of propagating Muhammad’s view of a global, theocratic Islamic kingdom. The sword becomes just another means to an end in the hands of the capricious and power mad. When interpreted through the prism of the hadith, and even within the context of the Quran itself, passages such as “And wage war on all of the idolaters as they are waging war on all of you. And know that Allah is with those who keep their duty (unto Him).” Juz 10:36, and “Now when ye meet in battle those who disbelieve, then it is smiting of the necks until, when ye have routed them, then making fast of bonds…” Juz 26:4 A propensity to violence is not Quranic heresy but sanctioned orthodoxy.

Christ has something very different to say about the nature of His kingdom in this New Covenant age: “Jesus answered, My kingdom is not of this world: if my kingdom were of this world, then would my servants fight, that I should not be delivered to the Jews: but now is my kingdom not from hence.” John 18:36 Christ’s kingdom is not political, but spiritual, and the advancement of Christ’s kingdom is to be accomplished by “the foolishness of preaching.” I Corinthians 1:21. The Crusades and the inquisition were aberrations, departures from the clear teaching of Christ and were and are universally condemned by the Church. We live during the flowering of God’s redemptive plan, under the New Covenant’s outpouring of grace. Liberalism’s attempt to besmirch the doctrines of Christ with the creation of Mohammad is nothing short of grotesque blasphemy. It is the deepest calumny to fabricate a moral equivalency between two diametrically opposed theologies; the success of which depends exclusively on the ignorance and gullibility of an uneducated populace.

Christ himself pronounces the most solemn curse on those who would pervert His truth, “For I testify unto every man that heareth the words of the prophecy of this book, If any man shall add unto these things, God shall add unto him the plagues that are written in this book: And if any man shall take away from the words of the book of this prophecy, God shall take away his part out of the book of life, and out of the holy city, and from the things which are written in this book.” Revelation 22:18,19

Liberals would do well to consider where their hubris leads them.