Why We Love American Sniper 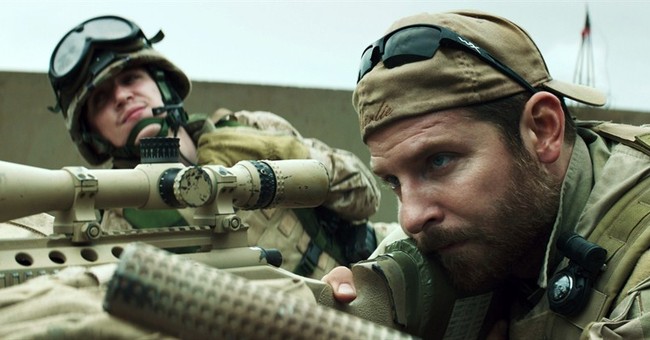 The heroic is fundamentally important to Americans. Our history is steeped in the epic and the adventurous. We are a nation born out of the crucible of the impossible and the achievements of our past were torn from the maw of oppressing titans by men whose martial skills were made perfect in their faith and breathtaking selflessness. American Sniper is another chronicle of heroism lifted from the hallowed parchments of American war history. This movie is breaking box office records because Americans instinctively recognize, love, and rightly venerate the hero and, more importantly, what made him one.


American Sniper is a movie about a U.S. Navy SEAL sniper, Chief Petty Officer Chris Kyle. The movie is also about Chris’ wife Taya and the sacrifices that military families make when their nation calls their loved ones to duty. The movie is also about something that liberals desperately want you to forget or ignore—the enemy is real and the enemy is profoundly, unequivocally evil.


Chief Kyle was an apex warrior and performed his duty heroically, we are immediately confronted in the film with the unexpected and seeming contradiction that is present in every act of battlefield valor—love. This is the magical element that produces the alchemy of the heroic. Love is the characteristic that was central to Chief Kyle’s warrior ethos. This, at the moment of decision in the valley of the shadow of death, drives warriors beyond themselves and impels them to fell deeds of Olympian character. Love is the simple element that transforms men into gods whose deeds beam for millennia from the jeweled constellations. An exaggeration? Hardly. We still know the names of Achilles, Hector, and Leonidas because their deeds were fueled by the indestructible dynamism of love for comrade, home, and hearth.

For the liberal mind, this is a Gordian knot that no amount of introspection or application of gratuitous tolerance can slip. But, the magical fires of heroism are always fed by this most ancient of all elixirs; it is written, “Greater love hath no man than this, that a man lay down his life for his friends.” John 15:3 Chief Kyle was animated in his entirety by this celestial theme.


American Sniper is an epic because it chronicles the ancient struggle between good and evil and between love and hate. Islamic terrorism is the evil of our time and men like Chris Kyle are fighting the good fight, doing the right thing. In this world, we don’t have to look far for monsters, they scuttle in their thousands across Persian sands or shamble in shadows within our glittering cities. Kyle knew this and for love of his country, of his compatriots, and for his family, he shouldered his rifle and thundered his country’s righteous vengeance; an eye for an eye and tooth for tooth. Chris Kyle bore the sword for all of us and he did not ply his trade in vain. It is not a popular sentiment, but love does not turn a blind eye to evil but, rather, seeks it out and vanquishes it. Liberal minds are averse to any notion of love that is not distorted by sentimentality since liberalism is fundamentally a political rational for license. But, the quintessence of love, God Himself, is revealed as Moses proclaimed, “The LORD is a man of war: the LORD is his name.” Exodus 15:3


What is singular about American Sniper is the recognition that love is not the permissive and amorphous absurdity that liberalism describes, but is a characteristic of the manly and battle hardened. Love acts in the face of mortal danger and impels men of character to selfless action in the prosecution of a cause in harmony with nature’s inescapable laws of justice and equity. Kyle’s love of country impelled him to take up arms in her defense. His love of comrades-in-arms inspired him to fell the enemy in staggering numbers, at mind-boggling distances, while under direct fire; doing the grizzly work of war in spite of its incalculable personal cost. And, Kyle’s love for his family drew him back from the edge of war’s tantalizing abyss.


We are constantly bombarded by the propagandists of the Left. We’re told that America is fraught with a shameful history and that our national heroes are merely the caricatures of white supremacist fiction. The bolshevik howls that America is nothing more than an imperialist monger, despoiling the weak of precious resources. But, men like Chris Kyle give the lie to such calumnies. In Kyle’s words, “We’re protecting more than just this dirt.” A ghostly cadre, rank upon rank of the most noble souls have not cast their lives, nor spent the priceless currency of life’s love upon the cause of mere conquest. The noble do not throw themselves away and it is the testimony of the peerless dead and heroic that the American cause is righteous. Kyle’s four tours in Iraq were paid in the irredeemable specie of time lost with those he counted most dear and with the full knowledge that for each Islamist beast felled in the sand, one less orc would threaten prehistoric war on Chief Kyle’s native soil.


The despicable Left feeds us the lie that our soldiers, sailors, and airmen are bloodthirsty baby killers or blundering imbeciles. But, despite the subversive harangue, we flock in the millions to movies like American Sniper to feel pride and bask in the light of this truth that we are the heirs of Jovian heroes, that we may follow where they lead if we but cultivate the same character. We may all be made superhuman if we but love more than ourselves.


God bless The Devil of Ramadi and all those who follow in his patriot path.

When It Comes to Senate Democrats, Joe Manchin Shows Why He's The Only Voice of Reason
Matt Vespa
Did Jerry Nadler Have An Accident on Live TV?
Matt Vespa