#AllLivesMatter? Not So Much 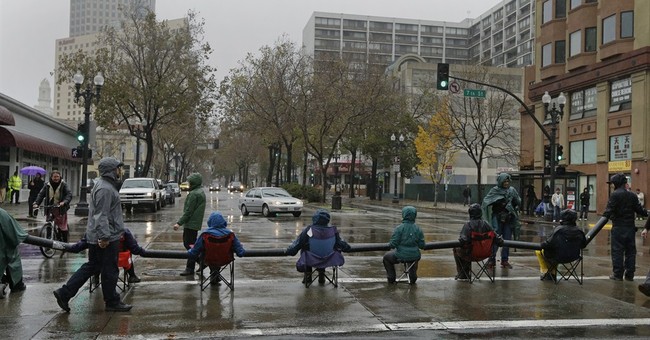 All lives don't really matter. Just ask a Hollywood star like Gwyneth Paltrow. She'll quickly remind you of your insignificance. She once quipped, "I am who I am. I can't pretend to be someone who makes $25,000 a year." And, please, don’t mistake Michelle Obama for a commoner. For her, it's an act of patent racism to fail to recognize her golden nimbus, to force her descent from Olympian divinity by asking her to grab a box of detergent from the top shelf.

Or, consider the Left's newest saint in the diabolical pantheon of race, Michael Brown. The Left has been screaming for the murder of cops ever since Brown embarked on a drug fueled rampage that culminated in his crazed attack on Officer Darren Wilson. Apparently, Wilson should have "run" or submitted meekly to Brown's murderous attack. If you wear a badge, your life has been weighed in Al Sharpton's balance and has been found wanting. And, God help you, if you're an unborn child your life is valued least of all. It's a pity that a fetus can't commit a felony, maybe then his or her life would matter--at least as political mammon.

The #AllLivesMatter hashtag is modernism. Superficiality is often defined by one hundred and forty characters or less. Only a vapid and silly people could possibly accept a fraud like Howard Zinn peddling his book like a turn of the century laudanum monger, hooking our nation's youth on the incomplete, the half-truth, or the fiction-turned-fact. A perfect piece of historic theatre ready made for the catatonic intellect of Matt Damon, who made mention of Zinn's book in the movie Good Will Hunting.

Many Americans are intellectual mouth-breathers, wandering through life with their maws open wide and ready for an Obama, Holder, or Sharpton to come along and regurgitate a half digested dogma into their eager gullets.

The ranks of the Ferguson and Garner protestors are filled with these sorts of people who swallow rancid falsehoods without a moment’s reflection, whose ontology is crystalized in a vacuous meme like, "I can't breathe," or worse, a distillation of hate and ignorance like #BlackLivesMatter. As if black lives don’t matter to law enforcement officers who daily risk their lives protecting the black community. The truth of the matter, as Rudy Giuliani so concisely put it, is that “cops do more for the black community on a daily basis than Al Sharpton ever has.” The hashtag, in the hands of liberal democrats, has become a nihilism, and hustlers like Al Sharpton drive his packed hate bus over the abyss while charging his mumbling passengers an extortionists fare for the trip.

Public education, entertainment, and political demagogues—the very real analog of H.G. Well’s beastly Morlocks—have all conspired to breed a generation or two of simple minded Eloi. “These Eloi were mere fatted cattle, which the ant-like Morlocks preserved and preyed upon—probably saw to the breeding of.” (The Time Machine) The hideous secret of the Left is that the rank and file are consumables. The rabble have only to be fed a slogan or two, things only have to sound right and make one feel rage. A simple battle cry like “hands up, don’t shoot” is trumpeted, and life becomes a cheap commodity in the faux revolution.

How a person chooses to live his or her life, the choices made at critical or mundane moments, determines its quality, defines its utility, and charts its eternal destiny.

In America, we are all equal before the law. But, that does not mean that our lives are the same. We are all ascending or descending the scale of excellence based on the choices that we make. Minute, by hour, by day we determine the quality and importance of our lives. What is uniquely American is the recognition that we all have the potential for greatness and that we are guaranteed participation in the pursuit of happiness. Successes don’t make us qualitatively better, but only quantitatively distinct. Guaranteeing outcomes only ensures that everyone participates in a serfdom. The American system is fundamentally one of self-reliance, as opposed to the Democrat’s government dependence. The Left attempts to invert the laws of nature by promising prosperity and security through the mechanisms of dependence, while creating the illusion of a viable irresponsibility.

It is a self-evident truth that responsibility is an unavoidable moral reality. That choice is real and consequential. Michael Brown made a series of critical choices that set him in opposition to Officer Darren Wilson. Brown’s choices to steal, to threaten a vulnerable man, and then to attempt to kill Officer Wilson were all patently immoral choices. In this context, Brown’s life ceased to matter as much as Officer Wilson’s.

Most people are familiar with the account in Genesis 18 concerning Sodom and Gomorrah. But, most people miss a great deal of what this passage has to teach. Quite simply, God places a much higher value on the lives of the righteous. Abraham’s nephew, Lot, took up residence in the city of Sodom, a city whose “sin is very grievous.” (v.20) God met with Abraham and revealed to him the impending destruction of the two cities. Abraham’s response was to plead for mercy, for the deliverance of the righteous: “And Abraham drew near, and said, Wilt thou also destroy the righteous with the wicked?…That be far from thee to do after this manner, to slay the righteous with the wicked: and that the righteous should be as the wicked, that be far from thee.” (vv. 23, 25) Abraham continued to plead for the cause of the righteous by asking God to spare the cities if 50 righteous men were found there. Finally, God acquiesced, “Peradventure ten shall be found there. And he said, I will not destroy it for ten’s sake. And the LORD went his way, as soon as he had left communing with Abraham…” (vv. 32, 33)

Not even ten righteous men were found in Sodom and Gomorrah. So, God’s fire and brimstone fell and the wicked were destroyed from off the face of the earth. People like Michael Brown and Eric Garner sacrifice themselves on the altar fires of liberalism. Then the false prophets descend to eulogize their anti-hero, a paean in an evil tongue that knows only lies, slogans, and half-truths. Their disciples then scatter to the cardinal points of the compass to “protest” and riot just like the men of Sodom who “compassed (Lot’s) house round, both old and young, all the people from every quarter.” (Genesis 19:4) Ultimately, our lives only matter in proportion to our obedience to the truth. And, that journey can only begin at the foot of Christ’s cross.