Where Blacks Are Slaves And Same Sex Marriage Is Legal 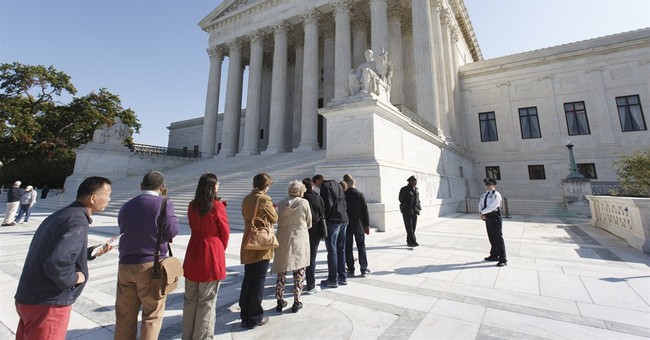 The United States Supreme Court has been profoundly wrong at many points in its not so dignified history. In fact, in 1857 the court decided that Black Americans were not citizens, merely "property," and, therefore, not fully human. Chief Justice Robert B. Taney, a Jacksonian Democrat, wrote the majority opinion in Dred Scott v. Sandford. Justice Taney foreshadowed the white robe and hooded future of the Democrat party with his cowardly and dehumanizing rationale. In the ignoble tradition of progressivism in every place and at all times, Taney cowered behind the traditions of slaveholders to support his patently unconstitutional ramblings. Chief in his arguments against recognizing "negro" citizenship was the assertion that if freed blacks were considered citizens they would possess the same rights as any other citizen, to include the right to possess and carry firearms:

"It would give to persons of the negro race, who were recognized as citizens in any one State of the Union, the right to enter every other State whenever they pleased, singly or in companies, without pass or passport, and without obstruction, to sojourn there as long as they pleased, to go where they pleased at every hour of the day or night without molestation, unless they committed some violation of law for which a white man would be punished; and it would give them the full liberty of speech in public and in private upon all subjects upon which its own citizens might speak; to hold public meetings upon political affairs, and to keep and carry arms wherever they went. And all of this would be done in the face of the subject race of the same color, both free and slaves, and inevitably producing discontent and insubordination among them, and endangering the peace and safety of the State." 60 U.S. 417 (1857)

Today's court is infected with the same intellectual toxin, progressive bigotry disguised as social and economic justice; it flounders in a mire disconnected from the English common law, the accumulated wisdom of centuries of jurisprudence. The progressivist idea of a living Constitution is a corrosive that gnaws like a lipless lamprey at the crumbling girders of our civil liberties.

Even when the Supreme Court fails to act, it does so when the high court’s rationale could prove to be dispositive of a fundamental question concerning the very nature of our social compact. The definition of the family is of so fundamental national importance that the court is guilty of gross malfeasance when it leaves the question to quarrelsome and fractious special interests entrenched in the several states. Instead of pursuing the interests of a more perfect union, the court has played the accomplice to balkanizing influences seeking special rights not heretofore recognized in the tomes of constitutional jurisprudence or in the vast store of the common law.

The Lesbian, Gay, Bisexual, and Transgendered (LGBT) community seeks special rights for behavior adopted by choice and habituated by a community of sympathizers. It seeks special rights in contravention of the laws of nature which teaches by clear example that the fundamental components of procreative societal association are between a male and a female. Homosexuality is a deviancy that is not recognized in nature and is not perpetuated biologically--left in isolation, same sex couplings would become extinct within a generation. It is artificial and unsustainable. Any society encouraging a homosexual lifestyle by providing special governmental sanctions for what is fundamentally an anti-social association ensures its immediate weakness and ultimate extinction.

Our constitution and religious heritage have created a society characterized by unparalleled benevolence and tolerance for a myriad of traditions and beliefs. Our constitution is fundamentally a document that constrains the power of intrusive government while America’s predominant religious tradition recognizes that man’s essential need is spiritual and its sphere of influence is propagated by non-coercive spiritual means. This is why homosexuals are treated with a great degree of beneficence and not summarily executed as in Islamic or other totalitarian societies.

Conservatives posit that what a man or woman chooses to do in his or her bedroom is not within the purview of legitimate government interest. However, mere pursuit of individual happiness is not the real objective of the LGBT community. It is, in fact, a political movement that seeks special rights for its constituency and has no qualms about trampling the civil rights of individuals and groups that it deems to be hostile to its objectives. It is a militant social faction organizing around a self-destructive principle, seeking to clothe itself in legitimacy. The LGBT movement has insinuated itself into the popular culture by means of a complicit entertainment industry and through an intimidation effort designed to smear opponents as bigoted homophobes. Furthermore, it is ultimately dehumanizing, in that it denies the biologically obvious nature of men and women. Same sex marriage is a denial of the most obvious characteristics and relationships designed in the sexes. It is also an affront to the civil rights movement that, at great cost, secured the rights of truly oppressed peoples who suffered unspeakable indignities, not by choice, but by dint of the color of their skin.

Many who favor same sex marriage often exclaim, "you can't help who you fall in love with." This sentiment entirely misses the point. Marriage is not, and has never been, defined with reference to a sentiment. If the sentiment of love defines marriage, then what results if someone decides he or she loves a dog, a horse, or a twelve-year-old child? On this basis, the institution of marriage becomes an absurdity. Marriage must be defined with reference to the act of procreation and within the context of the traditional family. This comports with biology, millennia of tradition, and most importantly, with Biblical precepts. Concepts of fairness simply do not apply to same sex marriage since it is, at every step, an act of choice. Experience is replete with examples of people making counterproductive choices, i.e. substance abuse, criminal activity, and suicide.

The LGBT community may celebrate the recent non-decision of the Supreme Court as some sort of victory. However, any advancement of their agenda is unavoidably a pyrrhic victory. LGBT successes are immediately destructive, and will ultimately result in the debasement and disintegration of American culture and society. This is the inevitable result of a dispassionate biology, functioning according to a law eternal and not amendable to the boggled-eyed hysterics of a demented mob.