Was George Washington A Domestic Terrorist? 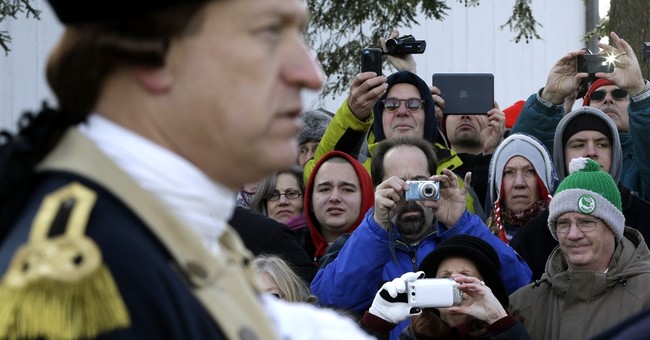 “…the American revolution was violent and it was illegal.” Bill Ayers, Co-Founder of Weather Underground.

Radicals compare themselves to America’s Founding Fathers. However, it’s hard to envision George Washington cowering behind a bush while pressing a detonator. In battle, Washington rode on horseback, completely exposed, leading his army of citizen soldiers into leaden clouds of heavy musket balls fired from sneering, massed English troops bent on dealing death and mayhem. But, Washington was no stranger to valor. Prior to the War for Independence, Washington displayed the heroism which was to become his hallmark when, during the Battle of Monongahela, he was so exposed to enemy fire that two horses were shot from underneath him and his coat was pierced by four musket balls. A petty criminal like Bill Ayers is reduced to the stature of a tapeworm in the shadow of General Washington. It is breathtakingly ironic that radicals compare themselves to the founders of a society that they are desperate to destroy.

Radicals like Ayers lurk in the shadows, hurl bombs at innocents, and then flee the scene of the crime. Conversely, America’s founders stood before God and king and made their cause known and their intended actions plain.

The American Revolution began with America’s intellectual and social elite. It was not a mob action, but an orderly defense of human rights by men and women of dignity and means. They were not a desperate mob of lemmings but leaders in political theory, thoughtful, temperate, highly educated, with their lives and fortunes at risk. The American Revolution was not a “bottom up” enterprise. Though the continental army was composed of citizen soldiers from every walk of life, the founders were characterized by greatness and produced the most noble and unique political document in human history. In a world characterized by violence and slavery, they made the promise of equality before the law a fait accompli.

Unlike our Founding Fathers, domestic terrorists like Bill Ayers employ violence based on illusory provocations and as a matter of course. The Declaration of the Causes and Necessity of Taking Up Arms states: "We, for ten years, incessantly and ineffectually besieged the Throne as supplicants; we reasoned, we remonstrated with Parliament, in the most mild and decent language." Additionally, the violence perpetrated by the Weather Underground was indiscriminate in its application and, therefore; engineered to impel political change through fear and intimidation. Criminals like Ayers employ the use of propaganda to lend a veneer of legitimacy to their cause such as claims of atrocities in Vietnam or American imperialist intentions in that region. Any criminal behavior by military personnel in Vietnam were prosecuted by Military Court Martial. What justice did Ayer's brand of indiscriminate violence bring to anyone allegedly victimized in Vietnam? Furthermore, the charge of imperialism is absurd on its face, since American forces were demonstrably in South Vietnam to secure the same natural rights for the Vietnamese people that we in America enjoy. What has been the result of our withdrawal, the stated aim of terrorists like Ayers? Slavery to a totalitarian state and poverty.

But, the American Revolution was based on claims well known to be true at the time and set forth with reason and logic. The Declaration of Independence details the complaints against the Crown and the rights infringed upon:

“We hold these truths to be self-evident, that all men are created equal, that they are endowed by their Creator with certain unalienable Rights, that among these are Life, Liberty, and the pursuit of Happiness.—That to secure these rights, Governments are instituted among Men, deriving their just powers from the consent of the governed,—That whenever any Form of Government becomes destructive of these ends, it is the Right of the People to alter or to abolish it, and to institute new Government”

The founders made no spurious claims to patently false claims. Men like General Washington were impelled to force of arms by the direct infringement of their own natural right to life and liberty. The founders' appeal was to the law of nature and to nature's God. Resorting to arms was an act of personal and national self-defense clearly based on natural law principles elucidated by men like Samuel Rutherford.

Rutherford and the Bible teach that the power of government is devolved from God for a specific purpose. Governments are legitimate so long as they serve the Divine function of rewarding the good and punishing evil. If a government ceases to reward the moral good as defined by Divine revelation then its grant of power and authority ceases; it has perverted its proper ministry and becomes itself evil. If a government denies its people their natural liberty they are morally obligated to avail themselves of political means to alter that form of government. If liberty is denied at the point of the sword, then citizens become morally obligated to take up arms in defense of their inalienable rights.

Was George Washington a domestic terrorist? The question should, at this point seem absurd. Washington and the rest of the founders were reacting to a threat to their liberty that was immediate and deadly. They were characterized by self-sacrifice and humility, not the hubris of a creature like Bill Ayers who agitated for and materially contributed to bombings resulting in the deaths of innocents.

Radicals like Ayers are murderers whose innocent victims are slain with malice-afore-thought, with violence often an end in itself. After all, Bernardine Dohrn, wife of Bill Ayers, coldly commented about the Tate-LaBianca murders,"First they killed those pigs, then they ate dinner in the same room with them, then they even shoved a fork into the pig Tate's stomach! Wild! Dohrn, Ayers’ soul mate, also stated, “The Weathermen dig Charlie Manson.” The words of a patriot? Hardly. By their fruits you shall know them. The radical left has delivered murder, mayhem, poverty, and human misery. Our founders created a bastion of liberty and prosperity which is the envy of the world.