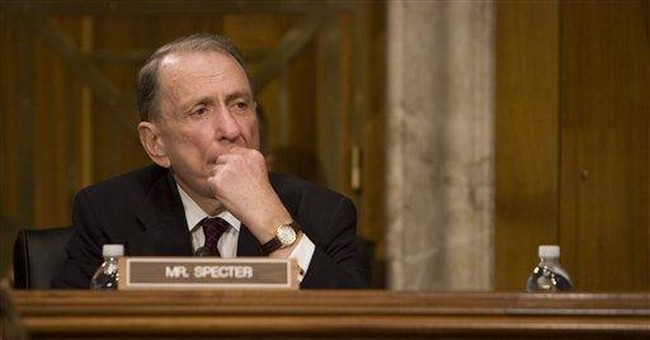 At 4:07 p.m. Tuesday, the front page of the Democratic National Committee website flashed the headline: "Welcoming Sen. Specter to the Democratic Party."

"Earlier today, Senator Arlen Specter left the Republican Party and he is now a Democrat," the DNC announced. "Help us welcome Sen. Specter. Post a comment."

Twenty-four hours later, not a single visitor to the widely-visited DNC site saw fit to comment.

[-] Pennsylvania Sen. Arlen Specter speaking Wednesday at the White House. The senator is hoping he can now win reelection as a Democrat, given he was trailing Republican challenger Pat Toomey, a former Pennsylvania congressman, by a sizable margin in the polls

The May 2009 Harper's Index, not surprisingly, reflects heavily on the economic downturn in this country, including this pair of eye-openers:

Percentage of all U.S. men over twenty who are now unemployed or not seeking work: 31

It will be revealed at the National Press Club on Thursday to what extent the lack of English proficiency is hurting the United States (actually, we'll go ahead and disclose an estimated $65 billion in annual lost wages due to poor English speaking skills in America).

Rep. Steve King, Iowa Republican, and event host ProEnglish will discuss a new Lexington Institute study on the value of English proficiency. The congressman will also provide an update on efforts to make English the official language of the federal government.

It's doubtful English will ever become the official language of the United States, given the Obama White House has already set out to speak in another tongue.

In fact, the Obama team on Wednesday saw fit to excerpt leading Spanish-language media coverage of President Obama's first 100 days in office, including an accolade that the White House two weeks ago, for the first time ever, carried out a bilingual press conference in English and Spanish.

Otherwise, Spanish-language media applauded Mr. Obama for his "intense" outreach to Hispanics, who for the first time represent nearly 10 percent of presidential appointments that require Senate confirmation. This compares to 5 percent under President George W. Bush and 4 percent under President Bill Clinton during the same time period.

Mr. Obama so far has 26 Hispanics - Puerto Ricans, Dominicans, Colombians and Cubans among them - working at the White House in a variety of senior-level posts. Hispanics make up 14 percent of the U.S. population.

Hopefully there won't be any shouting, spitting and shoving between agitated guests when TV talk show host Maury Povich returns to his hometown of Washington to take on teen pregnancy.

Actually, Mr. Povich will lead a candid conversation (not affiliated with his show) on teenage pregnancy at the National Press Club on May 5, the eve of the 8th annual National Day to Prevent Teen Pregnancy.

Among other panelists: Ann Shoket, editor in chief of Seventeen Magazine, and teen actress Kristen Alderson of ABC's "One Life to Live."