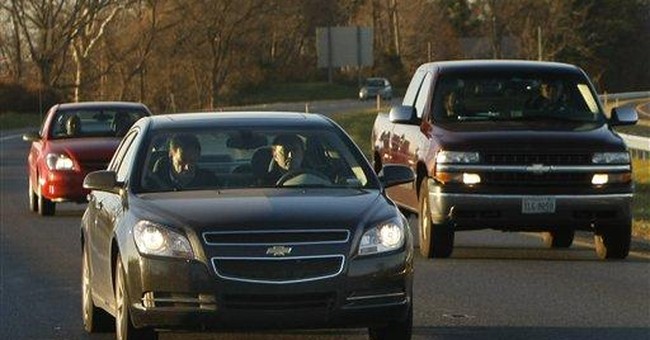 Rep. Cathy McMorris Rodgers, Washington Republican, observes: “History teaches us that the pharaohs drove Egypt to bankruptcy building the pyramids. At least they got pyramids.”

So is the Senate's esteemed chaplain, Barry C. Black, now offering up personal prayers for Senate Majority Leader Harry Reid while the Nevada Democrat legislates his way through the economic crisis?

On hand every morning to bow his head as Mr. Black convenes the Senate in prayer, Mr. Reid suspects that might be the case.

“Often, these prayers are directed, it seems, to me,” confesses Mr. Reid, who adds: “I guess that is what prayers are all about.”

Additional energy-efficient legislation has been introduced by Rep. Jane Harman, the California Democrat whose revolutionary 2007 bill-turned-into-law bans 100-watt incandescent light bulbs by 2012, phases out inefficient bulbs by 2014 and requires bulbs in 2020 be at least three times as efficient as today's.

Now the congresswoman's new bill targets outdoor lighting, which she says is provided by “outdated and inefficient technologies.”

Rather than incandescent and halogen lights, her legislation would require “super-efficient light emitting diodes, or LEDs.” In addition, all outdoor lights would come with bi-level, or dimmer-switch controls, allowing users to alter the amount of light emitted.

“You don't need the same level of brightness at dusk as you do in the middle of the night,” she argues.

It's been more than 50 years since a now-”antiquated” United States criminal code was revised to reflect the modern world, and now a Republican congressman aims to bring it up to date, cut its size by one-third and make it user-friendly.

Take the word “willful,” says Rep. F. James Sensenbrenner Jr., Wisconsin Republican, which appears throughout the code despite the Supreme Court complaining that it's “a word of many meanings.”

“Courts have described 'willful' as meaning a high degree of culpability, such as a bad or evil motive,” the congressman notes. Indeed, the late federal judge and judicial philosopher Learned Handargued a half-century ago:

“It's an awful word! It is one of the most troublesome words in a statute that I know. If I were to have the index purged, 'willful' would lead all the rest in spite of its being at the end of the alphabet.”

The revised code would employ a straightforward approach, Mr. Sensenbrenner says, and where possible the term “knowingly” would be used to define the intent for most every crime.

“The term 'knowingly' means that the act was done voluntarily and intentionally,” he explains.

”CJR's running total of journalists laid off or bought out since January 2007 was 11,250 by mid-February, and we surely missed some. Our fear is that America won't realize what it has lost until the mainstream press is a ninety-pound weakling - online, on paper, on whatever. And in the words of Joseph Pulitzer, in a paragraph that sits on a brass plaque in the building where we work, 'Our Republic and its press will rise or fall together ... .' ”

- Dispatch this week from the editors of the Columbia Journalism Review