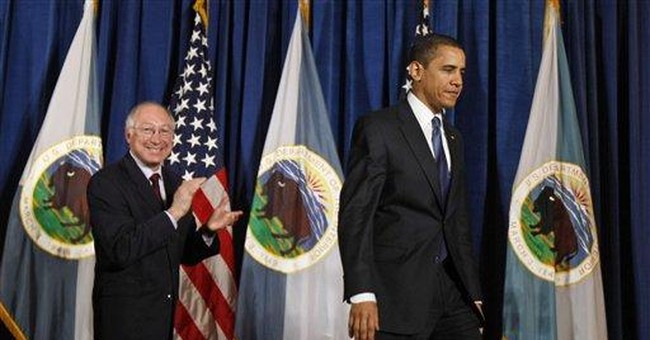 The complaint, filed by Judicial Watch, further claimed that the discounted mortgage rate was a prohibited corporate contribution that was never reported.

The complaint was filed July 8 after it was reported that the Illinois senator received a home loan of $1.32 million at a rate of 5.625 percent, although the average going rate on that same day was reportedly between 5.93 percent and 6 percent.

In addition, the complaint had charged, unlike what was reportedly available for the public, the special below-market loan was secured without an origination fee or discount points.

We've just learned that Al From, who founded the Democratic Leadership Council (DLC) more than two decades ago, will retire later this year and that he's asked Bruce Reed, the DLC's president, to succeed him as chief executive.

Mr. Reed, you might recall, recently co-authored “The Plan: Big Ideas for Change in America” with none other than President Obama's White House Chief of Staff Rahm Emanuel.

OK, let's get this straight: Tom McMahon, until lately the executive director of the Democratic National Committee (DNC), is joining Americans United for Change (AUFC) as acting executive director, succeeding AUFC President Brad Woodhouse, who is leaving to become director of communications and research at the DNC.

We had to laugh at Matt Mackowiak's farewell letter as press secretary to Sen. Kay Bailey Hutchison, Texas Republican.

”After two years, traveling to all 20 Texas media markets, over 217,000 e-mails (including 57,000 sent e-mails), fielding thousands of press calls, and writing, editing and sending hundreds of press releases, today is my last day,” he wrote.

A resolution is being introduced in Congress on Wednesday that would mark the second Tuesday in March as National DVT Screening Day in honor of the late Washington Rep. Jennifer Dunn, who died from a pulmonary embolism resulting from DVT.

Up to 2 million Americans suffer from DVT, or deep vein thrombosis, every year, and about 300,000 die from a related complication called pulmonary embolism. Miss Dunn collapsed and died of a pulmonary embolism in 2007 in her Alexandria apartment.

At the time of her death, she was co-chairman of Women for Mitt in support of Republican presidential candidate Mitt Romney.

While recognizing that many Americans this tax season are experiencing difficult times financially - some losing their jobs, others finding incomes decreased or else tapping into retirement funds - the Internal Revenue Service says to “file a tax return even if you are unable to pay” to avoid additional penalties.

And get this: the IRS says the loss of a job creates new tax issues.

“Severance pay and unemployment compensation are taxable,” it warns. “Payments for any accumulated vacation or sick time also are taxable. You should ensure that enough taxes are withheld from these payments or make estimated tax payments to avoid a big bill at tax time.”

If it's any consolation, food stamps are not taxable.