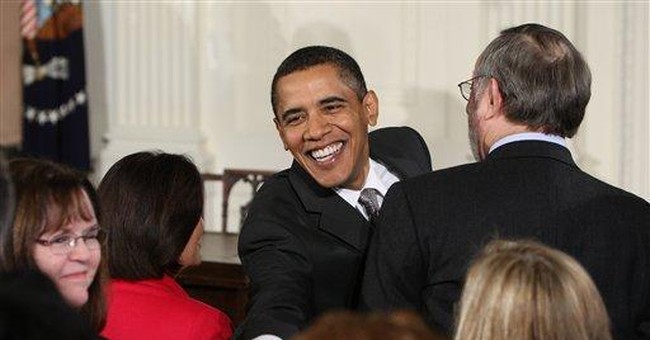 That was the "first former welfare mother to serve in Congress," as Rep. Lynn Woolsey's official bio states, reciting "the good, the bad, and the ugly of the Bush administration" on the House floor this week.

First, however, the California Democrat pointed out that the era of foreign policy "based on pre-emptive strikes, military might and bullying" is over and that the United States "led by President Obama will return to our national ideals of diplomacy and international cooperation."

As for the collection of Bush evils, it was compiled by the Council for a Livable World, and as the congresswoman noted the "goods" are far fewer than the "bads" and the "uglies."

Gee, I thought that Obama brought hope,
Not a trip down the slippery slope.
Now I see that his change
Is a kind that is strange,
And I feel like a big, stupid dope!
-- F.R. Duplantier

Inside the Beltway caught up with piano-playing satirist and comedian Mark Russell while he was dining Wednesday night at Teatro Goldoni restaurant in Washington.

"I was upset after he finished his inaugural address that the cherry blossoms didn't bloom and the Potomac River didn't turn into Bud Light," Mr. Russell replied.

Speaking of political satirist Mark Russell, we see that he is the entertainment for Saturday's National Press Club "Presidential Inauguration."

No, the black-tie optional gala is not in honor of President Obama, rather it's for USA Today reporter Donna Leinwand, who was just elected the 102nd president of the 3,500-member club (there will be a good-natured roasting of the new president by some "familiar faces," we're told).

Otherwise, no better time to have somebody of Miss Leinwand's caliber at the helm of the world's leading organization for journalists. After all, the Boca Raton, Fla., native covers "crime and disasters" for the newspaper, of which there is no shortage of late in the hallowed halls of Washington.

Ever wonder how the cable TV news channels book the endless lineups of talking heads that fill the 24-hour on-air cycles with dialogue and analysis, if not chitchat and chatter?

Suffice it to say, booking the best television guest has become big business.

Cheryl Davis, a former "booker" for CNN International and ABC's "Good Morning America," runs the Washington bureau of GuestBooker.com, which this month celebrates three years in existence. She explains to Inside the Beltway that network booking has become increasingly competitive in recent years, with producers and talent bookers competing against each other for the most sought-after, top-notch guests.

"We are not in the business of public relations, we simply focus on the needs of the network bookers. Because we think like them, we are able to deliver the guests they need," says Miss Davis.

The company, also with offices in New York and Nashville, is headed by former CNN and MSNBC producer George Uribe, who once booked guests for the Fox News Channel.

"People who work in television news are hardworking professionals. We seek to be a resource for them upholding the integrity of journalistic standards with each booking," says the founder and chief executive officer. "Our niche is not just in finding the guest, but in thinking of the various elements which make a segment great."