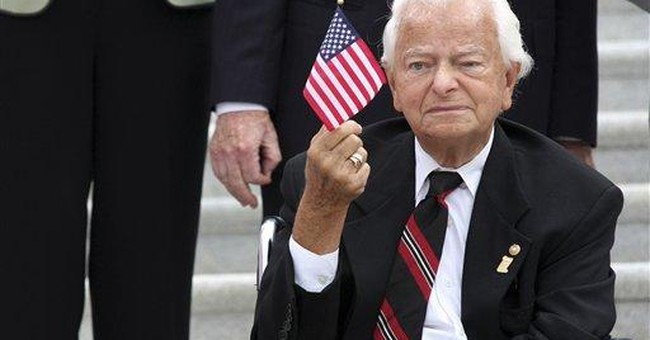 We'd observed last week that Sen. Robert C. Byrd of West Virginia, at age 91, is the longest-serving member in the U.S. Senate's history, having taken office on Jan. 3, 1959.

Now, one West Virginia reader wants to remind us that before he became a senator, Mr. Byrd served three terms in the U.S. House of Representatives, having been first elected in 1952. (During all these years, Mr. Byrd has an amazing 98.7 percent attendance record).

As for the longest-serving representative in the House, that would be Jamie Whitten of Mississippi, a conservative Democrat who served 53 years, two months, 13 days. His 1995 obituary in the New York Times described the congressman as having a style of deliberate vagueness that stirred a mixture of admiration and frustration among House colleagues.

It was explained that he had a technique of dropping his voice and thickening his already strong Southern drawl when he wanted to disguise his true purpose. "Mr. Mumbles," Rep. Silvio O. Conte, Massachusetts Republican, called Mr. Whitten in 1985.

"He'll give you an ulcer," Mr. Conte said. "Dealing with him is like throwing putty at a wall."

Five if not more of the major candidates to become chairman of the Republican National Committee will hold a Jan. 5 debate in Washington.

"We are working with bloggers and other activists to develop the questions to be asked during the forum, and we encourage everyone to visit rncdebate.org in the coming days to submit and vote on questions," says Grover Norquist, whose group Americans for Tax Reform is sponsoring the debate.

Speaking of the Republican National Committee, it has launched a new Web video titled "Questions Remain."

The video highlights "evolving" explanations delivered by President-elect Barack Obama and his advisers concerning their contact with scandal-plagued Illinois Gov. Rod R. Blagojevich, despite what the RNC calls Mr. Obama's promises to instill greater transparency and confidence in government.

He quotes Saleem Huq, a lead author of the Intergovernmental Panel on Climate Change, as saying: "Bush will go down in history as possibly a person who has doomed the planet."

Did you know that in August 1957, at the National Theatre in Washington, the ground-breaking musical "West Side Story" made its world premiere?

"It now returns to the place where it all began," says Center Stage Marketing's Deb Fiscella. By the way, in recognition of the show's place in Washington history, the D.C. Council has declared Dec. 15 as "West Side Story" Day.

A new production of "West Side Story," which runs through Jan. 17 prior to its Broadway run, is directed by two-time Tony Award winning librettist Arthur Laurents. The original Jerome Robbins choreography will be restaged by Tony Award nominee Joey McKneely ("The Boy From Oz," "The Life").