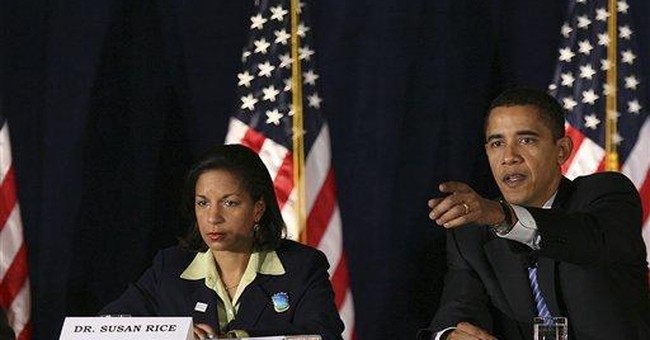 Wow, the State Department Federal Credit Union doesn't mess around when its members fail to make contractual payments on time, going so far as to wake up its customers at ungodly hours of the morning.

While this columnist does not have and never has opened an account with the credit union, my home telephone startled me awake at 1 a.m. Sunday with a prerecorded warning that if I don't pony up some dough posthaste it will repossess everything but my dog.

Chartered in 1935 through the efforts of eight employees of the Department of State, the credit union boasts of 64,000 members worldwide, offering a wide range of financial products.

We've written before about Washington PR mogul and author Peter Hannaford. He was spokesman for Ronald Reagan when the former president was governor of California, and he was senior communications adviser for the Gipper's 1980 presidential campaign. He bypassed "semiretirement" upon moving to Northern California by accepting the post of editorial-page editor of the Eureka Reporter.

Now, Mr. Hannaford sends Inside the Beltway a clipping from his newspaper, the headline: "Dalai Lama hospitalized in New Deli following checkup."

Quips the editor: "My advice to the Dalai Lama: Going to a new deli for a pastrami sandwich is risky. Always go to an old, reliable one."

Every year, one of Washington's favorite political bloggers, Howard Mortman, compiles a top-10 list of funniest (if not pathetic) quotes uttered by our politicians. Without further ado, the 2008 honorees:

9. Former Sen. John Edwards on cheating on Elizabeth Edwards: "Can I explain to you what happened? First of all, it happened during a period after she was in remission from cancer."

8. House Speaker Nancy Pelosi, California Democrat: "I have always loved longitude. I love latitude; it's in the stars. But longitude, it's about time."

7. President Bush, meeting with President Gloria Macapagal-Arroyo of the Philippines: "I reminded the president that I am reminded of the great talent of the - of our Philippine-Americans when I eat dinner at the White House."

6. President-elect Barack Obama: "Can you imagine if you had your Social Security invested in the stock market these last two weeks? These last two months? You wouldn't need Social Security. You'd be having a - you know like, what was it, 'Sanford and Son,' 'I'm coming, Weezie.' It ain't right."

Gen. Petraeus: "Senator, the vice president was in Iraq just a couple weeks after that, and he also had a very warm reception."

Gen. Petraeus: "I believe he did get kissed when he was there."

Mr. Biden: "I just want to know whether he got kissed, that's all."

4. Sen. John McCain: "We should be able to deliver bottled hot water to dehydrated babies."

Miss Couric: "[W]hat newspapers and magazines did you regularly read before you were tapped for this to stay informed and to understand the world?"

Mrs. Palin: "I've read most of them, again with a great appreciation for the press, for the media."

Mrs. Palin: "Um, all of them, any of them that have been in front of me all these years."

2. MSNBC's Chris Matthews: "It's part of reporting this case, this election, the feeling most people get when they hear Barack Obama's speech. My, I felt this thrill going up my leg. I mean, I don't have that too often."

1. Former President Bill Clinton: "The country is groaning and moaning and screaming for change."

We'd written on Thanksgiving Day of Ben Franklin's desire for the turkey to become the representative of the United States, not the bald eagle, calling the former a "much more respectable bird, and withal a true original native of America."

Now, Inside the Beltway reader John Lockwood, of Northwest Washington, writes: "Well, the turkey is not entirely without honor in his own country, or even here in Washington, D.C. I enclose two photos I took a few weeks ago. One shows a bas-relief turkey, one of several, decorating the wall of the biggest Agriculture Department building, along the south side of Independence Avenue SW.

"The other is from the little block-shaped memorial, about 5 feet high, dedicated to the 'patentees' or original landowners in the late 18th century, whose farms and lands became the District of Columbia. It is just east of the Ellipse's curving sidewalk, near the Boy Scout Memorial."