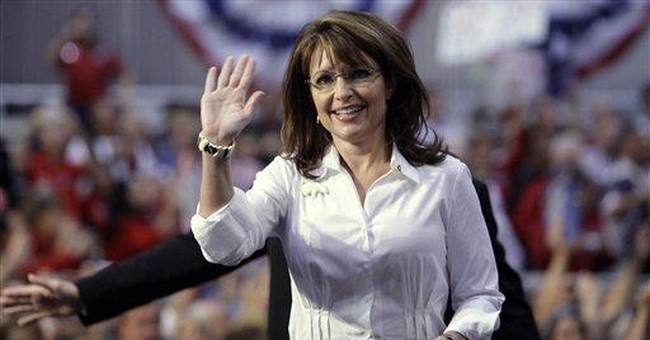 No, we're not referring to Angelina Jolie's latest adoption, rather the simple announcement found on one of the more popular 2008 presidential campaign buttons - pink in color - available through John McCain's official campaign store, GOPTrunk.

The button refers to the Republican Party's first female vice-presidential candidate, Sarah Palin, although it can obviously be used again and again for whenever the stork arrives.

Once upon a time it was mostly low-and-moderate income Americans who were familiar with the grass-roots organization ACORN, the Association of Community Organizations for Reform Now, for which Barack Obama toiled as an organizer and lawyer during the 1990s.

Now, suddenly, the agenda of the activist group, which has chapters in some 110 cities across the U.S., has been thrust into the 2008 presidential campaign spotlight by Mr. Obama's opponent, Republican presidential candidate John McCain.

The latter has suggested that ACORN, by its heavy hand when dealing with financial lenders, helped fuel the mortgage industry meltdown by forcing large banks to provide low-income housing loans.

"What did ACORN in Chicago engage in?" asks one official McCain ad. "Bullying banks. Intimidation tactics. Disruption of business. ACORN forced banks to issue risky home loans. The same types of loans that caused the financial crisis we're in today."

Legitimate charges, or more of the usual election year hype?

Inside the Beltway was contacted Monday by District-area resident LaDonna Hale Curzon, who writes: "I remember many years ago, when I was an editor for Mortgage Banking Magazine at the Mortgage Bankers Association of America, a group of ACORN members stormed MBA's reception area and staged a loud protest.

"They refused to leave when asked by a MBA staff member. The receptionist was frightened to silence. They demanded a meeting with MBA's CEO, which eventually happened."

It's not John McCain, rather the National Black Republican Association that just issued the following statement:

"With Obama supporter black Democrat Congressman John Lewis leading the charge - comparing Sen. John McCain and Gov. Sarah Palin to the 1960's racist Democrat George Wallace - the Obama camp has tossed a racial firebomb into the election, a blatant attempt to intimidate average Americans into voting for Sen. Barack Obama who is a far left-wing radical socialist, or risk being called a racist."

So where did the White House plant the team of reporters that accompanied Mr. Bush in his motorcade, otherwise keeping them out of sight of the president's actual bike riding?

In the "any excuse to drink" category, we've been invited to a "Last Chance to Drink for Victory" fundraiser for Barack Obama, beginning at 6:30 this evening at Porter's Dining Saloon in downtown Washington.

"Let's start by enjoying some drink specials," say organizers on Mr. Obama's official campaign site. "And bring your friends, roommates, lovers, colleagues or any other Democrat you can find. Raising a big chunk of change is important, but we also want to get everyone together so we can get fired up and ready to go."