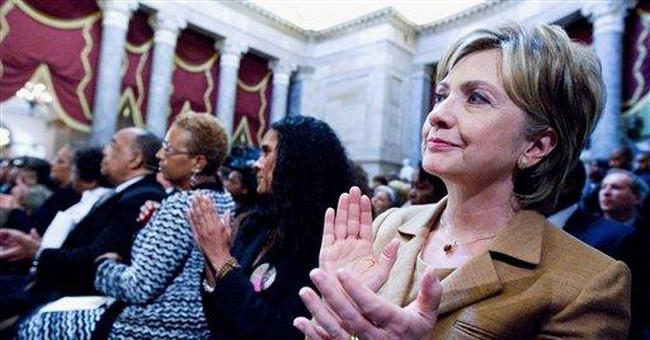 The previous time New York business leader and Democratic activist Bill Arnone surveyed some five-dozen of his fellow staunch Sen. Hillary Rodham Clinton supporters, they indicated they would "either vote for McCain-Palin or for neither ticket, or were undecided, or would write in Senator Clinton's name."

Now the former volunteer adviser to Mrs. Clinton's campaign has asked the group of Democrats: Would you change your mind if Mrs. Clinton were to replace Sen. Joseph R. Biden Jr. as the vice-presidential candidate running with Sen. Barack Obama?

The results, which he forwarded to Inside the Beltway: Yes: 56 percent; No: 39 percent; Not sure: 5 percent.

Not surprisingly, many of those who responded "Yes" noted they could not "imagine such a scenario," which remains highly unlikely. Others said that while they would support an Obama-Clinton ticket, they were against the idea, as it would make the Democrats look "desperate."

Then there were those who emphasized they still strongly prefer that Mrs. Clinton head the ticket, even more than unlikely.

Finally, some of Mrs. Clinton's supporters indicated they would not vote for any Democratic ticket in November as a protest "against the Democratic National Committee," which created further division within the party when it would not allow some states' votes to count in the primary.

As for Mr. Arnone, who is with Ernst & Young, he spoke with Mrs. Clinton last month when she threw a thank-you reception for her supporters in Manhattan.

"If Hillary Clinton had looked me in the eye and said, 'Bill, do for Barack Obama exactly what you were doing and would have done for me,' then I would devote all of my energy to helping him and would encourage others to do the same," he wrote in a recent op-ed.

"Instead, what I heard was a candid acknowledgment that it is taking more time for some to transfer their enthusiasm to another candidate after so closely contested and contentious a campaign for the nomination.

"Senator Clinton did say that she preferred that we make as our top priority uniting to elect a Democratic president in November. She offered, however, as an alternative that we work hard to elect more Democrats to the Senate."

Number of bids submitted by the close of the auction at noon Monday: 0

The pin surrounds the first joint public appearance for Mr. Obama and Mrs. Clinton since she exited the presidential race and endorsed his candidacy. It was hoped that the name of the small town, where each candidate received exactly 107 votes, would unite Mrs. Clinton's disgruntled voters.

Sat down to read the Constitution lately — if ever?

Rep. K. Michael Conaway of Texas has introduced the America Resolution, which would require all staff and officers of the House of Representatives to read the Constitution once a year, and encourage all members of Congress to do the same.

He said, "the document at the very foundation of our republic is often considered only as an afterthought during our debates."

Head Start has been described as "the most important social and educational investment in children, families, and communities that the United States has ever undertaken."

The man widely recognized as "The Father of Head Start," Dr. Edward Zigler, director emeritus of the Edward Zigler Center in Child Development and Social Policy at Yale University, will be on hand to welcome the 25th million honorary child, selected from the Washington area.

"The best response to political jabs like this is simply to put your head down and not lose a step doing the best job you can possibly do on behalf of those you serve. For my part, I plan to do just that. I leave the political campaigns to pursue their own course."

— Securities and Exchange Commission Chairman Christopher Cox, a former congressman from California, responding to fellow Republican Sen. John McCain's call for him to be fired in light of the current financial crisis.