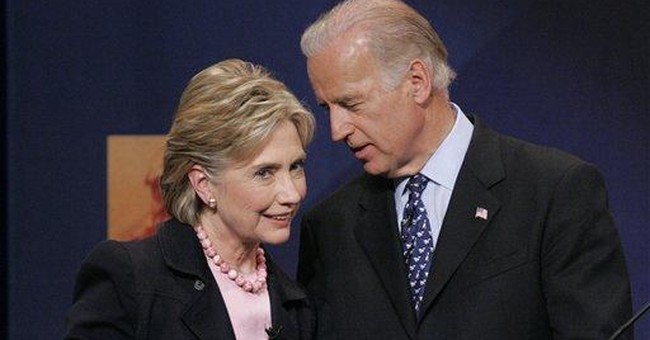 Both politicians earlier endorsed Sen. Barack Obama for president because of his desire to unify the country. Wouldn't you know, Democrats are now finding it difficult to unify their own party.

On Nov. 4, voters will choose "the lesser of two evils" to become president of the United States.

"This is a battle to become the lesser of two evils, rather than the best of the bunch," says Washington political pollster Frank Luntz, who in a memo obtained by Inside the Beltway on Monday writes that so-called floating, or undecided voters, "have huge hang-ups with both candidates," albeit for different reasons.

"Obama's weakness is his lack of definition and the fear that he really doesn't have any answers," Mr. Luntz says of Democratic candidate Sen. Barack Obama, while Republican Sen. John McCain's "weakness is a fear that his answers are too closely aligned with President Bush."

His memo comes on the heels of a political dial session that Luntz, Maslansky Strategic Research conducted Sunday on behalf of AARP.

"I have done roughly 500 political dial sessions in the past 10 years — most of them with floating voters. In that time, I've seen them break for one candidate or another based on ads, debates, interviews and other stimuli. But never have I seen them divide unanimously in favor of one attribute over another," Mr. Luntz says in the memo.

The dial session, conducted in Denver, gave respondents 30 different attributes to rate in importance. Not only did accountability come in first, but it outranked 'change' in importance to 20 of the 21 participants. By comparison, 'agrees with me on the issues' was chosen by just one person.

Says Mr. Luntz: "The candidate who can capture the audience's perceptions of accountability will win. Period."

Soon it will all be about the "bounce." Or will it?

Larry J. Sabato, director of the University of Virginia Center for Politics, explains that the "bounce" is the jump in the polls a political party experiences as a result of its week of "media propaganda, broadcast free on all major news networks and in every news publication."

Writing for the center, Mr. Sabato says traditionally once the conventions have concluded, both parties "compare their bounces, and inevitably someone has a case of bounce envy."

But don't pay the bounce much attention.

"Bounces can fade quickly," Mr. Sabato cautions. "Historically, this has been truer on the Democratic side. Jimmy Carter slid from 63 percent after his convention to 51 percent on Election Day 1976, Michael Dukakis from 54 percent to 46 percent in 1988; and Bill Clinton from 59 percent to 43 percent in 1992."

And don't think Republicans have the advantage, either, for holding their convention last.

"It doesn't make all that much difference which party has the first or second convention," Mr. Sabato says. "Pretty propaganda shows can move polls temporarily, but it is the election fundamentals that determine the general election outcome."

Grandparents for Obama are among the throngs attending the Democratic National Convention in Denver.

Concerns include the future of Social Security, as well as leaving their grandchildren with a legacy of bad economy and indebtedness, a failing educational system, lack of access to health care, a deteriorating environment and endless war.