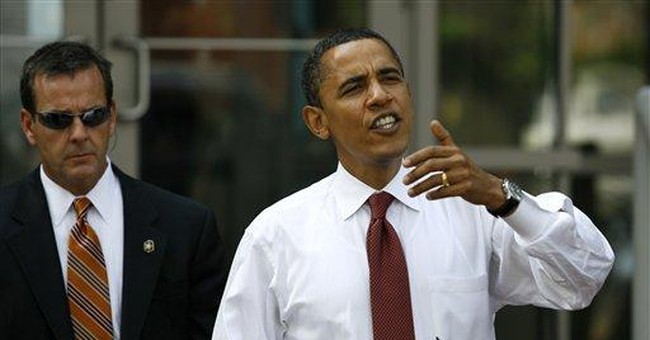 "Last Sunday, Kurtz argued: 'All of these liberal commentators who have always supported campaign finance reform, getting big money out of politics, many of them are defending Obama. And I have to think the press is cutting him a break here.'

"Kurtz concluded the segment by saying, 'If George W. Bush had done this, blown off public financing as he considered doing during the 2004 campaign, there would be howls in the media about one candidate trying to buy an election.'"

The congressman also called attention to a recent poll showing by more than a 3-to-1 margin that voters believe the media favors Mr. Obama over expected Republican presidential nominee Sen. John McCain.

It was only a matter of time before somebody created the Obama Action Figure.

"Like countless others out there, we've been inspired by the meteoric rise of Barack Obama and his campaign," says an obviously impressed doll maker, Jailbreak Toys, which manufactures similar 6-inch-high dolls of world leaders ranging from Mahatma Gandhi to Vladimir Lenin.

"In a time when America so desperately needed a hero, along came a man to show us a brand new version of what America and the world could be in the 21st century. In many ways, Obama is the closest thing we've ever seen to a superhero, someone who has literally inspired millions of people simultaneously to step past fear, to be brave enough to hope and to go past cynicism and imagine what we could be if we were at our best. That's the stuff of legend! And we wanted to pitch in."

"Barack Obama travels a lot, but many babies live in places he hasn't been," the site states. "That's why he's now accepting babies by mail. Send him your baby, and he'll kiss it and send it back to you.

"Step 1. Package and ship your baby in a well-padded box.

"Step 2. When your baby arrives, Barack will give it your choice of a kiss, a hug, or hope.

"Step 3. Your happy baby returns in about 14 business days."

On a more serious note, the site (www.sendbarackyourbaby.com) features a library of Obama-themed baby photos posted by proud American parents.

Man on the moon

Searching for the equivalent of the moonscape on Earth, NASA has landed in the volcanic ash and sand of Moses Lake, Wash., where it has been conducting a series of field tests in preparation for mankind's arrival — as in living, working and exploring — on the lunar surface.

The space agency recently transported to that region of Washington state, known for its lunarlike terrain, everything from motorized robots and rovers to a state-of-the-art bulldozer that one day could level the moon's surface in advance of erecting a human outpost.

A few years ago, while a student at Catholic University in Washington, Rose Sezniak was waitressing at Pizzeria Paradiso in Dupont Circle and the Irish Channel Pub in Chinatown.

Indeed, she told Inside the Beltway in an interview Thursday, up until January she was bartending in New York City.

Not anymore. This week, the music theater major, who lived on the Catholic campus all four years until graduating in 2005, made her triumphant return to Washington — to the National Theatre, no less — having earned a starring role in the Broadway musical "Mamma Mia!" featuring the songs of the Swedish group ABBA.

"It's a bit surreal to be playing the National, that's for sure, having gone to school in the D.C. area," Miss Sezniak says. "I guess I always saw myself performing here, and hoping for a leading role."