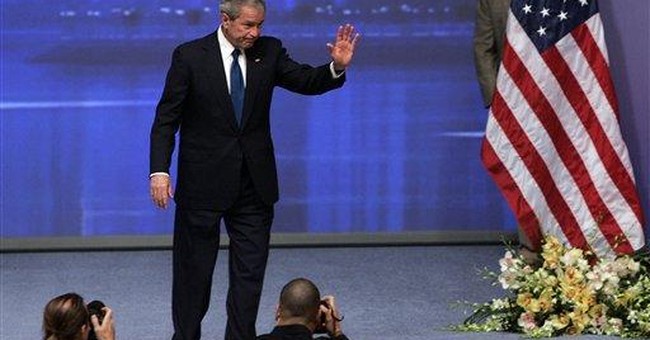 President Bush's comment Saturday that it's "fine with me" if U.S. military generals recommend no more U.S. troop reductions in Iraq beyond those already planned to take effect this spring, reminds us of the birthday card received recently by Mildred Coit, who works in the Alexandria law office of Mark S. Allen.

Vice President Dick Cheney is pictured on the front of the card telling Mr. Bush: "Did you hear we're getting over 100 Brazilian troops to help us?"

"Wow, that's fantastic!" replies the president. "How much is a Brazilion?"

Let the record reflect that Inside the Beltway is not a part of the "onslaught of open misogynistic expression" being directed around the country (or so reports Newhouse News Service) at Sen. Hillary Rodham Clinton as she campaigns to become the first female president of the United States.

We did go so far as to observe last week that oval-shaped bumper stickers touting "H" are increasingly showing up in support of Mrs. Clinton, similar to President Bush's popular "W" stickers. And given "W" is spelled "Dubya," we were curious if "H" might be spelled "Ache?"

The answer is a resounding "no," according to supporters of the former first lady, who say they prefer "Aitch."

Some smart-aleck wrote to Inside the Beltway asking if tonight's world premiere of "Hillary: The Movie," at the AMC Loews Georgetown, would be scuttled by the Hollywood writers' strike — as happened with last night's Golden Globe Awards ceremony.

Not only will the show go on, but Citizens United — not on behalf of Sen. Hillary Rodham Clinton — is inviting local celebrities and VIPs to a premiere party at Sequoia immediately following the screening.

A distinguished gentleman in the District who requests anonymity read our recent profile of Ed Gillespie, counselor to President Bush, and says there's even more to "Eddie" than meets the eye.

We had previously pointed out that if anybody in Washington has paid his political dues, it's Mr. Gillespie, whose very first job on Capitol Hill was parking cars in the Senate garage, albeit soon moving up the ladder to nighttime phone solicitor in the basement of the Republican National Committee headquarters.

Of course, Mr. Gillespie went on to become a top congressional aide, successful lobbyist, chairman of the Republican Party, and since last June he's been at the side of Mr. Bush — spending part of the New Year's holiday at the president's Texas ranch clearing brush for a new bike path.

"He is a seasoned hand," Mr. Bush observed.

"I've known Eddie for a long time, and one unknown fact is what a great flag-football player he was in the 1990s," the gentleman says. "For several years, he played wide receiver for the team I was on — the Rosslyn Gamblers — which was in the Arlington Men's League.

"We started out as the worst team in the brand new league, and year after year we improved, eventually playing in two league championships. And Eddie was one of our two main 'go-to' players — he had great hands, especially scooping up the low passes near and in the end zone. He pulled our bacon out of the fire in several games."

Mr. Thompson wants Mr. Chertoff to develop a plan for what he foresees as an inevitable "mass exodus."