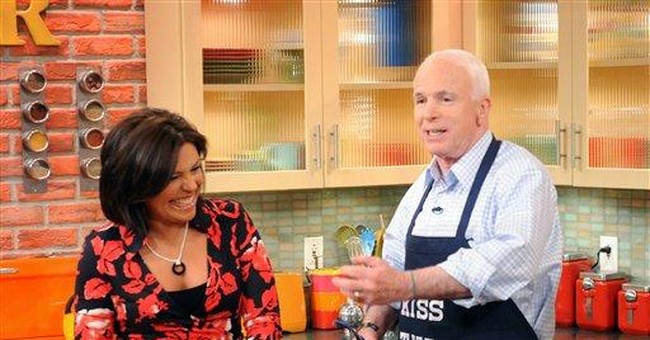 Good morning, this is John McCain, and it's been a great week traveling through America on the campaign trail. Since accepting the nomination of my party, I've taken our campaign to Wisconsin, Michigan, Colorado, New Mexico, Missouri, Ohio, Pennsylvania and Virginia. At each stop, I put Washington on notice that we're going to shake things up in that city. And I had the pleasure of introducing America to Governor Sarah Palin of Alaska.

I was looking for a fellow maverick in a runningmate, and I sure found one in Sarah Palin. As a chief executive of her state, she took on the special interests and lobbyists who had been in control of her state -- and especially the big oil companies. With major ethics reforms, tax cuts, and a half a billion dollars in spending vetoes, she put government back on the side of the people. Governor Palin doesn't have much patience for what she calls the "good-ol'-boys" network. And the good-ol'-boys in Washington aren't going to like her anymore than the ones in Juneau.

Now that our party conventions are behind us, and both my opponent and I have chosen our running-mates, the choice before America is clearer than ever. For Governor Palin and me, change is more than a slogan, and it's not about party. It's about changing the way business is done, and it's the reason we entered politics to begin with.

One of the biggest obstacles to reform today is the Congress itself, where leaders in both parties have sought to raise spending when our country is already nine trillion dollars in debt, to raise the tax burden when our economy is already slowing, and to preserve privileges like earmark spending, which waste your money and keep them in power.

Meanwhile, hard questions are deferred and serious problems are avoided -- the great challenges of energy independence, health care reform, protecting entitlements, education reform, and many others.

This Congress has been in session close to two years and now they have accomplished exactly nothing to meet any of these challenges. Now Senator Obama wants you to believe that things will get better if Democrats control both the Congress and the presidency. But when Americans demand change in Washington, one-party rule where power is an end of itself isn't exactly what they have in mind.

My fellow Americans, if Governor Palin and I are entrusted with four years in the White House, we'll show you what real change looks like. As president, I will veto reckless spending bills, to control the size of government and to let the workers of America keep more of their own earnings. I will put an end to earmark spending, by refusing to sign any bill that contains an earmark. I will lead the cause of health-care reform, by offering every person and family a generous tax credit so they can choose and afford their own health care. I will offer real choice in America's public schools, so that parents, teachers, and principals are in charge instead of union bosses and bureaucrats. And instead of wasting your money on things you never asked for and don't need, we're going to focus on essential priorities like helping American families with tax relief, balancing our federal budget, protecting our people from threats abroad and at home, and regaining control over the cost and supply of energy.

Governor Sarah Palin and I not only promise big change in Washington -- we have records of change to back up our words. We offer not only change you can believe in, but change you can verify. We'll get the job of reform done -- to shake things up in Washington, solve our energy problems, and get the American economy moving again. And whatever your party affiliation, I want every voter in America to know that I am hoping to earn your support in the cause of real reform in Washington.