John Mac Ghlionn
|
Posted: Apr 02, 2021 9:10 PM
Share   Tweet
The opinions expressed by columnists are their own and do not necessarily represent the views of Townhall.com. 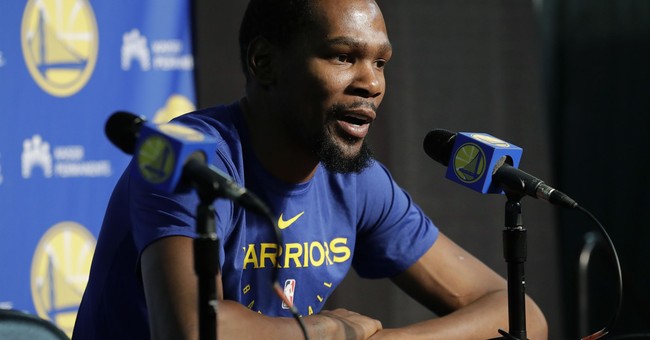 On Tuesday, March 31st, the actor Michael Rapaport took to social media, outraged and supposedly hurt. Rapaport shared a series of screenshots of a private conversation between himself and Kevin Durant, the 11 time All-Star forward. The two men hurled insults at each other, with Durant using a homophobic slur. This wasn’t the Nets star’s finest moment.

In an Instagram post, he wrote: "As most of you know, I receive threats and disgusting messages DAILY, but never in my wildest dreams did I think @easymoneysniper (Durant’s Instagram account name) would be among them. The (snake emoji) himself is now threatening me, bringing up my wife and wants to fight. This is supposed to be America’s sweetheart right? KD didn’t get ‘hacked’ either. Hold this L champ."

There is an important question to ask here – why?

Why would a grown man leak the messages in the first place?

Leave the celebrity aspect aside for a minute. These are two men caught up in a heated exchange. The insults hurled were sent in private. Today, sadly we see the inverse of the Vegas Rule – what happens in private, never stays private.

Durant has since apologized. Can we move on?

Of course not. Rapaport’s actions are a symptom of a broader problem: Tattle-tale culture. Nobody likes a tattle-tale, especially when it’s a grown man snitching on another grown man for calling him names. The only time telling on another is appropriate is when a power imbalance exists. If women are coerced into doing something they don’t want to do by their boss, as was reportedly the case with a string of women and Andrew Cuomo, then raising the alarm is perfectly appropriate. If a teacher abuses a child, be it physically or verbally, then telling someone is, of course, the right thing to do. Oppressive behavior – when it’s genuinely oppressive – needs to be addressed.

However, when it’s two wealthy men exchanging messages in private, we must ask why the alarm was raised in the first place?

Is it because Rapaport is oppressed? Was he fearing for his life? Did he genuinely think that Kevin Durant was going to fight him?

Of course not. The actor spotted a chance to raise the alarm, then proceeded to play the victim. It was a cheap shot, highly disingenuous, and highly reflective of the society that we find ourselves living in.

Rapaport knows this. Dr. Martin Luther King once said that an “Injustice anywhere is a threat to justice everywhere.”