John Mac Ghlionn
|
Posted: Apr 02, 2021 12:01 AM
Share   Tweet
The opinions expressed by columnists are their own and do not necessarily represent the views of Townhall.com. 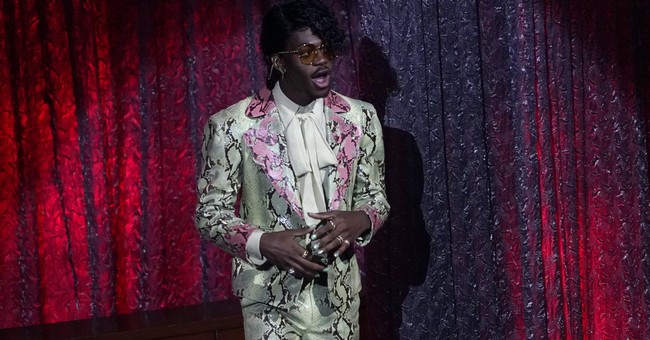 Are you familiar with the concept of contouring, the makeup technique that uses cosmetics to enhance facial features? If applied effectively, contouring has the potential to turn an average face into an aesthetically appealing one.

Contouring is really a consequence of the times. People feel pressured to look a certain way, and many respond by desperately attempting to make themselves appear more attractive than they really are. An individual who contours is compensating for perceived flaws.

Of course, the contouring effect is applicable to much more than human faces.

Montero Lamar Hill, more commonly referred to as Lil Nas X, recently released a song called Montero (Call Me By Your Name). In the video, the 21-year-old can be seen twerking on Satan. Why? Because he wanted to highlight the stigma faced by members of the LGBTQ community. A laudable goal, but surely he could have done this without giving the devil a lap dance? Considering most of his fan base comprises of impressionable teenagers, maybe there was a better way to convey the message of equality and acceptance?

The video is intentionally egregious. If Hill’s goal was to make headlines – which it clearly was – he certainly succeeded.

Of course, in the world of music, contouring is not a new phenomenon. – think Marilyn Manson, Rob Zombie, the early days of Lady Gaga in her meat dress.

However, the true greats of music, the likes of Chris Cornell, Springsteen, Whitney Houston, Alicia Keys, John Legend, Adele, Clapton, and Kendrick Lamar, never needed any gimmickry. Their voices, and their voices alone, were enough to catapult them into the stratosphere of greatness. They were (and still are) considered great because of their musical dexterity.

Today, however, dexterity counts for little. Cast your minds back to 2018, when Donald Glover, aka Childish Gambino, released This is America. It won a Grammy for record of the year.

Why? Was it for the lyrics?

No, it was for the video. In it, a shirtless Glover, armed with a gun, runs around shooting innocent people dead, all in an effort to highlight America’s problems with guns and white supremacy.

Without the visuals, the song would have barely registered with listeners. With the video, however, its significance as a form of art was grossly accentuated.

(I write this as a millennial, not as some sort of fossil longing for the days of chastity belts).

Which brings us back to Lil Nas X. Largely thanks to YouTube, the music industry has been radically transformed in the worst possible way imaginable. The quality of a song is judged by clicks, not by lyrics or instrumentation. If you listen to Montero minus the video, you will find yourself listening to a very average song. Forgettable in the extreme. Add the video, though, and the contouring effect kicks in.

This is the age of absurdity, where a song’s video matters more than its melody. Harmonies and lyrics, the bread and butter of songs, take a back seat to gratuity. If in doubt, please remember that WAP was the most popular song of 2020.

Some of the biggest names in music today are the likes of Lil Pump, Cardi B, and, of course, Lil Nas X. Average vocalists who rely on gimmickry to penetrate the market.

Lil Nas X is a product of his time. Laughably, just like how some commentators lauded WAP for furthering the feminist cause, some commentators are lauding Lil Nas X for championing the LGBTQ cause. Call me pessimistic, but the only causes Cardi B and Lil Nas X are championing are their own. The latter has just released his own line of Satan themed sneakers. Lil Nas X is an artist, but he’s also a businessman. With his latest song, he simply capitalized on the demands of today’s vapid, hollow market.