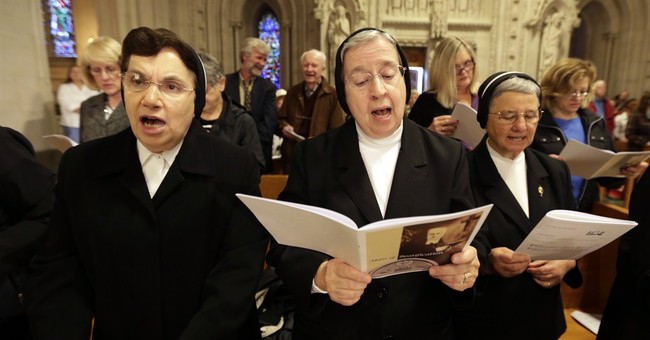 It was February 1993. I had been a Member of Congress for one month and noticed that a visit by someone from the Washington DC Presbytery was on my schedule.

I expected that they saw that I was a Presbyterian and were coming to acquaint me with the Presbyterian churches in the area. I was wrong.

Three ministers in clerical collars arrived. I welcomed them in to my new office and we sat around the coffee table.

The white-haired gentleman opened the conversation rather bluntly. He stated his name and said, “I am responsible for the Family Leave Act and Motor Voter.”

An African American lady identified herself and said, “I’m responsible for South Africa and apartheid.”

The elderly white lady gave me her name and told me what liberal issues she was responsible for but, frankly, I wasn’t listening.

I said, “And which of you is responsible for salvation?” They looked at each other, then me, then they abruptly rose, thanked me for seeing them and walked out the door.

I thought of that visit when I saw the story of the midterm election guide produced by the Sisters of Mercy of Silver Spring, Maryland. They have analyzed the coming election and have assembled instructions for voters to consider.

Their web site says that their “critical concerns” were Earth, Immigration, Nonviolence, Racism and Women. Salvation isn’t on their agenda either.

The Sisters of Mercy are referred to as “walking nuns” since they spend their time on the streets in communities rather than teaching in Catholic schools or isolated in prayer. You might say they are paid community organizers.

Their 16-page guide asks voters to base their votes on, among other things, how concerned the candidate is about the wealth gap, climate change, immigration reform and wasteful Pentagon spending.

The Conference of Catholic Bishops often instructs us on war and peace issues. I may have missed their pastoral advice on salvation, but I doubt it.

It is not only Catholics who assume wisdom over secular matters. The Protestant clergy weighs in regularly too.

Forty years ago I was campaigning for a seat in the Georgia House of Representatives. The Supreme Court ruling legalizing abortion was only months old and was a volatile issue. I was the guest at a coffee in a lady’s home when a Protestant minister told me that legalized abortion was the single most important issue in her life.

I suggested that since she had graduate training in helping the lesser schooled, such as me, find salvation I hoped her sights were set higher than on aborting babies. She said that she had expected she couldn’t support me when she received the invitation for the coffee and her instincts had now been proven correct. She left.

Those with exalted positions in a given field often come to believe that they are gifted in other areas. Barbra Streisand and Harry Belafonte are uniquely talented singers whom I have enjoyed listening to for 40 years. They don’t know as much about the climate as I do and I’m not interested in their amateur views.

Laura Ingraham summed up my thoughts perfectly in a book she wrote 8 years ago. The title of the book is Shut up and Sing.

I also couldn’t care less what Ben Affleck thinks about Islam. I wonder if he has any idea how many times the world has confronted Islamic jihad in the past 14 centuries.

I do not understand why one who has gained celebrity in religion or entertainment concludes that they should instruct the rest of us on political issues. I am even more confused by politicians who are in thrall to them.

During the high inflation of the 70’s and 80’s many farmers went deeply into debt to buy more land. As inflation was finally brought under control a lot of them, who were in over their heads, lost everything.

Several movies were produced about their plight and Congressional Democrats, wanting to show their solidarity with the farmers, held a hearing. Jessica Lange, Sissy Spacek and Jane Fonda, all of whom played the role of distressed farmer’s wives in those movies, testified before the House Democrats' farm task force on the emotional toll the financial stress took on those families.

It is easy to see how the American people can become cynical about politics when politicians are more interested in what celebrities think than their constituents. And their constituents are not role-playing. These matters affect their lives.