How Long Can President Biden Hide From Real News Conferences?

John Kass
|
Posted: Mar 11, 2021 12:01 AM
Share   Tweet
The opinions expressed by columnists are their own and do not necessarily represent the views of Townhall.com. 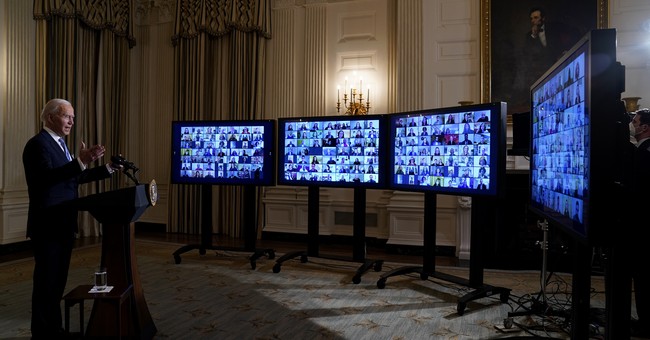 But it is avoidance. And the fact is, he should be having news conferences. And by news conferences, I don't mean questions he can ignore as he's led off the stage by first lady Jill Biden, holding his elbow to direct him if he turns the wrong way.

And I don't mean Biden reading from a teleprompter. He even has difficulty with that lately.

I mean a real honest-to-God news conference where Biden stands and answers hard questions about his policies:

Questions on China. On the Middle East. On the crisis at the southern U.S. border and the surge of immigrants entering the country illegally, including kids and teens, some of whom have been sent to a facility in Texas, which is renewing criticism of kids in cages -- a direct result of Biden's policies and campaign speeches advocating for opening the nation's doors.

White House mouthpieces won't call it a crisis. They call it a "challenge." But it's a crisis of his own making and they know it.

And there are questions he should be answering on the $1.9 trillion Democratic spending spree that has little to do with COVID-19 relief but everything to do with bailing out historically poorly run blue states such as Illinois, New York and California with help from well-run red states.

Or answering questions about his environment czar, John Kerry, who arrogantly told thousands of workers who lost their jobs due to the Keystone pipeline cancellation that they could find jobs making solar panels.

Mr. President, are you more concerned about the women accusing New York Gov. Andrew Cuomo of improper sexual advances than you are about Cuomo's nursing home policy that seems to have sent thousands of seniors to their deaths?

And questions about his son's business relationship with China. How is Hunter these days, Mr. President

Perhaps someone will ask, "Are 'Neanderthals' the new 'deplorables?' "

These questions wouldn't be shouted at Biden in angry, accusatory tones. He's not Trump. They loathed Trump. And Trump loathed them.

But at least Trump stood there many, many times, took questions and brawled with reporters. And Biden? He's nowhere man.

Many of the Beltway media are Democrats and support Biden's policies. They covered for him during the campaign as he hid in the basement. Yet even the friendlies are now restless. And they'll have to look in the mirror and ask themselves:

With Trump gone, are they ready to become journalists again? Or are they content to be political operatives?

According to a study by presidential scholar Martha Kumar, at this point in their terms, Presidents Trump and George H.W. Bush had held five news conferences. President Bill Clinton had four. George W. Bush had three. And Ronald Reagan held one.

But Biden? They don't dare. Not yet. What would happen to the stock market?

Here's more on that "Hide Biden" strategy characterized by The Associated Press in a story circulated around the country: "It reflects a White House media strategy meant both to reserve major media set pieces for the celebration of a legislative victory and to limit unforced errors from a historically gaffe-prone politician."

Yet even those carefully stage-managed "set pieces" his White House handlers have organized for him have been rocky at best. Earlier in the week, to honor the promotion of two women generals to high command, the president couldn't remember the name of Defense Secretary Lloyd Austin. Or where Austin worked.

"And I want to thank the sec -- the, the, ah, former general. I keep calling him general, but my, my -- the guy who runs the outfit over there," Biden said.

Over there Mr. President? You mean the Pentagon?

During another recent staged appearance at a House Democratic event, where he was joined on video by House Speaker Nancy Pelosi, the president offered to take questions from reporters.

"And I'm happy to take questions if that's what you -- I'm supposed to do, Nance," said the president. "Whatever you want me to do.

Before reporters could get a question out, Biden's video feed was shut down, with only this message: "Thank you for joining."

The president has been in politics for more than 50 years, and even if he gets lost off script, he can repurpose old habits for a while, old pantomimes, that are like muscle memory to him.

And I bet some reading this think I'm mocking the man, that I have no feelings. That this is related to a speech issue.

The world doesn't care about our feelings. The world isn't Oprah.

As questions about Biden avoiding news conferences began to bubble up, the liberal news site Politico published a gushing account of how Vice President Kamala Harris was being prepared to deal with foreign leaders under the headline," Harris gets a crash course on foreign policy."

Buried deep in the story was this: "A European ambassador put it bluntly: 'She will be seen by everyone as a potential president in waiting,' the ambassador said. 'Much more than in previous presidencies.'"

President Biden might remember that the great heavyweight champion Joe Louis said, "You can run, but you can't hide."

The president may run from reporters. But he can't hide forever.