John Kass
|
Posted: Feb 04, 2021 12:01 AM
Share   Tweet
The opinions expressed by columnists are their own and do not necessarily represent the views of Townhall.com. 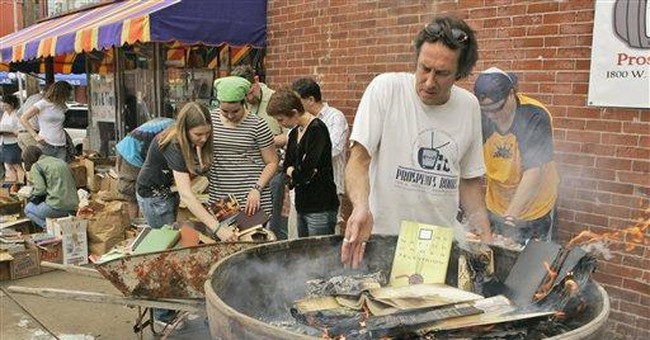 When I was a boy about 11, I committed a crime that changed my life.

I stole a book. I was a book thief.

I found it in another kid's desk and began reading, hiding it behind some boring textbook, and couldn't give it up.

And when the last bell rang, I hid it furtively under my jacket as if it were some rare, precious and struggling bird, and walked home.

It's still with me. I'll never give it up.

That book that opened up the world to me.

"Odysseus the Wanderer," written for children by the classicist Aubrey de Selincourt.

It is a version of the "Odyssey" of Homer, the greatest adventure story ever told. I've since read several translations of Homer's "Iliad" and "Odyssey."

The crafty Odysseus, the man of wrath, was an expert trickster. He duped the Trojans with his Trojan horse, befuddled the man-eating Cyclops and withstood the deadly song of the sirens.

Though he was clearly pre-Christian, I considered the wandering King of Ithaca as a patron saint. There was no trap he couldn't escape with his wits. His story has shaped Western literature -- as well as "Star Trek" -- for some 3,000 years.

But there is one thing Odysseus may not be able to withstand:

The political left and the growing #disrupttexts movement -- fueled by critical race theory -- in American public schools wants him gone.

Classic Western literature, from Homer to Shakespeare, Mark Twain and even Harper Lee, is now being canceled, much in the same way that the Islamic State group and early Christians destroyed ancient statues that offended them.

There is something quite barbarous about it all.

Just a few days ago, zealots in San Francisco began stripping "offensive names" from public schools. Names such as George Washington, Abraham Lincoln and even Democratic U.S. Sen. Diane Feinstein, who is a living witness to her own cancellation.

The stripping of names are public events. They pit aging, worried traditional liberals against a radical leftist movement that will devour them as surely as the relentless Bolsheviks devoured the more moderate Mensheviks.

But the purging of great literature often takes place quietly, among woke teachers and librarians. If the classics aren't exactly banned outright or burned, they have another way:

To place offending literature on the back shelf, out of the reach of the young, where they're lost to gather dust in the shadows.

"Challenging old classics is the literary equivalent of replacing statues of racist figures," she writes.

"... exposing young people to stories in which racism, sexism, ableism, anti-Semitism, and other forms of hate are the norm may sow seeds of bias that can grow into indifference or prejudice."

And so, the astounding complexity of great literature and great writers is now reduced, as are so many things these days, to angry zealotry and political correctness.

Shakespeare's glaring sin is his anti-Semitic treatment of Jews in the "Merchant of Venice." But isn't there value in his other works? Do I really have to ask that?

Harper Lee's sin is creating hero Atticus Finch, the white liberal savior of a Black man wrongly accused. And what is the blind poet Homer's outrage? He didn't think of himself as belonging to the West, the way we think of the West.

But when Odysseus enters the underworld and meets the vain and deadly killer Achilles, Odysseus is told this:

"I would rather be a slave of a landless barbarian than king of all the dead."

A #disrupttexts leader, Lorena German, author of "The Anti-Racist Teacher," explains her purge this way:

"So, let us be honest, the conversation really isn't about universality ... This is about an ingrained and internalized elevation of Shakespeare in a way that excludes other voices. This is about white supremacy and colonization."

If the new test for all literature, movies, statues -- anything of historic value we consume -- is 100 percent purity, all will fail. And who would grade the test?

When I was young, there were no books that couldn't be read. To deny classic literature was to brand yourself a barbarian.

But now those narrow minds deciding what books children will read are the dictators of the new "tolerant" culture. There is nothing delicious in the irony.

There is great value in diverse characters the young can identify with. I'm not arguing with that. Even Homer understood the multicultural world.

What's irksome is the way offered, as ideological catechism to politically shape the minds of the young. If it meant more kids picking up books and reading, I might understand.

But kids aren't stupid. They're not easily led farm animals, despite what the new Napoleons believe.

If children associate literature with didactic political indoctrination, whether from right or left, the smart ones will put up a wall and shut down.

And they won't develop the necessary skills of logic and critical thinking needed to grasp and wrestle with the great conflicting ideas offered in classic Western literature.

Perhaps that's the real plan. Who needs to develop critical thinking when the great books are gone?

Politics is always downstream of culture. And I'm just glad I stole that book when I could.

When books weren't placed on the back shelf, out of the reach of a child.