John Kass
|
Posted: Dec 23, 2020 12:01 AM
Share   Tweet
The opinions expressed by columnists are their own and do not necessarily represent the views of Townhall.com. 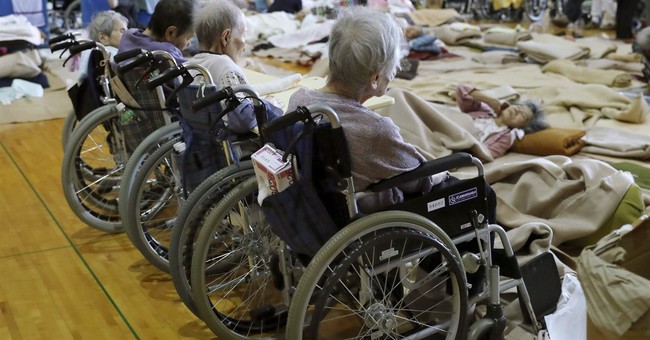 My mother is 90 years old, one of the elderly isolated in nursing homes, unable to hug and kiss her children, alone because of the pandemic.

And this will be our first Christmas apart.

She lived with us for 25 years. But after her stroke, she'd forget to take her medication. And when she entered the nursing home in March, we thought we would be able to see her and take her home for visits.

But the COVID lockdowns came immediately. I haven't given her a hug or a kiss since then.

I know we're not alone. There are people all over the world who wish they could touch and hug the ones they love. And many have lost their parents to COVID in nursing homes.

"But here, we don't talk about missing everyone so much," she told me last week. "Our thoughts are with our children and grandchildren. Whining and crying just won't do. You just don't mention it because others might feel sad.

"We just walk around the halls with our walkers, we talk about the weather, the food, but we don't discuss what we miss outside," she said. "I suppose prison inmates are like this.

"I look at the whole picture, how it's been difficult, yes, but how we're accepting, how everyone is accepting it, to reach the goal."

She isn't a little old Greek Yia-Yia with an accent. Yes, she speaks fluent Greek, but she was born and raised in the small Canadian town of Guelph, Ontario, where she developed her stiff upper lip and her love of English literature.

When my brothers and I were young, she taught us the poem "In Flanders Fields" by Col. John McCrae, a son of Guelph, who served in the Canadian Army during World War I. She taught us to sing "God Save the Queen," for Queen Elizabeth.

As a child of the Depression, she hunted for coal on the train tracks. Her family had a small farm on the edge of town. Later, my grandfather went off to war.

He'd fought in World War I. And in his 40s, he demanded to join his old regiment for World War II. Somehow, they let him in. Papou Pete, my grandfather, was a forceful man.

As a girl, my mom worked the farm and weeded the onion patch. Her younger brother, Uncle George, milked the cows and goats before school. They'd help my grandmother make yogurt and feta cheese, packing the feta in barrels and taking them to the train station on a truck pulled by Marco the farm horse. Yia-Yia Katina, my grandmother, would ship her feta cheese as far as California and Vancouver.

"We should have stayed in the cheese business," my mother said. "Think about it. The Americani love feta now. And finally, they've discovered good yogurt."

As a girl, she listened to Churchill on the radio.

"I remember that voice," she said. "Churchill's voice, a strong voice. There was no namby-pamby about the man. We were at war. And he was Churchill."

Today's culture talks and talks about feelings. Everything is so gushingly emotional, and many are constantly full of outrage and angry tears.

But not her generation. The Depression and the war honed them, and later came the communists and the Missiles of October. They'd been tempered.

"And don't forget about China!" she said. "Papou Pete always warned about China."

I think I became a writer because she fostered it in me. She'd tell such vivid stories. One was about former heavyweight champion Joe Louis, so down on his luck he was reduced to boxing a drugged bear in a dirt boxing ring at some county fair.

And stories about vendettas in the old country in the mountains. And one of a midnight elopement and angry men with guns, lanterns and dogs hunting for the young couple, who'd hidden themselves in a mountaintop chapel.

It's good for her to retell them, to remember. And so I asked about one of her favorites: Papou Pete and the peanut wagon.

"What do you mean, peanut wagon?" she said.

Mom? You know the story about Papou's peanut wagon. Tell me.

He'd lost his restaurant in the Depression and went on relief for one day but hated taking charity. He came home with a ridiculous peanut wagon, and Yia-Yia Katina began to cry because she was ashamed the downtown businessman was reduced to a pushcart.

Mom, do you remember?

"I don't remember. A pushcart?" There was silence on the phone on Friday, and we were both lost in the darkness of it.

But after a minute, she said: "Oh yes, I remember. The peanut wagon was painted white."

Wasn't it a red wagon?

"No, it was white, I tell you," she said. "Four walls of glass, I see it now. And there was a place to keep lighted pieces of coal under a metal pot, to warm the peanuts, popcorn and chestnuts. We needed the money.

"He pushed his wagon into Exhibition Park. And there was a river where people would skate when it was frozen. What was the name of it? I've forgotten my own damn river."

"Yes! The River Speed. And when he came home that first night, he pulled piles and piles of dimes, nickels and quarters on the table. Yia-Yia was stunned. We were all stunned. We rolled all the coins up in bank paper.

"We were so close, and we were happy," she said. "We were all crying. We were together. We were crying and the tears came, and we held each other so tight, so tight.