Come Hell or High Water, if There's War With Iran, Trump Is Done

John Kass
|
Posted: Jan 09, 2020 12:01 AM
Share   Tweet
The opinions expressed by columnists are their own and do not necessarily represent the views of Townhall.com. 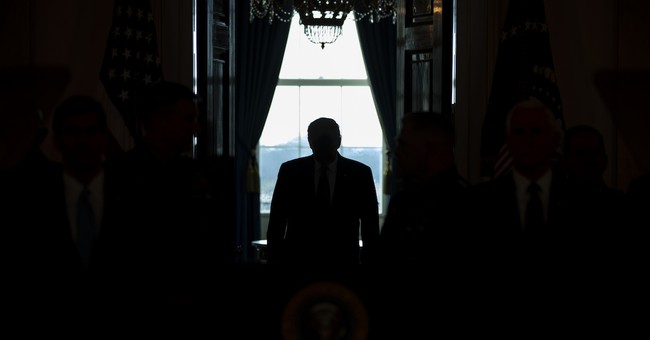 One of two things will cost President Donald Trump his re-election: a recession or a war with Iran.

The economy, so far, is thrumming along. But Trump's decision to kill Iranian Maj. Gen. Qassem Soleimani, the murderous architect of Iran's expansion into Iraq and Syria, a truly evil man with the blood of hundreds of Americans on his hands, may very well have put us on the path to war with Iran.

On Tuesday evening, Iran launched more than a dozen missiles at two bases in Iraq hosting U.S. troops. Trump has said he would respond to such attacks, the only question is how.

The never-Trumpers, the stalwarts of the pro-war wing of the Bush Washington Republican establishment, loathe Trump. They supported America's disastrous, never-ending wars in Iraq and Afghanistan.

They sold us on the invasion of Iraq by shrieking about all those weapons of mass destruction that were never found.

Now they sing Trump's praises for his killing of Soleimani. Trump voters hear them sing their song, and they worry.

For the pro-war Republican establishment wants an end to the Iranian regime, come hell or high water. It sees a nuclear Iran as an existential threat, to Israel and to the entire Middle East.

"If they hit us again, I would not want to be working in an Iranian oil field," Graham said, "because I think the president is determined to bring this regime to its knees if they continue to be provocative."

Graham doesn't have to worry about dodging bullets. Neither do I, sitting comfortably while typing.

But isn't this how wars begin? Slowly, then all at once.

Republicans say war with Iran won't happen. Democrats are busy selling fear because fear is all they have left, and they insist that it might. These are politicians, meaning they have double-jointed spines.

American voters aren't as supple. Americans vote their bank accounts. The economy is doing spectacularly well for many. But if it fades and goes south in a recession, Trump will lose independent voters and the election.

And what of Trump's base? They're the forgotten, the people mocked by the Washington elites and Washington media as "deplorables." They're loyal now, yes, but they don't want another war in the Middle East.

They've had enough of wars. And he'd lose them if another war begins. Iran must surely know this and fold that into its calculations.

In 2016, Trump assumed control of the Republican Party by taking the same anti-Bush path as Sen. Rand Paul, the Kentucky Republican and non-interventionist.

Trump campaigned against those endless Middle East wars. The Republican Bush pro-war wing, the never-Trumpers, never forgave him. Yet now, with Soleimani dead, they praise him.

Americans can handle the killing of Soleimani. Especially the loved ones of those who lost their legs or arms or lives to Soleimani's IEDs.

What Americans don't want is war, troops on the ground, and that is where Trump is being led.

As I was writing this, a father of an American combat soldier who served in Afghanistan called me.

"This is a game changer. Trump is taking out their leaders. We don't mind that," he told me. "You go after the decision-makers who orchestrate or sponsor violence and terror from a safe distance. It changes the dynamic. What I do mind is our own guys' boots on the ground. We don't want another war."

One rule of politics is that all politicians lie. But if you lie to your base, and they know it, you're lost.

Think back to the 2016 campaign, with Trump fighting it out with the Bush family, condemning their wars in Iraq and Afghanistan as wasteful of American blood and American treasure.

A movie was out in theaters, "Hell or High Water," released in 2016, a modern Western film about bank robber brothers played by Chris Pine and Ben Foster, and a Texas Ranger -- Jeff Bridges -- who tracks them down.

It was a fine film. There was a line in the movie that explained the Trump base in that 2016 election. And it holds the key to his 2020 re-election campaign.

It was painfully true then and it is now. It wasn't dialogue. It was graffiti, scrawled in blood-red paint on a sun-bleached wall in a hot, dusty, dying town, a desperate cry of the forgotten:

"Three tours in Iraq and no bailouts for people like us."

It was a highly political movie that didn't mention politics, a story of archetypes, of "deplorables" in flyover country, the part of red-state America that the media and political elites don't care all that much about, except when the people are to be used as props.

The bank robber brothers in the movie are fictional, but their America is real, the America of the forgotten, the people who play by the rules and went to war themselves, and sent their sons and daughters to war when their country asked it of them.

Now they're done with wars.

If this spins out of control, Democrats who hate Trump and the establishment Bush Republicans who now praise him will have accomplished their goal:

The end of Trump.