'A Day Without Republicans': A Film for Blue State Taxpayers

John Kass
|
Posted: Oct 25, 2019 12:01 AM
Share   Tweet
The opinions expressed by columnists are their own and do not necessarily represent the views of Townhall.com. 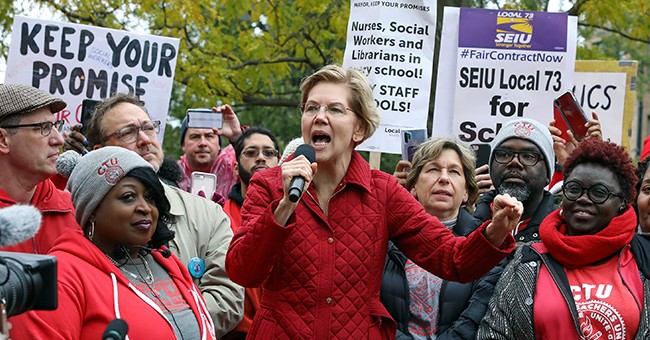 Sen. Elizabeth Warren swooped into Chicago from that economic fantasy planet of the democratic socialists -- the strange world where math is all about feelings -- to tell the striking teachers union she stands with them. Because of the children.

Economic conservatives, including conservative Republicans and that handful of moderate Democrats who are still breathing, just can't live on that planet. They can't breathe. The environment is too taxpayer toxic.

But if you'd like to see what America would look like without Republicans, in a place under absolute Democratic control, where the left demands more and more from taxpayers, with no pushback from the conservative side of the aisle, then look to the city by the lake.

Look to Chicago and see the future.

It could be a movie: "A Day Without a Republican."

"I'm here to stand with Chicago teachers," Warren, in red, told the crowd of striking Chicago Teachers Union members, also in red. "I'm here to stand with every one of the people who stand for our children every day. Everyone in America should support you in this strike, and the reason is because when you go out and fight, you don't just fight for yourselves -- you fight for the children of this city and the children of this country."

It's always for the children, isn't it? That dominates the news narrative, not the politics. And it's not about the power over a politicized school bureaucracy system that, for generations, has treated the mostly minority and low-income student population as cash cows, with many students unprepared for college or jobs. Oh, no. It's not the power. It's all for the children. And taxpayers who pay for it? Whom do they vote for?

The militant hard-left Chicago Teachers Union leadership has rejected a more than generous 16 percent to 24 percent pay raise and is now dictating education politics in a dark blue Democratic town, rhetorically bludgeoning progressive Mayor Lori Lightfoot. They devour her and descend on City Hall. And still, they want more from taxpayers.

Democrats campaigning for president, like Warren; and Bernie Sanders a few days ago; Joe Biden, the so-called center-left candidate; and others rush to signal support to the CTU. Because of the children?

This past summer, a delegation of CTU members visited the socialist paradise of Venezuela. They thought it was wonderful and stood strong with their hero, dictator Nicolas Maduro, whose people starve, but not the Venezuelan ruling class. Any day now I expect Nick the Well-Fed to show up in Chicago and join with his loving Maduroistas, and say, "It's for the children." Because it's for the children. No?

It could only happen when there is no pushback.

There is nothing outrageous about workers seeking better pay and better working conditions or applying pressure to their employers for the means to a better life for them and their families. Private-sector employees -- steelworkers, plumbers, carpenters -- do just that. But there is legitimate pushback from employers on unreasonable demands.

Not all the demands of the CTU are unreasonable, including nurses and librarians in schools. But the CTU represents public employers, paid not by politicians, but by taxpayers.

And in the blue states, in Illinois, New York, New Jersey, California and Connecticut, who pushes back on behalf of taxpayers? All these states had big-government Republicans, the go-along-get-along kind. And now those states are bleeding middle-class taxpayers, who flee.

Taxpayers understand, even if news analysts pretend not to fathom it. Ruling Democrats don't mind, because those angry taxpayers tend to be annoying and vote Republican.

Ultimately, who remains? Those who can't leave, until the system itself is devoured like those zoo animals in Venezuela, eaten by the people after they ran out of toilet paper and money.

The important yet under-told story in America is that politics does abhor a vacuum, and taxpayers get sucked out of the blue states, to be deposited in more tax-friendly states, like Florida, Texas, Indiana, Tennessee. And the children? They take them with them, if they can.

This is all quite ripe for satire. But satire is a dangerous tool in these supremely tribal political times. Good satire cuts deeply, and those with power in the blue states who drive taxpayers out will not be mocked.

Yet there was some delicious satire back in 2004. It was safe then, as now, to mock conservatives worried about unfettered illegal immigration. And filmmaker Sergio Arau released his devilishly brilliant mockumentary, "A Day Without a Mexican."

In the film, Californians woke up one day to find that one-third of the state's population had vanished. A mysterious fog surrounded the state and California was cut off from all communication. Without Mexican workers to cook the food, to cut the lawns, to do the hard work others wouldn't do on low wages, the state ground to a halt.

Some think California is grinding to a halt right now, with taxpayers fleeing amid all those rolling power blackouts. But there and in the other tax-heavy blue states, where the go-along-get-along Republicans have finally been crushed, there is a growing realization among ruling Democrats.

Political fantasy worlds might demand math have feelings, too, but political dominance has a price. How can you pay the bills without taxpayers to bleed?

They'll never make a mockumentary called "A Day Without a Republican." It makes no economic sense. In blue states like New York, California and Illinois, who'd be left to pay for a ticket?