The Silence of Pope Francis and the Pain of a Church

John Kass
|
Posted: Aug 30, 2018 12:01 AM
Share   Tweet
The opinions expressed by columnists are their own and do not necessarily represent the views of Townhall.com. 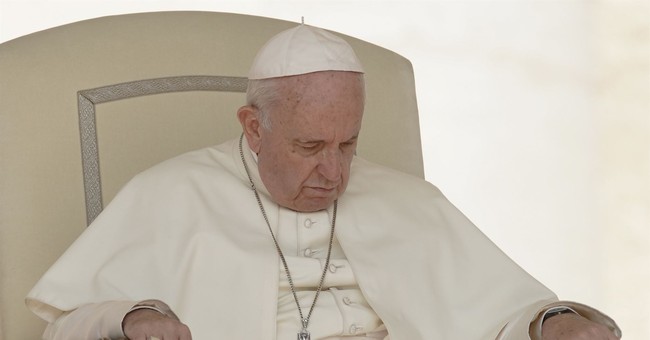 As Roman Catholic bishops tear at each other, as Pope Francis refuses comment even while standing accused of covering up sexual abuse, I thought of a Bible story.

The publican and the Pharisee.

One of my favorites, it tells of a humble man, terrified of God's judgment, begging for mercy. And it tells of another man, proud, his head high, satisfied with himself and all his good works.

It might be a good time for some to read it again as the Catholic Church roils in another chapter of the never-ending scandal of sexual abuse by clergy.

The focus of the latest drama is who knew what about young men being preyed upon in seminaries by their bishops and about more cover-ups of sexual abuse by priests of children, many of them pubescent boys.

The hearts of the faithful aren't broken as much as they are torn. A torn heart makes no sound and the body dies in silence.

And through this Pope Francis -- revered as a humble and good man -- also remains silent. His silence is devastating.

Vigano called on the pope to resign, alleging that in 2013, Francis knew of disgraced former Cardinal Theodore McCarrick's sexual predation of young men in the seminary.

The pope said nothing in response to Vigano's allegation.

"I must tell you sincerely that, I must say this, to you and all those who are interested: Read the statement carefully and make your own judgment. I will not say a single word on this," Pope Francis said.

Is it that he really has nothing to say? Or is it that he can't say anything without knowing what other information Vigano may possess?

Vigano represents the conservative wing of the church. Pope Francis represents the liberal wing, and his allies have cast this as a political fight. It is obvious that Vigano timed the release of his letter to damage the pope.

But his claims should be investigated, publicly.

"He won't say a word? Then I won't give a dime. I'm through," said a friend of mine, a devout Chicago Irish Catholic who has spent his life donating heavily to two institutions: the Democratic Party and the Catholic Church.

"But I would still like to send the church something," he said. "A movie they should watch: 'Spotlight.' They should see it again."

"Spotlight," which won the Academy Award for best picture in 2016, is the account of The Boston Globe's heroic uncovering of sexual abuse committed by hundreds of priests over decades, and how the assaults were covered up by bishops.

Just a few weeks ago, a grand jury in Pennsylvania listed 300 Catholic priests who allegedly abused more than a thousand Catholic schoolchildren, the priests protected by their superiors and sent to other parishes across the country.

In July, the politically influential McCarrick, the former archbishop of Washington, resigned from the College of Cardinals amid other allegations reported on by The New York Times and other news outlets. The allegations were that for decades, McCarrick had preyed upon young men in the seminary, and that church hierarchs knew about it for years and were silent.

Vigano contended that McCarrick and others were quietly exiled by former Pope Benedict. And later they were brought back to power by Pope Francis, and that they helped elevate others, including Chicago Cardinal Blase Cupich.

Cupich said he knew nothing about the allegations against McCarrick. He told NBC 5's Mary Ann Ahern that Francis' critics oppose him because he's Latino.

"The pope has a bigger agenda," Cupich told Ahern. "He's got to get on with other things, of talking about the environment and protecting migrants and carrying on the work of the church. We're not going to go down a rabbit hole on this."

A rabbit hole? You mean, like some crazy conspiracy theory?

But the decline in church attendance and fundraising, and the pain parents feel when meeting a priest and wondering if their children will be safe with him isn't some conspiracy theory.

It is pain experienced not only by Roman Catholics, but also by people of all denominations and faiths, Christians and non-Christians alike, in their own communities of worship.

Ultimately this is all about pride and power. Most clergy use their authority for good. But others use it to feed their appetites or to silently cover things up.

And all of it pushes families away from organized religion. Atheists, who put their faith in government, would applaud. Still others argue that we are all sinners, and that true faith is never dependent upon the acts of imperfect men.

But there is a real need for family religious observance in a world like ours, a world that brutalizes us and our children. And sex abuse scandals like these drive families away from their faith.

The powerful who protect the predators are proud. Some even extend their hands to be kissed.

The frightened tax collector at the rear of the temple begged forgiveness for sin, even as the proud Pharisee ticked off all the good deeds he'd done.

The terrified publican didn't offer his hand for anyone to kiss. All he said was this, over and over again: