Will Hillary Explain Her Dream of 'Open Borders'?

John Kass
|
Posted: Oct 14, 2016 12:01 AM
Share   Tweet
The opinions expressed by columnists are their own and do not necessarily represent the views of Townhall.com. 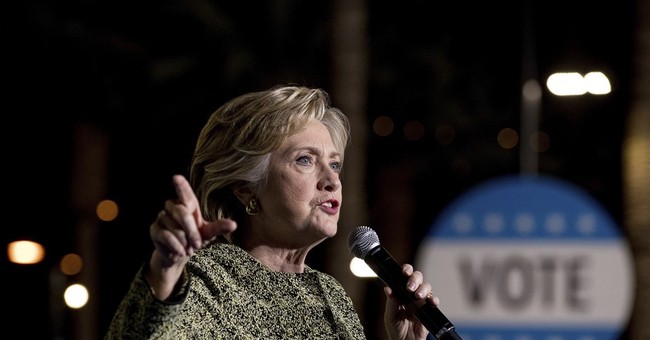 Just as America was tossed -- or did we eagerly jump? -- into the sexual political gutter with Bill and Hillary and Donald, there was other news breaking.

At least I thought it was news. But I must warn you: Sex and sexual politics has nothing to do with it.

It's Hillary Clinton's dream of an America without borders, as expressed to investors of a Brazilian bank, in comments leaked by WikiLeaks.

An America without borders, Hillary? How positively George Soros of you, Madam Secretary.

"My dream is a hemispheric common market, with open trade and open borders, sometime in the future with energy that's as green and sustainable as we can get it, powering growth and opportunity for every person in the hemisphere," Clinton reportedly said to investors in a paid speech she gave to Brazilian Banco Itau in 2013.

Clinton's dream also includes a Western Hemispheric common market, like the European common market that is dissolving in chaos, fear and debt.

If that is indeed her dream, then she dreams the internationalist dream that would end America. But Americans aren't talking about this, perhaps because there is no video involving sex and Hollywood and Trump.

I would love to hear Clinton's explanation. Perhaps she could put it in some proper context.

Or perhaps she was merely telling the Brazilians something they wanted to hear, because they were paying her a good chunk of cash.

And if there is a way for America to maintain sovereignty without borders, Hillary might be just the one to tell us. But the Clinton campaign isn't commenting. And reporters aren't really pressing, preoccupied as they are by that vulgar video of a boorish Trump.

Mook said she meant open borders in the context of green energy for all.

Cool. But then what about her dreams of the hemispheric common market and all the people traveling to and fro across the Western Hemisphere?

So I'd like to hear Hillary Clinton tell it.

The way to deal with this would be for Clinton to release the transcripts of all her well-paid speeches, the ones to Wall Street and the one about border dreams to Banco Itau. That's what Bernie Sanders wanted.

But that's not happening, just like Donald Trump isn't releasing his tax returns.

So the Clintonistas are blaming the Russians for the hacking.

It might also be true that if a hacker could hack into Clinton campaign emails, then a hacker might also have hacked into top secret emails she kept on her home brew server in violation of federal law when she was secretary of state.

But I won't say anything, lest I be denounced as a Russian spy.

That WikiLeaks information was available just before the last Clinton-Trump debate. The moderators could have asked a question about it, but they chose not to.

They did ask about another drop from WikiLeaks, that of Clinton's belief in holding one public position on policy for the public and another for private consideration by insiders.

Kind of like when she was secretary of state and telling America that the four dead Americans in Benghazi were killed by protesters angry about some video. And then telling her daughter and others, in private emails, that the four were killed in a terrorist attack.

In the debate, Clinton was asked if an official holding a private and a public position could be considered "two-faced."

She said Abraham Lincoln did it. In a movie.

And now, rather than worry about divisive issues such as borders, we're consumed by that vulgar Trump video.

Yet back when the Clintons held the White House, back when Bill used the cigar on that intern in the Oval Office, the political left protected him. And they defended Hillary for defending Bill, who had a habit of putting his hands on women when he held office.

And so, after a brief bout of impeachment interruptus, the American political establishment welcomed Bill and Hillary back into the establishment fold, where wealth and near absolute power awaited them.

What's laughable about all this is the Clintonista argument that to cleanse America of the stain of Trump, we must re-install Hillary and Bill back into the same White House that they soiled years ago.

I get all that.

Trump is a boor and Bill Clinton is a boor and Hillary is Hillary -- either a loyal spouse or a cunning enabler. And politics is politics, so you'll hate the one or forgive the other based on your preferences, or shout a pox upon them all.

But having an America with or without borders is also rather important, no?

And someone running for president might want to explain it all, in the proper context of course.

An America without borders? That's not a dream, that's a nightmare.

Ask the Europeans. They know.