John Kass
|
Posted: Apr 08, 2016 12:01 AM
Share   Tweet
The opinions expressed by columnists are their own and do not necessarily represent the views of Townhall.com. 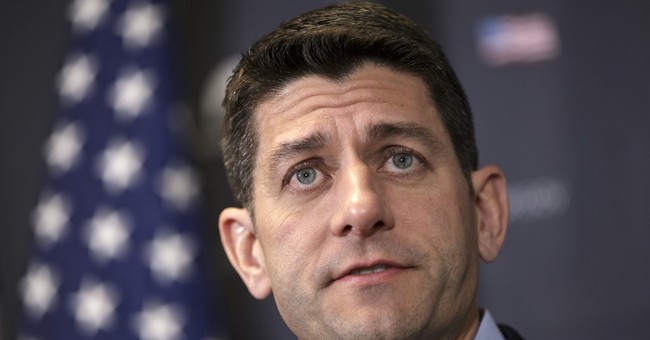 The Paul Ryan for President thing keeps haunting conservative dreams because the GOP establishment won't pin it to a coffin with a wooden stake.

They won't wrap a wreath of garlic around its neck. They will not burn it with fire and sulfur. So by not killing it, they give it life, as they whisper, whisper, whisper.

And so it breathes, this Ryan Nosferatu, wandering out there in the dim political half light where operatives do their work.

Ryan, the speaker of the U.S. House, says he does not want to be the Republican nominee for president, but he also refuses to categorically rule it out. It's a game.

So would the establishment like to bring Ryan into the sunshine of Cleveland this summer, so that he may be their knight and save them the depredations of the barbarian and the wrath of the conservative Texan?

It's a theory. Only that. But if the Republican establishment had a choice, they'd cling to Ryan since he's one of their own. Establishments don't die easily and the way this political year has gone, you'll see the establishment scorch the earth before they give up.

Ryan is no conservative, though he plays one on TV. He's a kinda-sorta conservative, the type the GOP establishment loves. He's one of those kinda conservatives who can talk to real conservatives the way anthropologists talked to aboriginal tribesmen in old adventure movies, with patience, hope and the arrogant conceit of the elites.

But he's also the kind of politician who goes along with raising the federal debt ceiling and feeding the federal leviathan, and those aren't remotely conservative positions.

Yet as the GOP nominee, win or lose in November, Ryan would allow the establishment to keep hold of what is important: their access and power in Washington. That's the game, either winning or not losing by losing with the right guy. They're experts at this, just as the mincing courtiers of Louis XVI must have been experts at the minuet of power just before the peasants got wise.

The Republican establishment fears and hates billionaire New York businessman Donald Trump, the vulgarian who leads a growing American nationalism and doesn't need their money. His great sin was to damn them for making war in Iraq. And for that -- not his comments about Megyn Kelly or Heidi Cruz -- they will never forgive him.

They loathe Texas Sen. Ted Cruz, too, though he soothes them somewhat by promising to make the sands glow in the Middle East. But he horrifies them for naming them publicly as liars and members of what he calls "the corrupt Washington cartel," which includes his own Republican leadership.

Neither man is acceptable to them. Millions have been spent to make Cruz toxic and Trump downright poisonous.

Yes, they did momentarily support Cruz -- using him to stop Trump in Wisconsin, and preventing the Donald from having a clear path to the necessary 1,237 delegates he'd need to avoid a brokered convention in Cleveland.

Now that a brokered convention is all but assured, the search is on for a fresh face.

Those exact words, "fresh" and "face," came out of the mouth of GOP establishment mouthpiece Karl Rove as if by accident. And since then, the whispers about Ryan haven't stopped.

Like my own, Rove's face isn't exceptionally fresh. Mine is somewhat like a side of beef with a broken nose stuck in the middle. But Rove's is rather like a boneless Krakus ham -- the salty kind that comes in a can from Poland -- set in all its pinkness on a white tablecloth where it dispenses establishment wisdom.

So on the conservative "Hugh Hewitt Show" on the Salem Radio Network, the ham talked about the negatives of the two front-runners and the appeal a "fresh face" might offer if that face was deemed conservative enough.

"And a fresh face might be the thing that could give us a chance to turn this election and win in November against Hillary."

Would Cruz's conservatives revolt? Yes. Would Trump's economic nationalists revolt? Yes. But the establishment would dangle the specter of Hillary Clinton selecting two or three Supreme Court justices, and appeal to Republican unity. All the bosses would have to do is change the convention rules. And they're the ones who make the rules.

Hillary Clinton isn't inevitable, and the FBI seems to be closing in on her email scandal, while socialist Bernie Sanders has the momentum as the presidential campaigns move to New York. Sanders' momentum and appeal to young voters are why the pro-Hillary crowd is trying so desperately to shame him now.

"No, I'm not that fresh face," Ryan told Hewitt. "I'm not that person. (Laughing.) I'd like to think my face is somewhat fresh, but I'm not for this conversation. I think you need to run for president if you're going to be president, and I'm not running for president. So period, end of story."

You think your face is somewhat fresh?