John Kass
|
Posted: Jan 12, 2016 11:17 AM
Share   Tweet
The opinions expressed by columnists are their own and do not necessarily represent the views of Townhall.com. 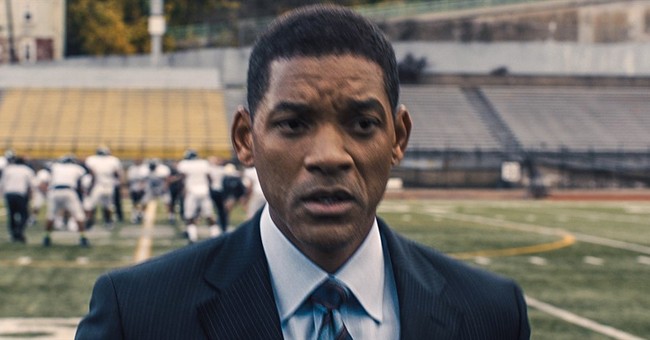 The NFL playoffs will be on TV in millions of American homes this weekend, and the games begin.

Mom and dad in their jerseys, kids in their team gear, snacks on the coffee table, beer in the fridge, everybody reaching for something, the eyes of the family eager for impact, a truly American scene.

Advertisers and marketers can't ask for anything better than that.

Norman Rockwell would paint it, wouldn't he, the American family and football, if he were around this year with all that drama on our screens and gridiron gambling on our phones?

But would Rockwell paint a boy's brain inside a helmet -- floating like a poached pear in a jar of water -- shaken and slammed against the glass again and again and again?

Because that's football: A beautiful and violent combat, the human body as a weapon, a game in which one man expresses his will on another man.

And heads get in the way. That's the thing. There's no way of ignoring it. The heads are smashed by design.

The problem is that you can't sell trucks or beer to dad if he's got his son's scrambled brains on his mind. You can't sell mom on buying more gear for the multigenerational NFL family -- you know, that NFL Hallmark card with grandpa in his Bears jersey, and the evil son-in-law wearing Packers' green and gold -- if she is thinking about taking her boy to the hospital for concussion therapy.

So the release of the movie "Concussion" about the groundbreaking work on chronic traumatic encephalopathy (CTE) causes ethical problems, doesn't it?

It causes problems for those parents who love football, but who also love the brains of their sons who play the game.

If you're a parent of a child who wants to play football, and you avoid the movie "Concussion" the way the NFL wants you to avoid it, then you're avoiding reality.

And some day, and I hope this doesn't happen but it might, you'll look at yourself in a mirror and see a stranger there, looking back at you.

I watched "Concussion" the other day, and it upset me.

Is it a perfect movie? No. Are some details fudged in Hollywood fashion as science and corporate greed are condensed into a story? Yes.

But Will Smith does a good job portraying Dr. Bennet Omalu, a former Pittsburgh medical examiner whose groundbreaking work on concussions has led us to this.

And brain damage, and the suicides of great players who shot themselves in the hearts, allowing their brains to be studied postmortem, have a way of making you rethink a love of the game.

The centerpiece is about Omalu discovering CTE, after performing an autopsy on Steeler Hall of Famer Mike Webster, the center and captain of those great Pittsburgh Super Bowl champions. When I was an undersized right guard giving away 50 pounds on high school Saturdays, loving every second of it, Webster was a hero, perfect in technique, leadership, effort and leverage.

But Webster's brain paid for it. He ended up in a truck parked in a lot when he was 50. In the movie he died in that truck, in real life he'd been taken to the hospital, so some critics point to this minor inconsistency and others in the film, and say "Concussion" falls short.

I wonder if the nitpickers -- ripping the movie so as to send thrills up the leg of NFL Commissioner Roger Goodell -- ever played the game? Because there is truth in "Concussion" and those who've played and loved football will see it.

It happens when Omalu pulls off the road to watch a high school football practice. Two young men are in a tackling drill, running at each other at full speed, fit and strong and quick and determined.

Their bodies lean forward, eager, full of joy at what's to come. What's coming is the violent expression of will. And anyone who pretends that violence isn't joyful on a football field is a liar.

The joy of the violence is the ugly and beautiful heart of the game. And so, in "Concussion," the boys run at each other. Their heads collide, because it's football.

Other sports can be risky as well. I'm not trying to outlaw danger or risk.

Soccer is one, and it threatens NFL flesh peddlers because American parents are now opting for soccer. Without little boys smashing their heads in American youth football, there would be no feeder system to provide the NFL with human bodies to ruin.

In soccer, full-speed collisions without pads can be violent. And concussions do happen. But soccer isn't designed to smash young heads against each other. And rugby, a truly rough sport, isn't designed to put head against head. And that's the difference.

My sons play soccer, still, in college. One suffered a concussion this year in a club game that ended his season. But a good doctor, therapy, rest and a protein diet has him back to normal. He wants to play again, because he loves it.

The doctors say that he's healed and as long as there are no symptoms, he could play. We'll talk about it some more.

But first I think I'll take him to the movies.